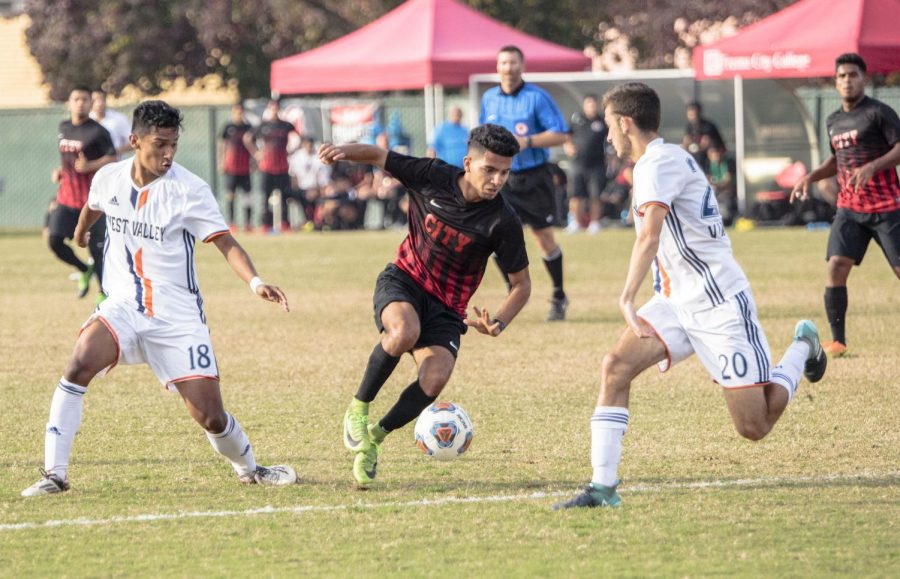 The Fresno City College men’s soccer team walked on familiar territory after defeating West Valley College 1-0 in the third round of the NorCal Regional playoffs on Nov. 25. The Rams move on to the State Championship and will face Mt. San Antonio on a rematch of last year’s final.

The game begin with neither team taking any clear possession of the ball and both teams setting themselves well in their own field. With both teams playing perfect defense, only a few clear chances at a goal were tried and they were from West Valley, but with no clear danger.

The only real chances for FCC came from set pieces like a corner kick that created real danger inside the penalty box for West Valley.

By the end of the first half, the Rams begin to have more possession of the ball and therefore more control of the game.

Once FCC had more control of the midfield, West Valley begin to play with more intensity and started putting pressure on the Rams. This made for a more competitive game from both sides of the game.

The best chance of the game for a score by FCC came when midfielder Alex Covarrubias took a shot from outside of the penalty box that had real danger, but was neutralized by West Valley’s keeper.

The half ended with a 0-0 score and the last 45 minutes of the game was left to decide who would move on to the State Championship.

For the second half, FCC came out with a more aggressive attitude and managed to take the first shot on goal of the half. The game continued to be very competitive with attacks from both sides and with no team overwhelming the other one.

In the 57th minute of the game, forward Manual Lopez took a shot inside the penalty box that got past West Valley’s keeper giving FCC the lead in the game.

After the score, the Rams gained full control of the game and managed to keep the ball in the opposite side of the field. West Valley began to play with more urgency and desperation, trying to make the equalizing goal.

The time ran out for West Valley which meant that FCC came out with the 1-0 victory and the chance to win the State Championship.

“It was a sloppy hard fought game; At the end of the day, it was a tough battle and we came out on top,” said head coach Eric Solberg. “At this point we have to play really well to win, but sometimes you just have to find a way to win.”