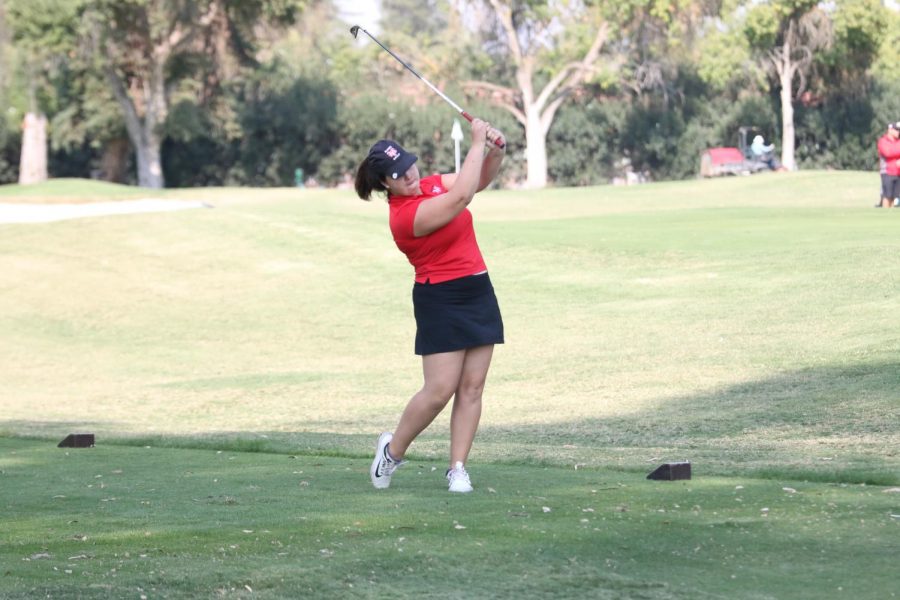 Fresno City College golfer Katelin Eickholt drives the ball off the tee during a tournament held at Sunnyside Country Club on Thursday, Oct. 12, 2017.

Imagine a blaring sun beating down while trying to escape a sandpit with only a stick. When Fresno City College’s Women’s Golf was in this trap, they managed to win against competing colleges at the Sunnyside Country Club on Oct. 12, putting them first in the Central Valley Conference.

The participating colleges were West Hills, Reedley, and Taft. Although they were opponents, golfers showed great sportsmanship and respect for one another.

Although golfers play individually, they work together to get better. It’s an individual sport that asks for much respect.

Head Golf Coach Danny Paniccia expects good things from this season. “We’re going to make it to regionals,” he said. “After that, go to state. That’s our goal right now.”

Destanie Blair’s stroke count was a 90, which was the lowest stroke count of the FCC golfers. Paniccia commended Blair on her performance, saying Blair is “our number one” player.

FCC’s other golfers stroke count follows Blair’s with Alyssa Geiger’s stroke count at 96, Katelin Eickholt’s at 97,  Zakira Jones’ at 103 and Maddie Kizirian’s at 111.

The team’s combined performance made them victorious at this CVC tournament.

Paniccia said the team’s greatest strength is “driving the ball off the tee.”

He says the team is improving, especially with their short game. “We do a lot of work on that and we have our practices,” Paniccia said. “That’s our main focus. I think we tend to waste some strokes around the greens.”

FCC’s total stroke count amounted to 386 and they had a score of four.

“We’re working the hardest that we can,” Paniccia said, “to see if we can improve and peak at the right time.”

The Fresno City College men’s golf team finished third with a combined team score of 398, behind Reedley and Modesto in its first conference meeting...

Garrett Lewis was born in Fresno, California with a passion for sports. But after leaving Fresno City College Lewis has focused his attention mainly o... 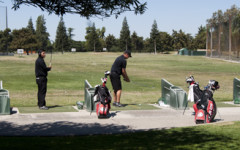 Fresno City College Golf Excels on the Course and Off

Fresno City Golf Coach Rhonda Williams is ready to lead her group of golfers on a quest to capture a championship. The six women on the squad are exci...

The Field of Play