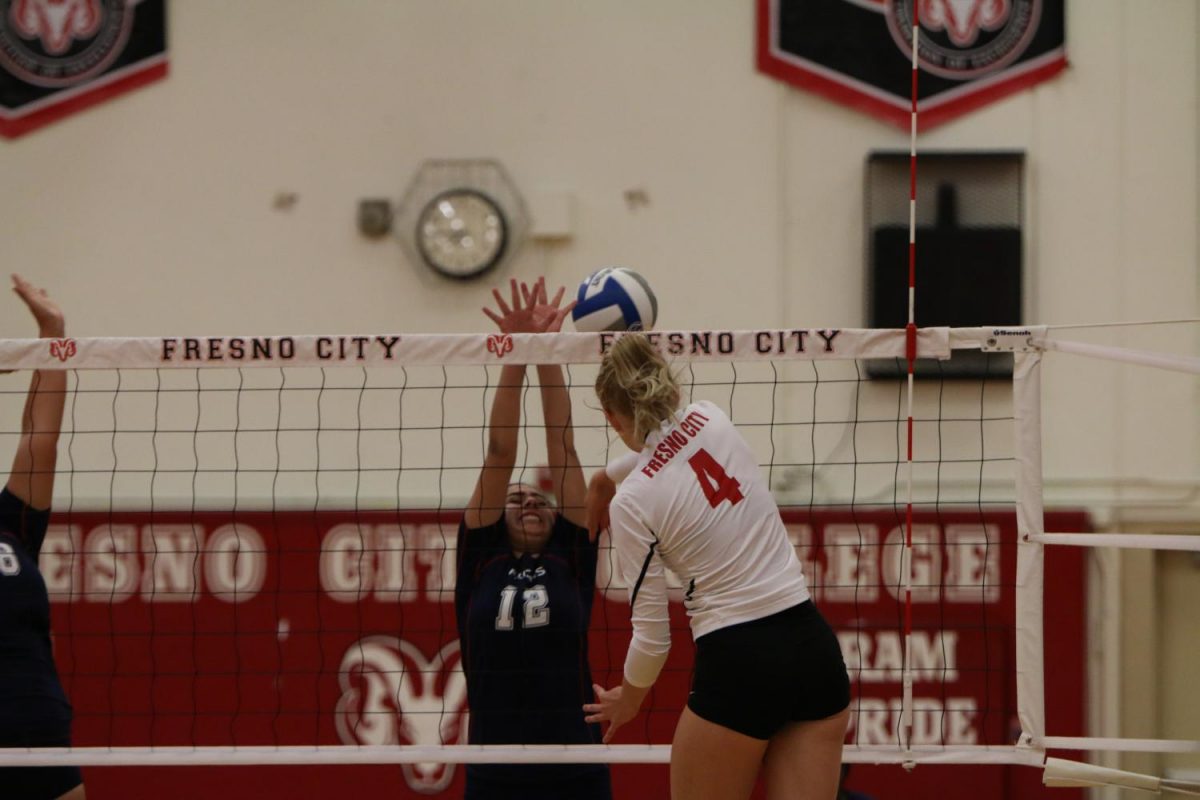 Fresno City College right side hitter Mia Corippo is spiking the ball in front of a West Hills player during the Sept. 20, home game.

The Women’s Volleyball team defeated West Hills College 3-0 in their first home game of the season Sept. 20. These powerful players returned with a great performance after a tough loss against Sacramento City over the weekend at Cabrillo.

The Rams started the match strong. They performed well, blocked spikes, spiked against West Hills, and earned several aces. The Rams won their first set with a score of 25-12.

The first match led to a greater second set where our Rams dominated West Hills. West Hills keeps up an intense rally against Rams, but FCC takes the match win with a score of 25-5.

The third set began with a rough start and West Hills took the lead by several points at the beginning of the set. It seemed likely that they were going to make a comeback. However, the Rams reconvened during a timeout and they  regained their composure, got their head back into the game, and took back the lead.

The Rams continued to widen the score gap and when they reached match point, the crowd began chanting again. Outside hitter  Brittany Olivares earned the winning point, and finished the game at 25-18.

“I thought we played pretty calm. First two sets, we served aggressively. We were able to stay in our system of play,” Keiran Roblee, head volleyball coach. said. “Third set, we had a lot of unforced errors, but we didn’t let it rattle us and we were able to finish strong with our serving.”

Roblee said the key to Wednesday’s victory was the team’s versatility. Although the number one outside hitter was out, the team changed its line up and remained calm. The win showed that they responded very well.

Outside hitter, Katie Emmerling, performed well on the outside by keeping the ball in and worked the middle with her blocking. Emmerling was a standout player throughout the game. She amounted 8 kills, 13 digs, and 2 aces.

Roblee applauded middle blockers, Shanea Laird and Sarah Milliser, saying “Our centers always do a really nice job of distributing our offense. I’m always pleased with their performance. They kind of run the show for us.”

“The team was happy to finally play at home after always being on the road.” Coach Roblee said.  “They are excited to get ready and in the right mindset to open up conference.”