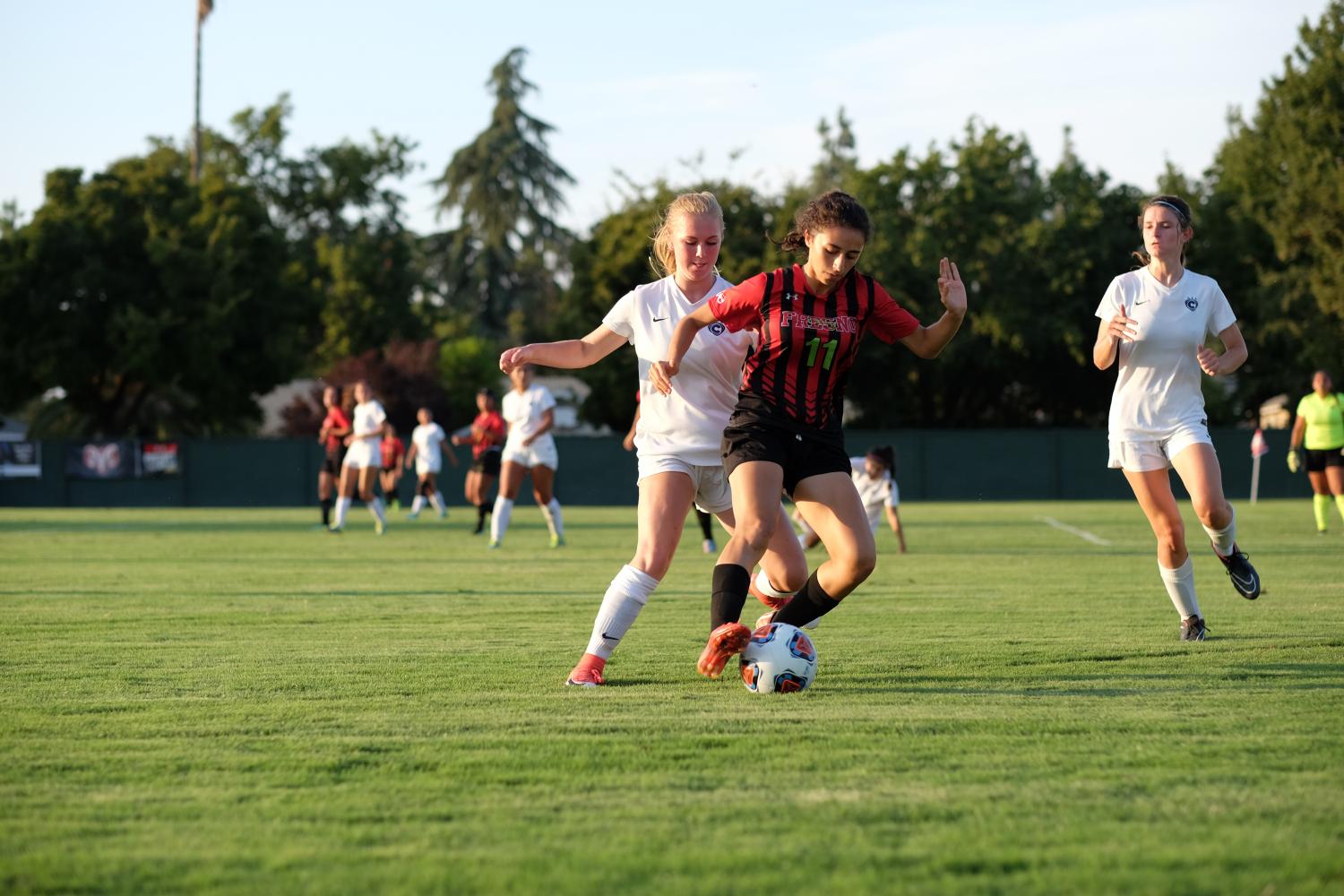 Franki Navarro covers the ball from Cyprus College players during their home opener on Wednesday, Sept. 6, 2017.

The Fresno City College women’s soccer team defeated visiting Cypress College Chargers in a dominating fashion, with a score of 7-0 this past Sept. 6.

The Rams were back in action following a 5-0 drubbing against the Moorpark College Raiders. On the other hand, the Chargers are coming off a hard fought game against San Francisco College in which they were defeated 2-1.

The game got out of hand rather quickly as the Rams imposed their will early on in the game.

In the first 8 minutes of the match, the Rams already created four scoring opportunities but were not able to capitalize.

Eventually, the relentless offensive pressure was too much for the Chargers to handle as the Rams turned up the heat.

Left-wing Sophia Zertuche seemed to bare the majority of the playmaking responsibility. Although officially only registering 1 assist, Zertuche repeatedly sent passes from the left wing for scoring opportunities. At the 10 minute mark, center Ariana Rodriguez was the recipient of a tremendous volley and scored the game’s first goal.

Two minutes later, center Jasmine Garibay sent a whistling shot from the top of the box that found itself in the top left corner or the net.

It wasn’t until the 25 minute mark in the first half that the Chargers were able to get a shot on goal, which speaks to the defensive brilliance of the Rams.

Rams weren’t done just yet— they capped off their first half offensive brilliance with a goal in the 34th minute by right wing Makayla Pena and another one in the 38 minute by forward Taylor Alkire.

At the end of the first half, the Rams held a commanding 4-0 lead.

The Chargers seemed to start the second half with a bit more fight, but any attempts were quickly thwarted by the Rams stifling defense. The Rams quickly went back on the prowl with a quick score by forward Raina Wristen at the 54 minute mark, who also notched a an assist in an earlier goal by Garibay.

Two minutes later, defender Cassie Sandoval assisted on a goal scored by forward Anissa Wilson. Sandoval was also able to assist the last of the Rams goals of which was the second scored by Alkire in the game.

“Last year we struggled to score goals. One of our big emphasis in recruiting this year, was to find people to score,” Rams coach Oliver Germond said after the game.

“I feel like we’re doing a good job, not just scoring, but playing the way the coaches are teaching them to play,” said Germond. “That’s what makes this team so good in the fact that they are going out of their way to do what we have been working on during practice.”

The coaching staff certainly seems to have the Rams playing in post-season form already as they have tallied 23 goals and given up zero in their first four games this year.

FCC will play their next game on the road on Sept. 8 against Solano College.