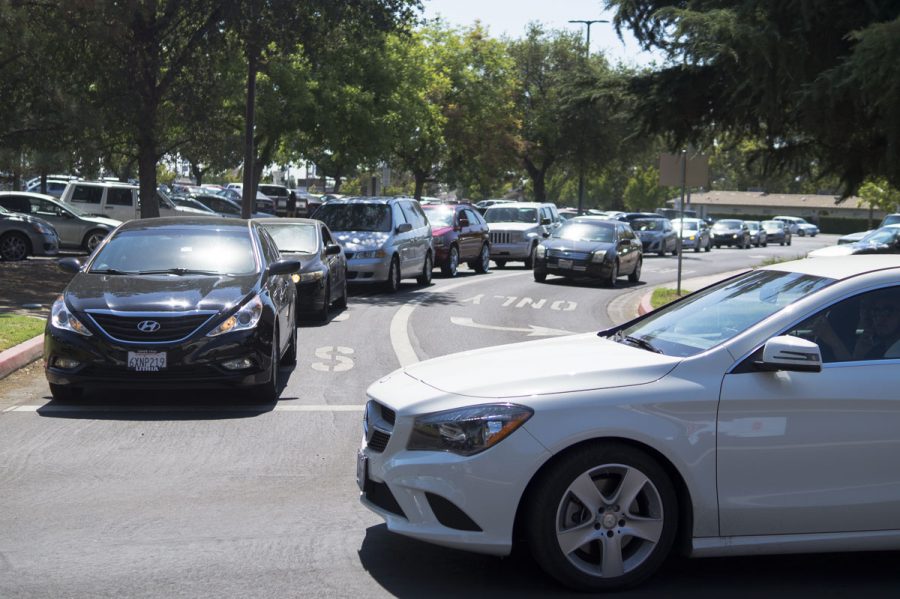 Cars line up on the road from the McKinley entrance as students attempt to find parking at Fresno City College on Aug. 15, 2016.

A controversial districtwide solar panel project was passed during the SCCCD board meeting on March 7 at Reedley College.

The board voted four to three to OK the project for construction, which would take place during the summer.

Every campus in the district is scheduled to get solar panels, but according to Christine Miktarian, associate vice chancellor for business and operations, the only campus showing resistance to the project is Fresno City College.

Miktarian said the solar panels are proposed for parking lots B, C and D, which face McKinley Avenue.

Miktarian said she doesn’t understand the opposition for the project because it seems “almost too good to be true” for the district.

She said the installation of the panels is free, and the company, Forefront Power, will maintain the panels during the 20-year lease. It is expected to save FCC about $500,000 on its PG&E bill during the first year, and $8 million over the course of the lease.

Part of the opposition is because a new parking garage is in the works, but Miktarian said the parking garage has always been slated for parking lot E, near Carls Jr. The solar panels are not being installed in lot E for that specific reason, said Miktarian.

Among the three members of the board of trustees who voted against the project, Arias, said he has gotten nothing but opposition from neighbors.

Some of those neighbors showed up at the meeting on March 7 to voice their concerns about the project.

Miktarian said there has never been a plan to build the garage in lots B, C and D because of space restraints.

Arias said he is opposed to using a solar firm that is not local to the area. Miktarian said the bidding process was very competitive and that no other company provided a fixed rate over the 20 years like the company that won. There is also an educational curriculum that the company is offering that would teach students about the solar panel construction.

Arias is skeptical about the the projected benefits of the solar project to students.

“The only benefit as it’s currently written for students and staff is that it’s going to give you shaded parking,” Arias said. “The millions of dollars that we save are going to go to the general fund for the whole district.”

Arias said that parking permits will continue to increase every year if something is not changed.

Four electric vehicle charging stations will also be installed and Miktarian said it is possible that they could be free of charge to use for students and staff. Arias isn’t sure this would come to fruition.

“They see that as a revenue generator,” Arias said. “Here we are generating more revenue from students when we’re not alleviating any of their parking issues.”

Arias says a better way to install the solar panels is by using rooftops.

“In most urban colleges,” he said, “solar panels are done on rooftops of buildings and not in parking lots because there’s very little parking space.”

Arias and other opposing board members say they have not had enough time to look over the project before voting on it.

Miktarian said although there was talk of the project in past board meetings, the official proposal was only brought to the board in the February meeting. “We started discussions with the vendor last August,” she said, but that there is good cause to move forward quickly.

The California Public Utilities Commission announced in January that it was changing its peak hours to the evening instead of midday for the district. Miktarian said that because the district is beginning a new project, it applied to have its old rates grandfathered in, saving the district money on electrical costs.

The other concern, Miktarian said, is what students would do for parking during construction. She says as of now, they are aiming to begin construction in the summer and have it finished before the fall 2017 semester.

“We’re trying to accelerate our schedule. That’s why we’re saying we need to move forward,” Miktarian said. “We have a great plan here.”