Is Amy Coney Barrett really a big threat to America? Yes. Here’s why. 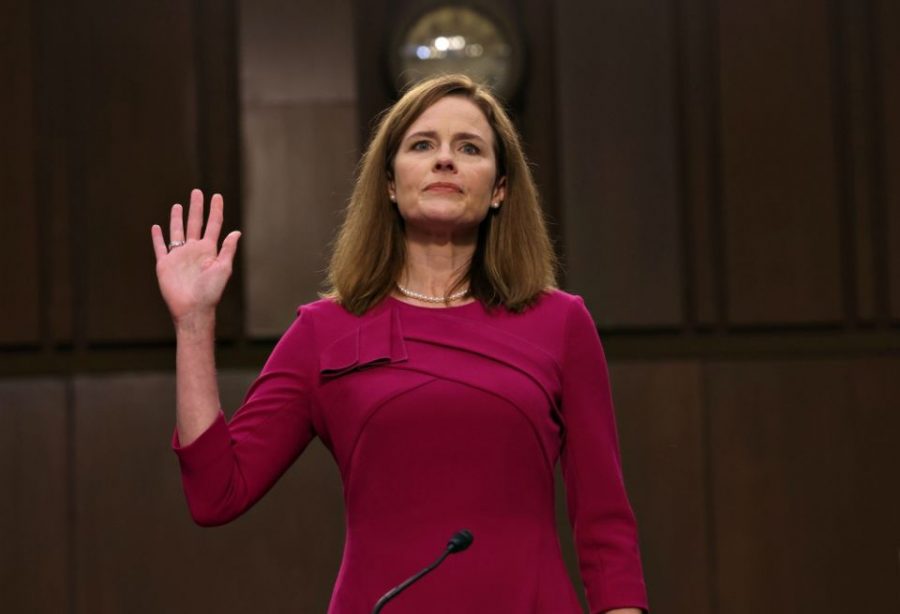 After the death of Ruth Bader Ginsburg, many wondered who would replace the beloved Supreme Court Justice.

To nobody’s surprise, Ginsburg’s seat was quickly filled by President Donald Trump’s nominee, Amy Coney Barrett, despite Ginsburg’s “most fervent wish” being to not be replaced until the next president took over.

As of Oct. 27, Barrett, a former Norte Dame professor and Appeals Court Judge, officially became the third Supreme Court Justice brought in during the Trump administration.

Given Barrett is a Catholic and Republican, her views on certain issues are seen as a big threat to the current legislative system in the United States.

The beliefs of former Supreme Court Justice Antonin Scalia, whom Barrett served as a clerk for, seemed to have rubbed off on Barrett, according to the BBC.

Like Scalia, Barrett considers herself an originalist meaning she believes the United States Constitution should be interpreted the same way the authors intended when it was written and signed in 1787.

Times change and in order to keep up, the Constitution should be seen as a “living document” which means its message can change over time and adapt to new circumstances, without being formally amended.

If the Constitution kept the same meaning as the Founding Fathers gave it over 230 years ago, minorities would be left with very little or almost zero representation or rights in America.

The most prominent example is African Americans, who were only mentioned in the Constitution when discussing slavery and its benefit to white people.

Even then the Founding Fathers did not directly mention African Americans and refer to them as: “other persons” in Article 1 Section 2 Clause 3, also known as the Three-Fifths Clause,  “such persons as any of the states now existing shall think proper to admit” in Article 1 Section 9 Clause 1 and as a “person held to service or labor in one state, under the laws thereof” in  Article IV Section 2 Clause 3.

Since 1973, the case of Roe V. Wade ruled that access to abortion is a constitutional right in the United States.

President Trump promised to appoint judges who are ready to overrule Roe V. Wade, according to The New York Times.

With Ginsburg off the court and Barrett in, many fear Trump’s promise will become reality.

In early October, it was discovered by The Guardian that in 2006 Barrett had signed an ad that stated, “It’s time to put an end to the barbaric legacy of Roe v. Wade.”

Most recently during a senate judiciary committee hearing on Oct. 13. Sen. Amy Klobuchar, D-MN, questioned Barrett on why she did not list Roe V. Wade as a  “super precedent” in a review law article she had written in 2013.

Barrett responded by saying the way she used the term “super precedent” was from a scholarly literature perspective, not necessarily her own.

In those terms, it is defined as “cases that are so well settled that no political actors and no people seriously push for their overruling” according to Barrett.

Her response and previous actions do raise a red flag and show that Barrett might really be the “polar opposite of Justice Ginsburg” as best described by Klobuchar during the same hearing.

For many, including myself, it’s shocking that Barrett and Ginsburg have very different stances on abortion, even though they are both women.

The demographics match up, however what the two women stand for is completely different as a result of their political affiliations.

Many members of the The Republican Party believe they did a great job of confirming Barrett and already see her as an icon.

During a rally Sen. Lindsey Graham, R-S.C., said he wants “every young woman to know there’s a place for you in America if you are pro-life, if you embrace your religion and you follow a traditional family structure — that you can go anywhere” and then went on to praise Barrett.

“She’s got everything. She’s not just wicked smart, she’s incredibly good. She embraces her faith,” he said.

So it appears he was using Barrett as a blueprint for what young women aspire to be like if they want to succeed in America.

Another red flag arose on Oct. 14 when Barrett used the term “sexual preference” when asked about the 2015 Obergefell v. Hodges case allowing for same-sex marriage during another of senate hearing.

Barrett was immediately called out by Sen. Mazie Hirono, D-Hawaii,  who said the term “sexual preference” is not only offensive but, “it is used by anti-LGBTQ activists to suggest that sexual orientation is a choice. It is not.”

Although Barrett did apologize to the LGBT+ community after being called out, the apology is not very convincing when looking into her history.

For nearly three years, Barrett served as a trustee on the board of private Christian schools that held various anti-LGBT policies, according to NBC.

At Trinity Schools Inc., anti-LGBT policies were in place before and while Barrett was on the board.

In addition to barring admission to children of same-sex parents, it was clear that openly gay and lesbian teachers weren’t welcome at these schools.

Trinity Schools Inc. is affiliated with People of Praise, a religious community that Barrett and her husband, Jessie M. Barrett, have been a part of for many years.

Barrett’s position as a trustee of Trinity Schools Inc. or affiliation with People of Praise were not discussed during her senate confirmation hearings.

At the end of the day, with Barrett’s confirmation, there is now a 6-3 conservative majority within the Supreme Court which is very scary to say the very least.

Many democrats such as Alexandria Ocasio-Cortez have begun to call for expansion of the Supreme Court.

By increasing the number of justices, Democrats hope there will be less of an imbalance in political party representation in the court.

“Packing the Court” may sound like a great idea, however it does not necessarily guarantee the Supreme Court will be freed from the grip of either party.

As Sen. Elizabeth Warren, D-MA, said “It’s not just about expansion, it’s about depoliticizing the Supreme Court” and she’s got a point.

The next “best” option I see for the Supreme Court, although this may be impossible, is implementation of ideological or partisan balance requirements.

Such requirements would mean a majority of court members cannot be part of the same political party.

There is no doubt that justices show some partisan bias when making decisions.

So when a certain party holds the majority number of seats, those justices are able to impose their own preferences on a larger scale.

The Supreme Court itself just needs to be repaired so each party’s ideologies will be taken to consideration and neither of them is overpowered by the other.

For now, Americans must deal with Amy Coney Barrett and the rest of the conservative majority who may or may not take away our rights to abortion and LGBT+ marriage amongst many other things.