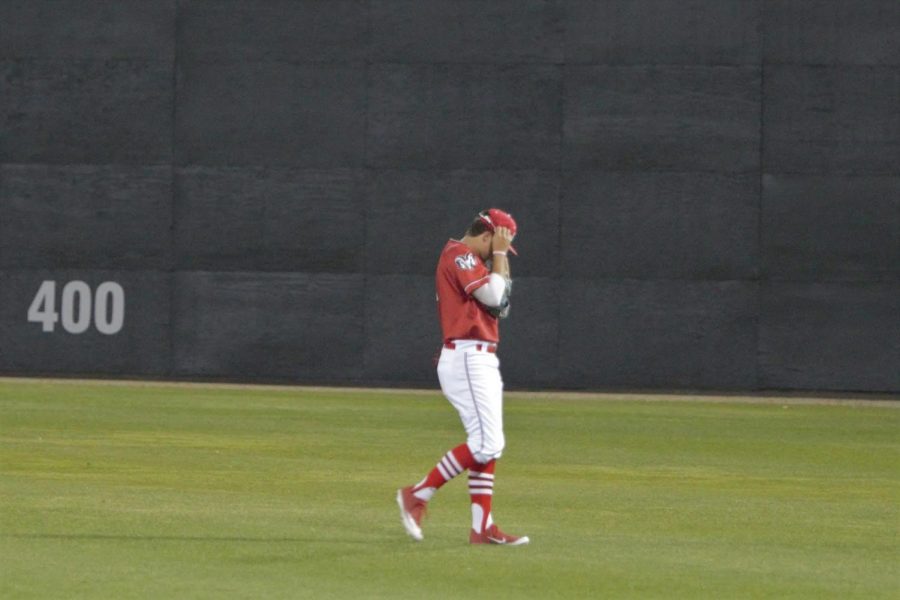 Rams' freshman outfielder Cole Brincefield heads back to his position in right field following a run scoring single by the Sacramento City College Panthers on Feb. 14, 2020. The run was one of three runs scored in the second inning, paired with two runs coming off an error.

The Sacramento City College Panthers came into their brief two game series with the Rams off an undefeated 8-0 start to the season, boasting a .292 team batting average and scoring nearly 11 runs per game.

On a windless Valentines Day, the flag hung listless on the center field pole.

At the plate, however, the wind was gusting. Rather than the prevailing northwestern winds, these winds originated from home plate to the tune of 30 combined strikeouts between the Rams and Panthers.

Each squad had 15 strikeouts in the 9-1 Panthers’ win, and while plenty of of runs crossed the plate for Sacramento City, pitching was not the issue for Fresno City College. Miscues in the field led to the Rams’ defeat.

Rams’ sophomore starter Justin Henry recorded nine strikeouts while allowing only one walk. He gave up three earned runs on eight hits, and while the bases were crowded throughout his six innings of work, Henry limited the damage, pitching well out of the stretch.

It was both mental and physical errors that led to the Rams’ defeat.

“We had a little popup behind second base; gotta catch that 100 out of 100 times,” FCC head coach Ron Scott said, referencing the second inning when, with two outs, freshman third baseman Kade McKechnie blooped a fly ball behind second base. Three Rams’ defenders converged on the play, but when the ball came down, it hit grass before leather and a run scored.

The error was the first of five errors committed by the Rams in the game, leading to six unearned runs.

“Pitching staff was fine,” Scott said. “We haven’t made [fielding] errors all year. We’ll clean it up.”

The Rams’ lineup was held to one base hit through the first four innings, with the lone hit, a slow rolling single back to the mound, coming off the bat of Prieto in the first inning.

Panthers’ sophomore starter Ryan Costeiu retired 10 of the first 12 Rams’ batters via the strikeout before being relieved after 74 pitches by sophomore pitcher TJ Smith, who recorded 3 strikeouts of his own in 2⅓ innings.

For the Rams who came off a 16-2 win over Hartnell on Wednesday, Feb. 5, the lack of run support was surprising, with the lone run coming on the heels of sophomore catcher James Bell following a double by sophomore catcher Noah Perez.

“First inning we had second and third, no outs. We struck out three times, and then they came out, hit a little blooper popfly,” Scott said. “We didn’t catch it, three runs scored, we’re down 3-0 chasing all night against some real good pitching.”

With the loss, the Rams’ record drops to 7-2 on the young season. The Rams will host the Panthers again for a 1 p.m. matinee on Saturday, Feb. 15, before heading on the road to face Contra Costa at 2 p.m. on Tuesday, Feb. 18.

Update: FCC defeated the Panthers 5-2 on Saturday, Feb. 15 to earn a split in the two game series. The loss was Sacramento City’s first loss of the season and also tied the fewest runs scored in a game for the Panthers. The win improves the Rams’ record to 8-2 before heading on the road for a two game road trip.

The Rams’ next home game will be on Saturday, Feb. 22 when FCC faces off against Monterey Peninsula at 2 p.m.