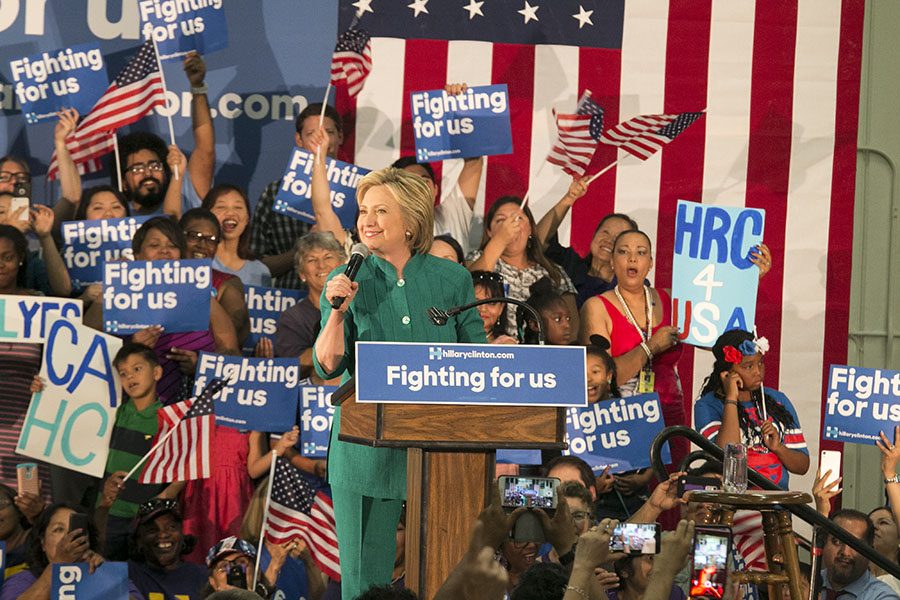 Hillary Clinton campaigns during the primaries at Edison High School in southwest Fresno on June 4, 2016.

With less than seven weeks left until Americans elect a new president, the chair of the Fresno City College political science department describes this presidential election as “volatile.”

It’s no secret Democrat Hillary Clinton and Republican Donald Trump each have their issues, some scrutinized more than others. Clinton’s email scandal can’t seem to fade while Trump’s immigration stances continue to cause controversy.

Mark Trezza predicted that Clinton would ultimately be elected to the presidency on Nov. 8.

“I think at the end of the day, just as it was for [Barack] Obama both times, it will be an easy democratic win,” Trezza told the Rampage in November 2015, nearly one year ago.

Fast forward to September 2016, weeks before the election, Trezza paused and said, “From now through the election, it will seem close.”

A close eye is on the debates, with the first one hosted on CNN Sept. 26.

Trezza said the race seems close because there are only two candidates who realistically can win. He said voters who think Trump can’t win should understand he has the same chance to become the 45th president as Clinton.

Trezza explained the strengths and weaknesses of each candidate’s.

“For candidate Trump, his biggest achilles heel is himself. At times, he is his biggest strength, as often his biggest weakness,” Trezza said. He added that some of Trump’s statements are very questionable and he has a number of head-scratchers that come from Trump himself “100 percent” and not from his campaign team.

Trezza added that Clinton’s weakness could be exaggerated  by the “anti-incumbent” feel in the 2016 presidential politics, and if voters want to see a different party in the Oval Office.

“Even though she’s not actually in office…four years ago, she was secretary of state, and she was a former first lady for about eight years,” Trezza said. “Therefore she’s been around.”

Trezza said that Clinton is viewed as the “establishment” candidate, and her ties to the current administration could cost her the election.

With November just around the corner, Trezza’s prediction remains the same as last year, and he described the Clinton campaign as “plodding along.”

Trezza’s advice to FCC students is to “go out and vote.”

The political science professor said students must “write the outcome” of their own stories, and  that if students don’t vote, they shouldn’t “complain when you don’t like [the outcome].”