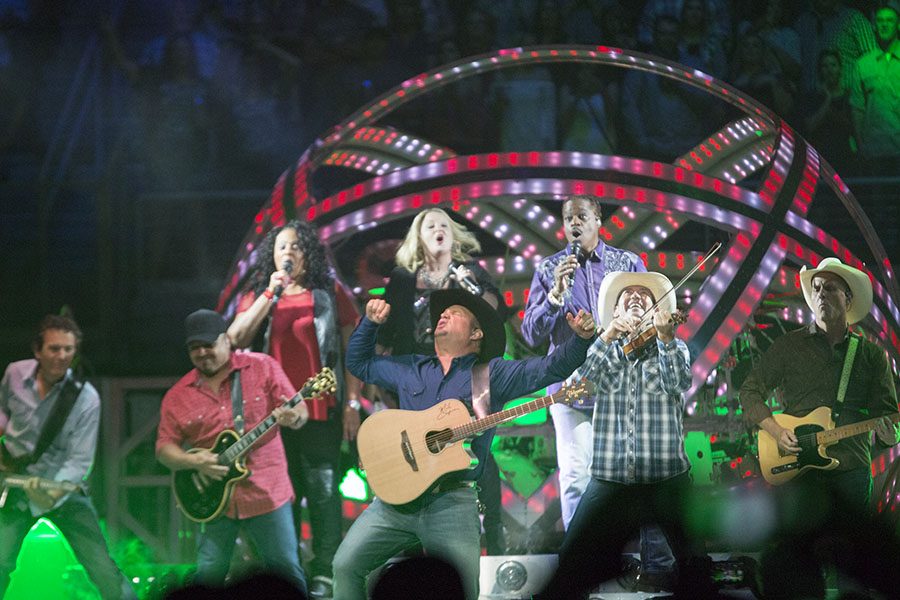 Country Singer Garth Brooks performing with his band at The Save Mart Center on Sept. 23, 2016. Larry Valenzuela

On  the opening night of the Garth Brooks World Tour with Trisha Yearwood n Fresno, Brooks showed that being 54 years old is nothing more than a number, especially when you have an incredible crowd and performers you love.

Sept. 23 was the first time Brooks performed in Fresno in 19 years.

Contrary to expectations, the country show was so action-packed with lights, fog, a cage around the drum kit, plus the 54-year-old Brooks running, jumping and climbing around the stage.

The show was nothing less than pure excitement and positivity — the crowd and opening performers, but especially Brooks and Yearwood who radiated positive energy and praise for their fans and supporting acts.

“Never in my wildest dreams have I seen somewhere go this hard this fast,” Brooks said during his performance.

At the end of the evening, Brooks took the time to take song requests from fans and also honored a few of his musical idols: Keith Whitley, Merle Haggard and Billy Joel.

Yearwood and Brooks gave an electrifying and intimate performance of “In Another’s Eyes.”

Before Brooks was to perform another song with Yearwood, she announced that Brooks had just earned his seventh Diamond record (an album that has sold 10 million copies), making him the first artist to ever achieve more than six. Brooks has surpassed the Beatles as the top performers who have six Diamonds.

Yearwood’s short solo performance included “How Do I Live,” donning the stage with a glittering diamond microphone. Yearwood introduced the kiss cam with “If you’re here with someone you’re not supposed to be here with, now would be a great time to get a beer, I won’t judge,” followed by the single “She’s in Love with a Boy,” as the screen lit up with happy couples kissing.

Mitch Rossell, country artist from Tennessee, opened the show with a short-and-sweet set, mostly from his most recent album “Raised by the Radio.”

Following Rossell was Karyn Rochelle, a backup singer for Garth Brooks and Trisha Yearwood. The North Carolina native is a singer songwriter and has penned several songs for popular artists such as Kellie Pickler, Ronnie Milsap, Reba McEntire and LeAnne Rimes.

Rochelle performed songs from her self titled debut album with a girl power attitude, including “Jezebels,” Rochelle described to the crowd as “a song for women who have wanted to beat another woman’s ass.”  Rochelle also performed “Red High Heels,” originally written for and performed by Kellie Pickler.

Joe Nichols opened right before Brooks, delivering a humorous performance playing several number one singles like “Tequila Makes Her Clothes Fall Off,” “Sunny and 75” and a country cover of Sir Mix-a-Lot’s “Baby Got Back.”

The Garth Brooks World Tour with Trisha Yearwood’s last performance in the four-show stop in Fresno was on Sunday. Their next stop is Orlando Florida on Oct. 6, 2016.

Brooks thanked the crowd, “for the greatest opening night I’ve ever been a part of.”

For an exclusive interview with Garth Brooks and Trisha Yearwood, head to therampageonline.com