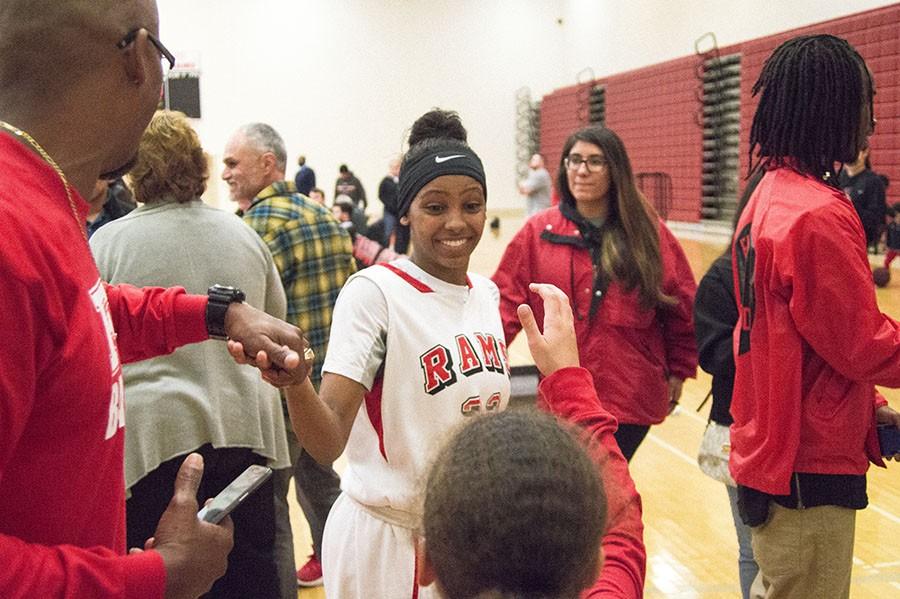 The Fresno City College Rams (29-3) will be competing for a spot in the State Championship game tonight against Mt. San Antonio (32-1). The game will be played at Las Positas College in Livermore, California. Tipoff is at 7 p.m.

The game got off to a slow start scoring-wise because of the intensity and maybe a case of nerves for both teams. Sierra was able to gain a quick 5-3 lead, causing FCC head coach Brian Tessler  to call a timeout with 5:04 left in the first quarter.

After the timeout, the team increased its defensive pressure, resulting in turnovers by Sierra and leading to points for the Rams. Sophomore guard Jasmine Black came off the bench and scored 7 points in the first to help the Rams take a 14-7 lead to finish the quarter.

“I think it just kind of gives them[teammates] that positive attitude,” Black said. “Seeing somebody come off the bench and produce, I feel like they feel like they can do the same thing.”

Sierra was able to pull within 4 halfway through the second quarter, but that was the closest they would get to the Rams the entire game. After starting the game in a 2-3 zone defense to start the game, Sierra switched to man-to-man in an attempt to slow the Rams down.

Sierra head coach Brandie Murrish said defense in the second quarter was the biggest difference of the game.

“In the first half, they [Rams] were hitting great shots and we [Sierra] were definitely not doing a good job of containing them,” Murrish said.

At halftime, the Rams were ahead 49-26. Sophomore guard Madison Barnes and Jasmine Black led the Rams at the half with 12 points apiece.

On the other side, freshman guard Isa Conde provided three 3-pointers to lead the way for Sierra with 9 points.

The Rams’ defense got off to shaky start to begin the third quarter, allowing a 10-point run by Sierra to make it 49-36, causing a timeout to be called by FCC.

“I kind of got upset but I knew I couldn’t get upset because that brings frustration,” Black said.

“Everyone starts to see the negativity so I felt that we needed to get people in there to get it going back up and go from there.”

The run was stopped when sophomore guard Toni Edwards was able to knock down a shot. After that, the Rams were able to seize control of the game again and at the end of the third, FCC led 55-41.

“I thought we came back, regrouped and played a good fourth quarter. We knew Sierra was going to make a run, therefore we knew we had to respond with a mini run of our own,” Tessler said.

With 2:41 left in the fourth and the score and with the FCC leading 67-49, Sierra began fouling in an an attempt to slow down the game and try to cut into the lead. They would pull within 9 points and that is how the rest of the game would go. The final buzzer sounded with a score of 71-62.

“We played like a team, and we came out, and we wanted it more,” Black, who finished with a game-high 17 points, said. “Even though we made some mistakes, we pulled together as a team and we just came out and gave it to them [Sierra].

“This will mark the sixth time in nine years the Rams have made it to the state tournament,” Murrish said. “We’re really happy for Fresno, and we wish them the best of luck.”