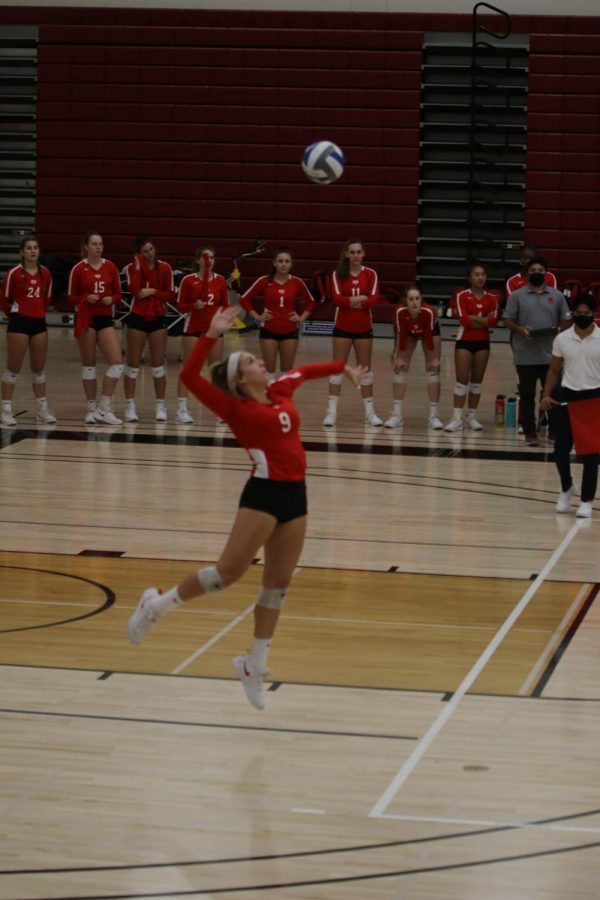 Lexi Pagani serving the ball at the FCC vs. Reedley game on Sept. 22

This lands the Rams in first place of the conference with a 4-0 mark and 13-2 so far this season, according to the women’s volleyball schedule.

In preparation for this game, the Rams focused on the offensive spread, the vision and set selection, according to Women’s Volleyball Head Coach,  Kieran Roblee.

For this game, she wanted the team to focus on hitting efficiency, minimizing runs and preventing the Tigers from getting any momentum.  The goal was to not let the Tigers get three or four points in a row.

In the first set, Sophomore Middle Blocker, Diamond’nigue Young, took over with several hard spikes.  The strategy, to minimize runs and prevent momentum, worked well and led the Rams to a 25-6 victory.

The Tigers had a different flow than the Rams but the team kept its pace and didn’t slow down.

The second set started off with a point from Sophomore Setter Victoria Custodio. Outside Hitter Freshman, Kylie Kerney also contributed with an ace and a spike.  The Rams dominated this set as well winning 25-11.

Freshman Outside Hitter, Lexi Pagani, dominated the last set with several aces and spikes, leading the team to a 25-11 win and completing the sweep.

Despite these two wins, Roblee believes the team can get better, if they can execute in serve, receive and not get into long rallies, as that’s always an advantage for the team.

For the next game, Roblee said the Rams want to practice on their offensive spread, meaning the setters seeing what the blockers are doing on the other side so they could create matchups.

“Our vision and set selection is getting better.  We’ve also enjoyed seeing the array of us not attacking out of the front row and using the back row as well.”  Roblee said.

When asked how it felt to defend home court, Roblee said the team has a determination to defend their home court, no matter who they face, it could even be the women’s national team.

In addition to how successful the season has been, Roblee feels it’s just been awesome to have friends, families and fans back in the stands again.

“Being back together and enjoying the day is one of our biggest focuses because we don’t know what might happen tomorrow,” she said.  “We’re just focused on being present and enjoying our company and laughter.”

According to Roblee, FCC will host the California Community College Athletic Association Volleyball Championship later this year with a goal of playing in it.

Volleyball’s next home match is on Friday, Oct. 1 at 6 p.m. against West Hills Lemoore.