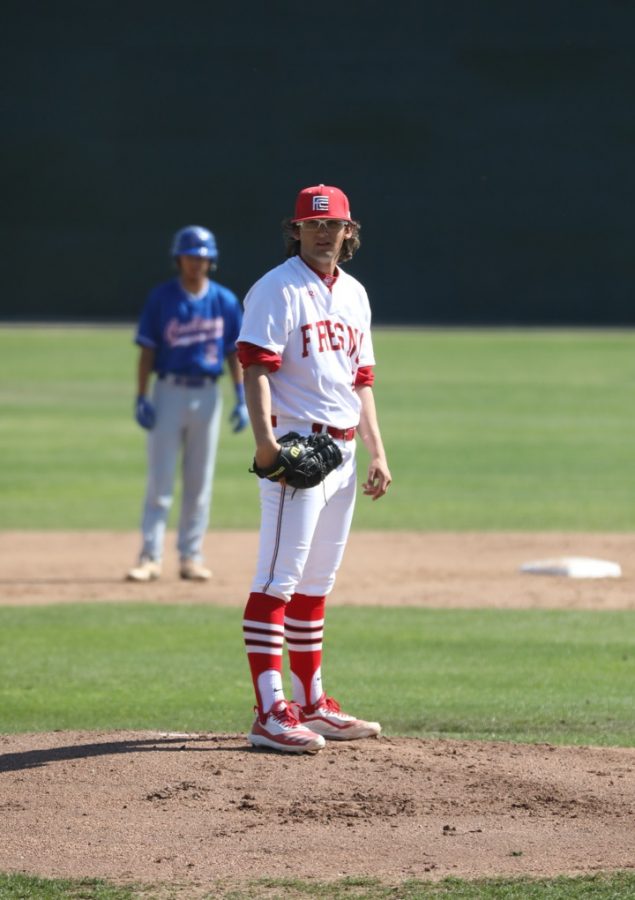 A tall, lanky lefthander stares from the pitcher’s mound, picking up his catcher’s signs.

His sleeves are just a bit too baggy, and his stirrup socks a bit loose. Unmanaged locks of hair billow out from his hat in all directions, and his glasses hang onto his nose like a rock climber that’s just looked down.

Marcelo Saldana is no stranger to facing batters in full counts, and here he is again.

Someone from his dugout yells “Best pitch right here!”, so he rears back and hurls a slider that bends in for strike three and the inning is over.

Throwing a slider in a full count requires confidence, and with all the things that make Saldana stand out on the field, his enigmatic confidence characterizes him and carries him to success.

In the 2020 spring baseball season, Saldana went 5-1 in seven starts for the Fresno City College Rams, all as the Saturday starter.

He amassed 34.2 innings in which he registered 30 strikeouts and maintained an 0.78 ERA, good for first in the state among CCCAA performers with at least 26 innings pitched.

That success is yielded by a blend of precise preparation and a reformed, matured mindset.

“I feel like I’ve been getting bigger and stronger, and my mindset has been opening up a lot from all the different coaching and people I’ve been playing with,” Saldana said.

“I just realized that in order for me to be successful, I need to have a positive mindset, and I need to make sure I know that I need to be dominant,” he said. “I need to throw strikes. I need to have the hitters put the ball in play and just trust my defense and trust my team as a whole.”

All three of Saldana’s pitches are good, but none stand out far above the rest, and that’s the way he wants it. He said he mixes his repertoire equally, never allowing hitters to expect one pitch more than another in certain counts.

“I feel like I can throw all three pitches for strikes in any count, especially my changeup,” Saldana said. “They’re expecting the fastball when you’re down 2-0 or 1-0. And then when you throw that changeup, they’re just off-balance.”

That deception is key for Saldana when his approach isn’t to overwhelm any of the hitters; it’s to attack them relentlessly. And the only way he sees he could do that is if he has full trust in himself and his team.

Saldana plays with a strong conviction in himself and a sensitive feel for his surroundings. One day without full trust in his success can lead to an unraveling for the whole ballpark to see.

That day came on Feb. 22 against Monterey Peninsula, in which he walked four batters and allowed three runs to score before he ever recorded an out. Ironically, he felt great in the bullpen, but things changed when he got on the mound.

“Then I got into the game and my mindset was just a little off, and I couldn’t really pick a spot to throw to,” Saldana said. “It just felt different, not like how I usually feel when I’m commanding well and I’m throwing all three pitches for strikes.”

Saldana would bounce back and continue his dominant season, all the way up until March 12 when it grinded to a halt.

Saldana and his teammates were in the training room before their 3 o’clock game against Porterville when he got a heads up text from a friend playing at Fresno State explaining that the NCAA season had been suspended and to watch for theirs to be next.

“Going up to the field, it was really dead and no one from either team had any energy warming up or playing catch, things like that,” he said.

Energy and expectations were low when FCC head coach Ron Scott called the team together to announce that their 17-3 season would be suspended for two weeks.

Only one week later on March 19, it was cancelled entirely due to concerns for COVID-19.

Saldana’s season was upended, but he’s since made efforts to do what he can to stay ready and stay positive.

“I’m just trying to work out and play catch as much as I can and stay busy with baseball so that I’m ready just in case something happens,” he said. “I just want to be ready and keep getting better. I don’t want to stay home and get worse.”

In usual fashion, Saldana changed his mindset to one that best suits his situation. He’s convinced he’ll find success regardless of how good his pitches are, how daunting the opposing lineup is or whatever ordinance keeps him from playing with his team and coaches.

When he’s not working at Save Mart or playing Fortnite at home, Saldana’s working out with bodyweight exercises, and meeting up with freshman Alec Flores and sophomore Zackary Sorondo to throw bullpens and stay loose.

He keeps in contact with coaches and teammates through group messages and communication apps like BAND, where coaches send motivational messages and keep up with their players’ health.

Everything for Marcelo Saldana is a matter of mindset, and his is unrelenting. The self-assured lefty now stares down a new challenge, and he’s already looking to sit it down and come back even better in 2021.

“Honestly, for next year it’ll just be a reminder for what I can be and how I can accomplish things,” he said. “It just makes the bar go higher for next year.”