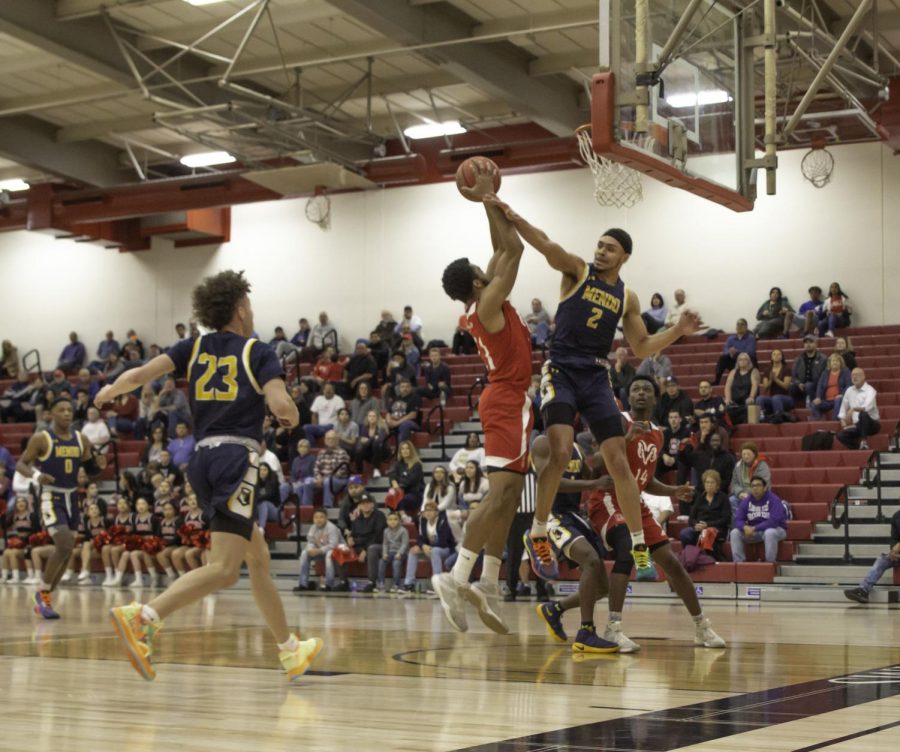 The game was the second meeting between the two teams, with the first contest also going to the Rams in the form of a 109-106 double-overtime win on Dec. 14 of last year.

This game would prove to be a different story.

After coming out of the gate with acrobatic and sometimes violent energy, Mendocino kept it close throughout the first ten minutes of the game, matching the pace of FCC and, at times, displaying athleticism rivaling an all-star game exhibition.

Ten minutes into the game, however, two technical fouls saw an already rowdy crowd get even rowdier, when they went in favor of the Eagles. A flagrant foul was initially called when a Rams’ player initiated contact said interim head coach Nick Podesta. The contact was followed by a second technical foul for contact after the whistle.

The fouls had the potential to change the entire pace of the game, but following three of four missed free throws, the Rams’ came out seemingly energized and reinvigorated.

“We had two players in that same possession that picked up their second foul, so I think it thrust other guys into a little bit of a different situation having to play some extended minutes,” said Podesta. “But again, our guys stepped up like they always have all year.”

One of the players who stepped up was sophomore guard Keshawn Bruner, who tallied 28 points. Bruner, who leads the team in PPG and minutes, came off the bench against the Eagles.

Alongside Bruner, freshmen guards Marcus McCutchen and McKay Bundy were also in double figures, with McCutchen tallying 12 and Bundy tallying 10 points in the contest.

Contrary to the Rams who had 69 points from players not named Bruner, the Eagles scoring relied on the offense of freshman guard Lesown Hallums Jr., who recorded 16 points on the night, and sophomore guard Landon Garcia-Floyd with 21.

“They [Mendocino] can really, really shoot the ball,” Podesta said. “One of the things that we wanted to do was make them bounce it a little bit more than they’re comfortable with.”

Podesta also emphasized the importance of keeping them out of rhythm, forcing the Eagles to work deep into the shot clock to get off attempts.

A point of emphasis was also the Eagles struggles from the free throw line against an aggressive defensive effort from the Rams who played a very physical game defensively. Mendocino saw only nine free throws fall on 27 attempts.

“Just from playing fatigue you start to see that kind of stuff at the foul line,” Podesta said. “Overall, I think the pace of the game maybe accounted for some of that.”

The Rams look healthy heading into their fourth round and potential final four berth, as sophomore guard Ronald Agebsar returned from several weeks being sidelined. Agebsar displayed electrifying energy in the final minutes, capitalizing on an exhausted Eagles team with two electrifying dunks, padding the lead and sending the crowd into a frenzy.

The Rams move on in the playoffs to face the LA Valley College Monarchs on Friday, March 13 at 7 p.m. in Lemoore. Western State Conference Champions LA Valley comes off an 83-81 overtime win, boasting a 23-5 overall record.