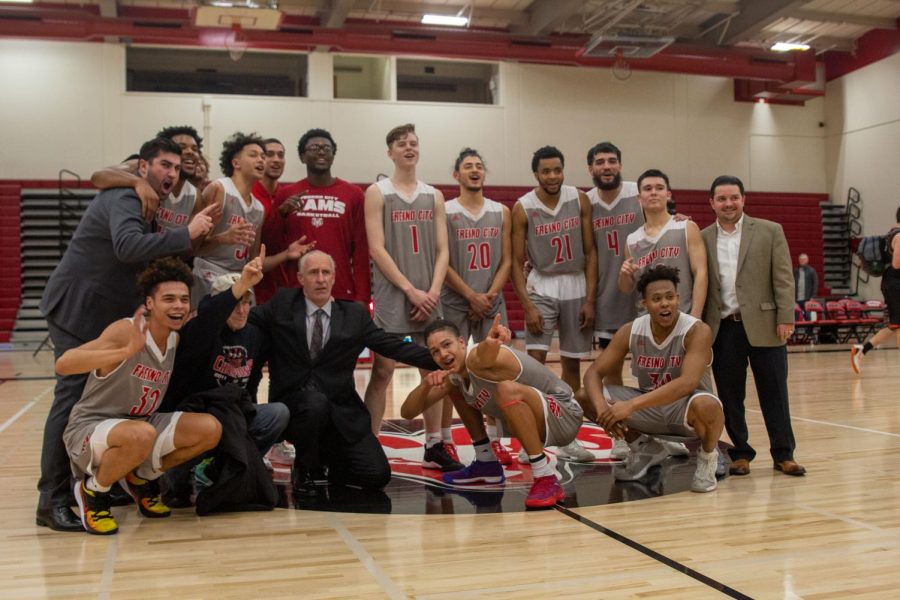 Men's basketball head coach Ed Madec celebrates the Rams' win over Reedley College on Wednesday, Feb. 19. The win left the Rams one away from an undefeated mark in conference play for the second consecutive year. Their final win against Mercerd college was credited to Madec, rounding out another undefeated conference season.

Behind the serious steel-colored eyes and the slick backed hair of Ed Madec lies a man with 14 consecutive conference championships and years of wisdom. Madec became the head coach for Fresno City College’s men’s basketball team in the summer of 2006 leading the Rams on a road to success ever since.

On the court, Madec is known to keep his composure and prides himself for treating the game of basketball and other people with integrity and honesty.

Madec looks intimidating from the outside, however, his coworkers describe him as the exact opposite. To demonstrate, interim co-athletic director Paul Keysaw, who started at FCC the same year as Madec, began to chuckle when he brought out a black and gold Lucha Libre mask decorated with rams horns on the side from his desk – a gift he received from Madec.

Even though winning dominated the headlines, Madec prefers to look at the success in a different angle looking back.

“Over the past 14 years it has never been about winning, it’s always been about helping these men get an education,” he said.

Madec sculpted a culture where hard work is the motto and giving 100% is everything players do, including off the court.

Running a program that prides itself on bringing in underprivileged and under-represented athletes, Madec most loves using his program to help kids grow into men.

“I think everybody [the team], realizes that we have a standard that we want to hold each other to and it’s that we just don’t want to let each other down as long as we’re going as hard as we can,” Madec said after a 115-67 win against the West Coalinga Falcons.

“That’s really the culture. The culture is just giving your all,” he said.

According to Madec, some of his players have gone on to get a master’s degree after playing under him.

His peers and student-athletes all used the same words to describe him, placing words out like heart, dedication and commitment. Madec became known for his work ethic and his ability to change young men’s lives.

Following his dedication to the team Madec was awarded the Central Valley Conference Coach of the year.

Keysaw spoke highly of Madec, saying, “He makes me a better coach and has made me a better coach in the last 14 years through our friendship and working in the same hallway. And watching his work ethic and his desire to be successful has done nothing but motivate me and push me to try to do the things that I’ve been doing.”

A regular day for the men’s basketball team begins with an early morning practice. If there is a home game later that day, the team can be found in the weight room for a postgame workout.

Before the game on Wednesday, Feb. 19 against the Reedley Tigers, the usually reserved Madec took the floor to share some words.

“I want to thank all the people who have been loyal to me, and the program over the years. It’s been one hell of a run,” said Madec.

The Rams closed out their season with a 138-58 victory on Saturday, Feb. 22 against the Merced Blue Devils.