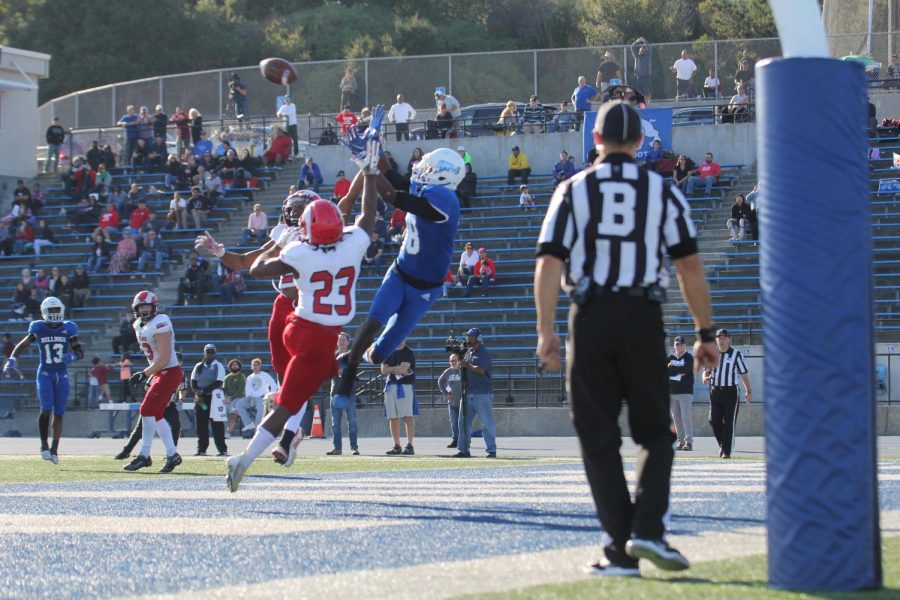 Bulldogs' freshman wide receiver Mason Starling reaches over the Rams' double coverage to secure the Bulldogs' third touchdown in their game on Nov. 23, 2019.

The Rams’ quest for a state championship ended in disappointing fashion on Saturday, Nov. 23, following a shutout loss against the College of San Mateo Bulldogs in the CCCAA Football Northern California Semifinals.

The loss saw the Rams come up one game short of their record from last season, ending the 2019 campaign with an 8-3 mark, going undefeated (5-0) in conference.

Offensively, the Rams faced arguably the toughest team in the northern California conference – a San Mateo team whose slimmest margin of victory all season was 12 in a midseason 24-12 win over Santa Rosa Junior College.

The Bulldogs lived up to their rank, shutting out sophomore quarterback Jonah Johnson and the Rams’ offense.

“We just couldn’t get anything going on offense,” head coach Tony Caviglia said following the game. “A lot of it has to do with their defense; it’s the best defense in the state.”

The Rams suffered a 17-3 loss at home to the Bulldogs earlier this season on Sept. 28.

Johnson was under pressure all afternoon from an aggressive Bulldogs’ defense who found their way to the quarterback for a sack four times for a net loss of 15 yards. Johnson ended the day 13 for 28 passing with 130 yards and one interception.

Sophomore running back Rico Rosario was one of the few bright spots on the Rams’ offense, gaining 86 yards on the ground in the loss.

Sophomore defensive back Xavier Alexander had the lone interception for the Rams early in the second quarter.

“Our defense played good, just not quite good enough to get the win and offensively we weren’t able to put up any points,” Caviglia said.

Defensively, the Rams played a strong game, limiting the Bulldogs to only three touchdowns throughout. San Mateo native freshman quarterback Luke Bottari threw for 207 yards. He had two touchdown passes and one interception.

Following a late first quarter touchdown run from the Bulldogs, Johnson opened the second quarter with a 33-yard run, reflecting on the Rams attempts to change up their offensive scheme from the original meeting between the two teams. Johnson ended the game with 61 yard rushing in addition to his passing numbers.

“We wanted to take advantage of their aggressiveness,” Caviglia said of the different offensive appearance of the Rams, who ran several option/run plays early in the game with moderate success.

The game remained close until midway through the third quarter when the Bulldogs extended the lead to 14-0 on a Bottari pass to sophomore wide receiver Connell Ryans.

Bottari would go on to complete his second touchdown pass of the game on the first play of the fourth quarter; a 9 yard pass to freshman wide receiver Mason Starling, who fought through two Rams’ defenders to come down with the pass in the middle of the endzone.

Defensively, the Rams season ended the same way it began – with hard nosed play and a lights out secondary. The 21 points given up by the Rams was only the second most points given up all year, with the Rams only giving up three more points in their 26-24 win over Modesto Junior College.

San Mateo will face Modesto in the conference championship this Saturday in San Mateo.

With the Rams’ season coming to a close, fans and coaches alike can definitely reflect on this season overall as a success, as Fresno City was able to hold San Mateo to their second lowest scoring output of the season, only bested by the Rams’ own first performance in their 17-3 loss to the Bulldogs earlier in the season.

“Fresno City College has played good defense for many years,” Caviglia said. “We had a lot of good sophomores on the team and they brought great leadership, and our defensive staff did a great job coaching them.”