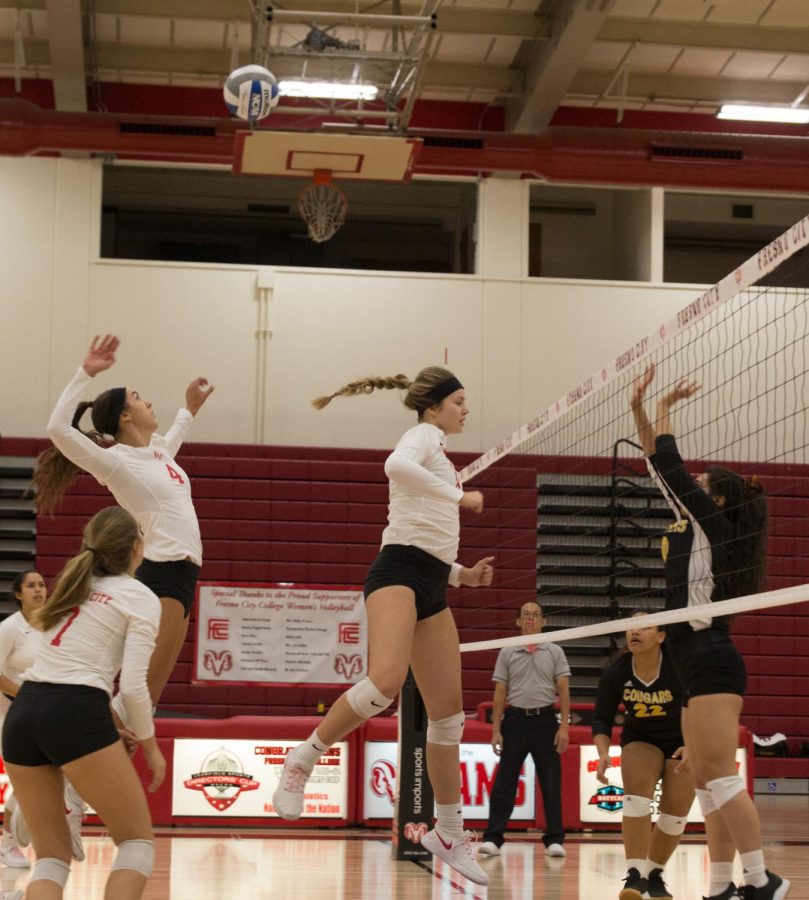 Sophomore pin hitter Julie Castleman (#4) goes up for the kill during the Rams' 3-0 set sweep over the Taft College Cougars on Friday, Oct. 18, 2019.

Fresno City College volleyball swept their way past Taft College on Friday, Oct. 18, improving to 21-2 overall, and remaining undefeated in conference at 9-0.

“I keep track more of our losses than the wins to be honest,” head coach Kieran Roblee said following the victory. “It’s representative of a tradition that started long before I got here.”

The Rams came out strong, taking the first set 25-12. Sophomore pin hitter Marina Gonzalez led the team with 13 kills in a match that saw its fair share of long volleys between the two squads, with FCC digging deep both defensively and offensively to maintain their margin.

That balanced attack is what makes the Rams such a dangerous team not only in conference play but in vying for a return to the state finals where their season ended last semester as runner-up to eventual state champs American River College.

“If we’re coming at all different angles with our attack then there’s a lot of good finishes that are gonna happen for us,” said Roblee.

In what ended up being a very balanced match in its entirety, Freshman defensive specialist Ali Santoyo led the team with 21 digs, while freshman pin setter Julia Pagani led the team in serve attempts with 26.

“We had a really strong recruiting class,” Roblee said of her freshman contributors. “It was a very skilled group in the valley coming in. [I’m] very excited about them, they’re contributing tremendously.”

Ten of the active 17 players on the Rams’ roster are freshmen, with nine of the ten players seeing action on the floor at some point during the match.

Rams’ fans held their breath early in the contest however, when freshman mid-blocker Chloe Duke went down in the first set with back spasms. She would not return, but did remain on the bench following a visit to the trainer’s table.

The Rams continue conference play on Wednesday Oct. 23 in Merced against the Pirates.

Roblee and the Rams will put their undefeated conference mark on the line against a Pirates team that is 9-4 (6-3 conf.) and currently rides a three match winning streak.

FCC’s next home match is on Friday, Oct. 25 at 6 p.m. against West Hills Lemoore.