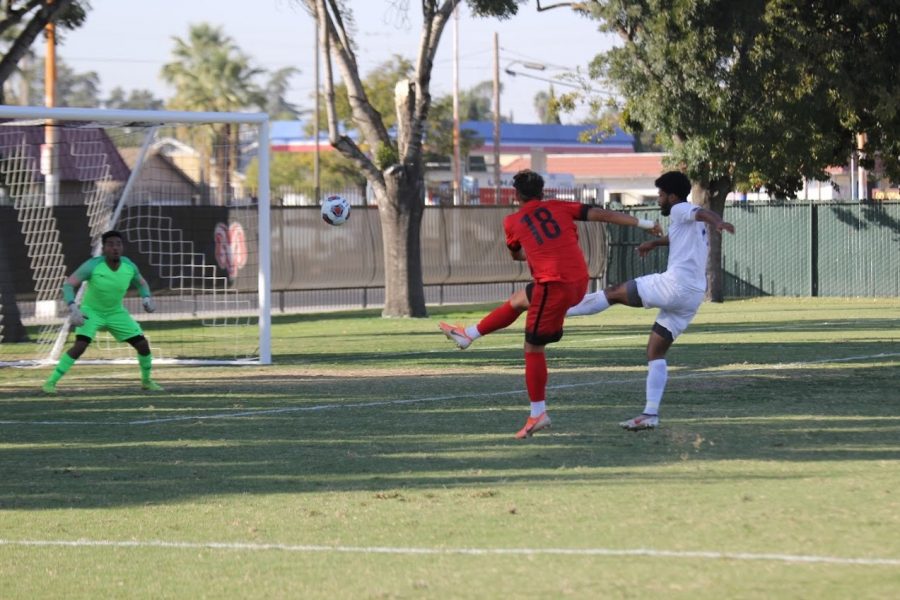 Freshman midfielder Sebastian Caballero fires one towards the net during the Rams' narrow 3-2 win over the Modesto Junior College Pirates on Oct. 15, 2019. The win marked the Rams' seventh straight victory.

It was a tale of two games for the Rams, with both solid and sloppy performances.

The Rams entered the match riding a six game winning streak in which they outscored their opponents 17-0, with two 5-0 wins. The Rams hoped to repeat their success against the successful Modesto Pirates (7-4-1).

At 18:00, freshman midfielder Melvin Benitez assisted sophomore forward Mason Gonzalez for the first goal of the match, putting FCC up 1-0. The Rams had gained an early high ground and started playing with quiet poise compared to the vocal Modesto squad.

FCC started to pull away from the opposition when freshman midfielder Josh Zambrano started setting up his teammates at the end of the first half.

At 42:00, Zambrano assisted freshman midfielder Sebastian Caballero for the Rams’ second goal. Just two minutes later, he connected with freshman midfielder Gerardo Mora, who took advantage of a recovering defense and scored the third goal of the game.

“As much as the first half was played to 3-0, it was really the last five minutes there when the game got away from them,” said head coach Eric Solberg.

Heading into the second half, the Rams made the mistake of getting comfortable with their lead, something Solberg had tried to prevent by substituting players.

“When you’re up 3-0 at the half, you try to tell your guys the game’s not over,” said Solberg. “Maybe I changed some guys out too early and lost our rhythm a little bit. I think we just lost our flow with some of the substitutions.”

Modesto took advantage and struck back with a goal of their own at 64:00. The Pirates’ offense orchestrated their first goal of the game by playing the ball in the back of the box, drawing the Rams’ defense in and allowing for an easy finish from behind. The goal was just the second FCC allowed this season, and it wouldn’t be the last.

At 83:00, the Pirates continued their climb back into the game with another goal, this time scored by freshman forward Bryan Millan.

“The second goal was bad because we were fully aware of [Millan] and what he could do,” said Solberg.

“He just split our center backs and simply put the ball over the top, which you just can’t let happen at that point of the game,” he said.

The Rams were just able to pull away with the win and add to their streak. However, Solberg says the team’s run of success isn’t the focus from one day to the next.

“I just worry about keeping that one column with the zero in it. You just want to keep yourself out of the loss column,” said Solberg.

A tightened defense will be in focus for FCC before they take on San Joaquin Delta College on Friday, Oct. 18.

Viewers can expect to see more playing time for team captain Eduardo Segura, who’s been working back from an irritated tendon in his dominant foot.

Segura’s progression will be key to the Rams’ performance when they return home on Friday, Oct. 25 to take on Folsom Lake College (8-1-5).