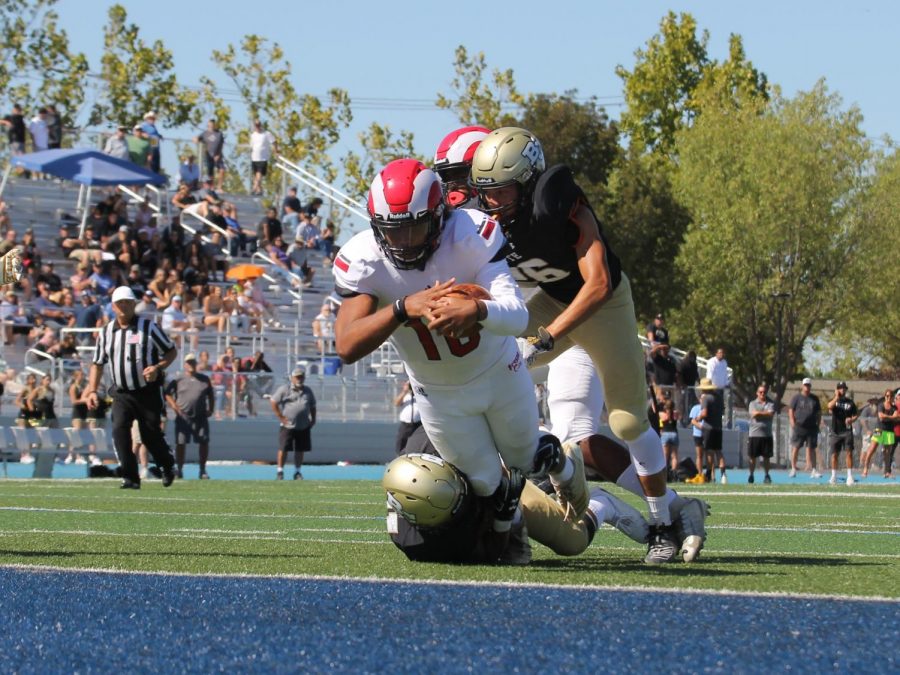 Sophomore quarterback Jonah Johnson dives into the end zone during the Rams thrilling 13-10 win over the Butte College Roadrunners on Sept. 21, 2019.

“It’s tough to come up here and play.”

Those were the words of Rams’ football head coach Tony Caviglia after a thrilling 13-10 win over Butte College on Saturday, Sept. 21.

Just over a year ago, the Rams ended the season of the Butte College Roadrunners in a thrilling 29-26 quarterfinal defeat in Redding, knocking them out of the CCCAA playoffs, and paving the way for the Rams to make a push in the semifinals against Laney College.

This year’s regular season contest with the Roadrunners may well have ended even more exciting than their postseason matchup.

The Rams defeated Butte college 13-10 on Saturday, Sept. 21 in a low scoring game which saw momentum swings, confused fans and adversity on both sidelines.

“To be able to come out with a win against that team and playing like we played, it just speaks volumes about this team’s ability to fight through adversity,” Caviglia said. “We’ve got a lot of grit and we don’t quit.”

Both teams fought hard defensive battles early with back-to-back punts on each team’s opening possessions. But the Rams were the first to make a big statement late in the first quarter, forcing a turnover on downs as the Roadrunners went for it on fourth and six from well within field goal range – a decision that may well have changed the course of the game just two hours later.

In one of the only drives for either team that seemed to go off without a hitch, the Rams came out and marched down the field on six plays, encompassing 71 yards and finishing with a 13-yard rush from freshman running back Marcus Washington. It marked Washington’s second touchdown on the season. The extra point attempt by freshman kicker Jack Cooper however did not go through, leaving the score at 6-0 Rams.

Defense reared it’s head again on the very next drive as Roadrunners’ freshman backup quarterback Brian Harper was intercepted by freshman defensive back Chad Brown on his only pass attempt of the day. Brown leads the Rams defensively with three interceptions on the season.

The Roadrunners however claimed the second score of the game – a field goal with time expiring in the first half, making the score 6-3 in favor of the Rams.

The Rams came out of halftime with a bang, as Johnson scored on a 10-yard scramble which was set up by a 62-yard completion to freshman wide receiver JJ Espinoza. The pass was the longest completion of the season so far for the Rams.

The score would remain 13-3 in favor of the Rams for the entire third quarter, as both teams battled in a back and forth defensive struggle.

The Rams were on the march down the field at the end of the third and entering the fourth when Johnson’s pass was intercepted deep in Roadrunner territory.

After a delay of game penalty pushed them back to their own 15-yard line, the Roadrunners marched down the field in hurry-up fashion, and were able to break into the endzone for the first time on a 7-yard run by sophomore Avery McCuaig, bringing the score to 13-10 following the PAT.

The next drive saw the Rams moving the ball effectively until Johnson’s second interception fell into the hands of Butte sophomore Cliff Jackson. Ever the competitor however, Johnson chased Jackson all the way to the Rams’ 29 yard line and made the tackle himself. Nonetheless, the Roadrunners possessed the ball, and the momentum.

With excellent field position, the Rams’ defense held, forcing a field goal attempt. The field goal was blocked on a spectacular play by Rams’ sophomore D-lineman Jay Kavika, holding the score at 13-10.

“We practice our kicking game every day,” Caviglia said following the game. “We had to make a play in that situation and we did that.”

Following a Rams’ turnover on downs in Butte territory, the Roadrunners got into their two-minute offense, marching the ball down the field to the 1-yard line. As Butte fans watched the time tick down to two seconds, they looked to the scoreboard and expected their Roadrunners to use their third and final timeout.

Little did they know, the third timeout had already been called, as the Roadrunners were forced to use a timeout late in the third quarter. The scoreboard operator credited the timeout to the Rams, who still possessed all three.

Butte was out of time and out of yards, just one yard shy of paydirt, leaving fans confused, Rams’ players ecstatic, and coaches with a full list of things to improve on in practice.

“It was a good win. We all grinded it out,” sophomore running back Obrien Selby said following the game. “We knew we’d face some adversity coming up here.” Selby finished the game with 34 yards on the ground, trailing only Johnson who had 41.

Now 3-0 on the young season, the Rams will look to get some retribution against San Mateo who they fell to last season 31-3.

“Got them at home [this season] and we just have to take care of ourselves, take care of business and get ready to strap it up again.”

The Rams next home game will be this Saturday against the San Mateo Bulldogs. Kickoff is at 6 p.m. at Ratcliffe Stadium.