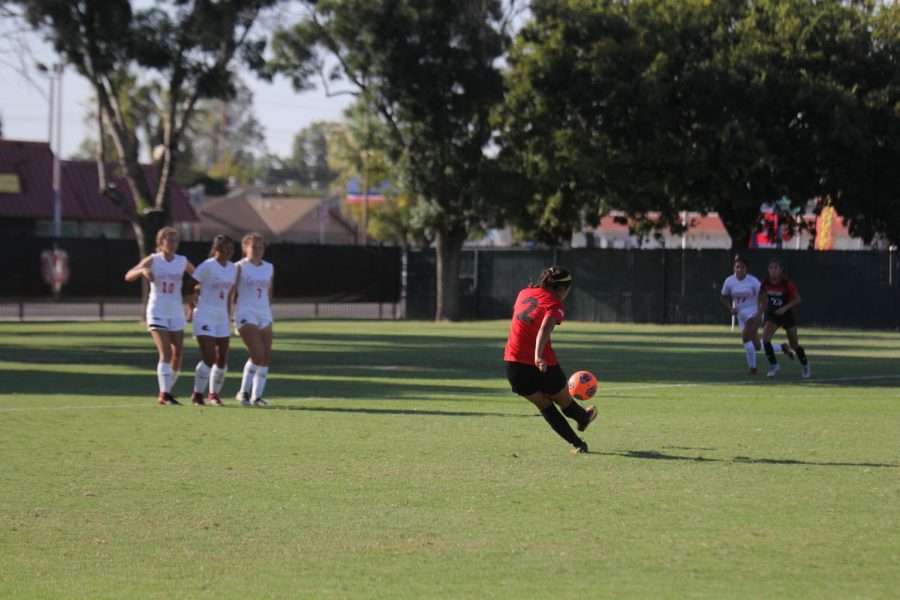 Freshman forward Itzel Rodriguez scores on a free kick in the 55th minute during the Rams' Aug. 23, 2019 match against Las Positas. The Rams came away with a 1-0 win in their first matchup of the season.

The Fresno City College women’s soccer team opened their season with a 1-0 win on Friday, Aug. 23, 2019 against Las Positas.

Battling the heat as well as the opposing team, the Rams came out appearing sluggish in the first half, keeping the ball on the opposition’s side of the field, but lacking that extra drive needed to push through to get the opening score.

Head coach Oliver Germond credited the slow start to the game to the team figuring things out in their first matchup of the season.

“Credit to the girls. They did a good job. We [coaches] just gave them a couple pointers for the second half and just being more aggressive; looking for passing lanes and blowing out players,” Germond said comparing his teams’ first and second half performances.

Germond had high praise for his teams’ work ethic in battling not only the opposition, but the heat as well.

“We’ve been out here since July 8, so we’ve been training all of July,” said Germond. “All of July we were training in the morning, so it wasn’t as bad, but for the last two weeks we’ve been out in this weather and just getting used to it.”

Part of the goal in keeping the team fresh relies on substitutions early and often.

The lone goal of the game came on a penalty kick in the 55th minute. Freshman forward Itzel Rodriguez scored unassisted in the top right corner of the goal, just clearing the outstretched arms of Las Positas’ goalkeeper Maleni Morales, giving the Rams their one and only goal needed to claim victory.

The Rams came out in the second half showing much more pressure, keeping the ball on the opponents’ side.

“Our goal is to defend the midstripe rather than our goal,” Germond continued. “We figure if we can keep the ball on the other team’s half as much as we can our odds of scoring goes up and then the odds of them scoring goes down.”

The remaining minutes of the game showed extreme bouts of pressure from the Rams on the scoring side, but very good goalkeeping by the Las Positas’ goalkeeper, saving nine goals in the second half alone, the only goal being allowed coming off of Rodriguez’s penalty kick.

The Rams hope to continue their winning ways when they match up with Citrus College in the New Balance Community College Showcase on Friday, Aug. 30.

The Rams next home match will be at 5:00 p.m. on Tuesday, Sept. 10 against the Bakersfield College Renegades. FCC came away victorious in their previous meeting last season, defeating the Renegades 3-0 in Bakersfield.