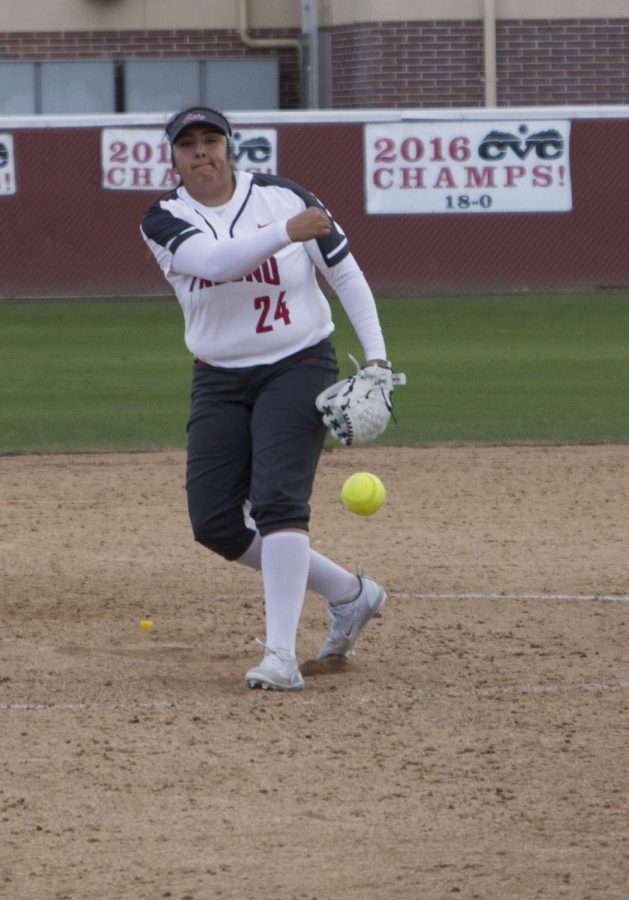 The Fresno City College Softball Team weren’t able to make it on the scoreboard in a game halted after five innings in their game against the San Joaquin Delta Mustangs, Saturday, Feb. 9, 2019 at the FCC softball field.

After starting for the Rams’ tough 4-0 loss to the Ohlone Renegades earlier in the day, freshman pitcher Katie Delgadillo was once the starting pitcher for the Rams in game two, and struggled early, giving way to freshman pitcher Emily Puente, who pitched for most of the remainder of the game.

The Rams did not lack hustle at bat, striking out only once, but were unable to score, and rarely reached base, collecting only four hits and failing to draw a walk.

Overall, the Mustangs’ Nauta pitched mainly for contact into a tough defense which ultimately led to their win.

“I felt like our offense didn’t do as well as we would have hoped it could have,” sophomore outfielder Daci Tovar said following the game. “I feel like our defense was there and we were coming out strong no matter the outcome of the game.”

This game won’t shake the Rams’ determination though.

“I think we have a pretty solid team that can lead us to some good outcomes in our future games. We have some pretty solid hitters and a really good defense which can help us win some games in league,” said Tovar.

Delta collected 18 hits compared to the Rams’ four. The final score was 16-0, with Delta taking the win in five innings.

Despite this minor setback, the Ram’s have intentions of making it all the way this season. “Everyday we are working hard to go and win the CBC conference and hopefully take us to state,” said Tovar.