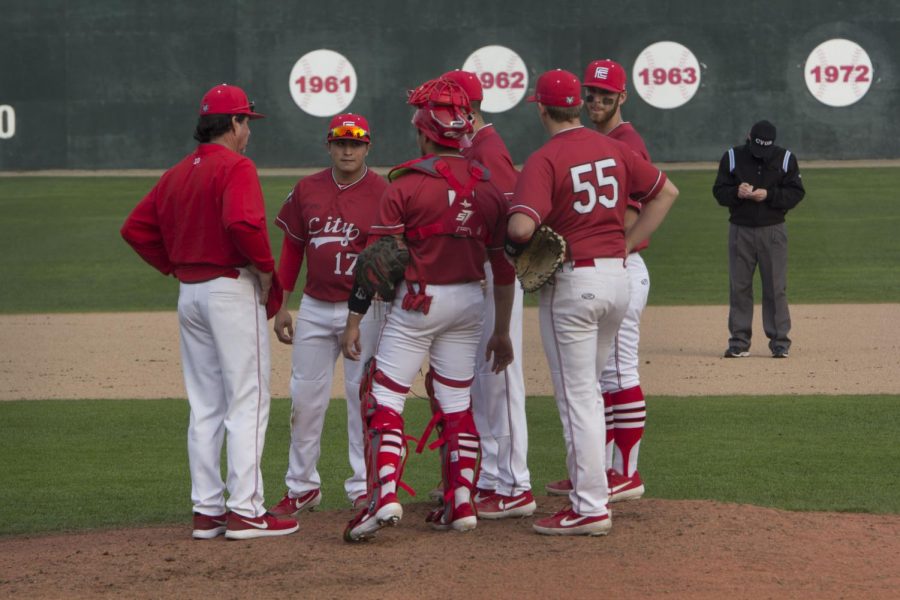 Rams baseball coach Ron Scott calls a meeting on the mound during their game against the Mission College Saints on Jan. 29 2019. Photo by Omari Bell

Down two, with two on base in the bottom of the 7th inning, Chet Allison, Second Baseman, stepped up to the plate of Tuesday’s home game against Mission College with the chance to lead his team into the extras – a hit that would not only cap a monumental come back effort, but end the Rams losing streak.

The Rams plated four runs in seven of the final nine innings of play, only coming up just short of a walk off for the win.

Allison worked a half count before slicing the third pitch of the at-bat to right field. Everyone’s eyes were on the Saints’ right fielder, Doug Neubauer as he tracked the fly ball, and reasonably so lead to Ian Ross advancing to third, and Tyler Littlefield scoring the fourth. Michael Denis wrapped up the seven inning with a strike – a game that could have lasted one more hour had it been for more time for the Rams to comeback.

“We took a tough loss unfortunately, and thought we could get more guy on base as we got more through the line up,” Allison said. “I  believe we just ran out of time at the end.”

FCC found itself in another hole and in dire need of offense. Weathering an odd early season slump, Allison didn’t let his teammates down, launching a single in the gap behind the second baseman and center field. The ball bounced just low enough for the Saints’ Richard Rios to miss. The error got Allison to first. Shortly after, Hunter Schilperoort made two errors giving Allison the chance to steal second and third.

“I usually play the pitcher to determine if i should steal or not, but it helped a little bit that they switched their pitchers early because pitcher like to come in and try to throw everything they have at a fast pace – giving me the opportunity to take advantage of that,” Allison said.

Head Coach Ron Scott mentioned that the team has been working really hard to compete against every team on their schedule, but the goals for this season versus last season is to play as a team,  win games, and believe in ourselves.

“We like our team a lot. We think it has a little bit of everything from veterans, to freshman, pitching and good defense, and it is just a work in progress,” Coach Scott said. “We believe that we will end up real positive this season.”

The Rams will be hosting Los Medanos this Friday, Feb. 1 at Euless Park at 6 p.m.