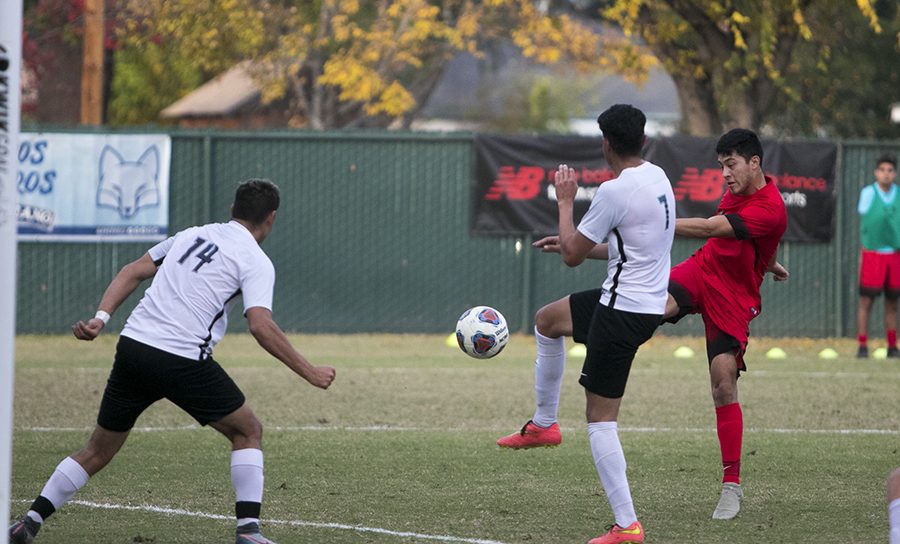 Chris Amaro scores a goal against Lake Tahoe in the Nor Cal Finals at Frsno City College Soccer Field on Tuesday, Nov. 27, 2018. Photo by Larry Valenzuela

The defending state champion Fresno City College Rams will be returning to Ventura once again to defend their crown as they advance to the final four for the third straight year in the Nov. 27 matchup against No. Lake Tahoe in the NorCal finals.

After a thrilling overtime win against De Anza on Saturday, Nov. 24, the Rams men’s soccer team was once again in a dog fight against Lake Tahoe. And once again they were saved by the foot of Chris Amaro leading them to another 1-0 victory.

Amaro scored the game winning goal in the 110’ minutes of the Rams first round matchup and the magic seemed to carry over as he connected on a goal in the 66’ minute of their second round matchup.

For most of the game Lake Tahoe was on the offensive looking to sneak in anything past a good defensive effort from the Rams, but the constant pressure from Lake Tahoe gave them the confidence to continue taking shots.

Coming back from the half it was still knotted up 0-0 the Rams began to work on their overall execution on offense and needed to push the ball forward in order to get more shots on goal.

They were able to correct what they lacked on the offensive side of the ball, coming out more aggressive in the second half. More shots opened up with attempts from both Matheus Araujo and Deqwan Sykes early on.

After Amaros go ahead goal in the second half the Rams tightened up their defense in order to make sure that they had a seat at the table in Ventura on Nov. 30 and Dec. 2.

The Rams look to make it back to back state championships but will accompanied by opponents in the form of Cerritos College (20-1-2) , City College of San Francisco (14-4-4)  and Golden West College (13-5-5).