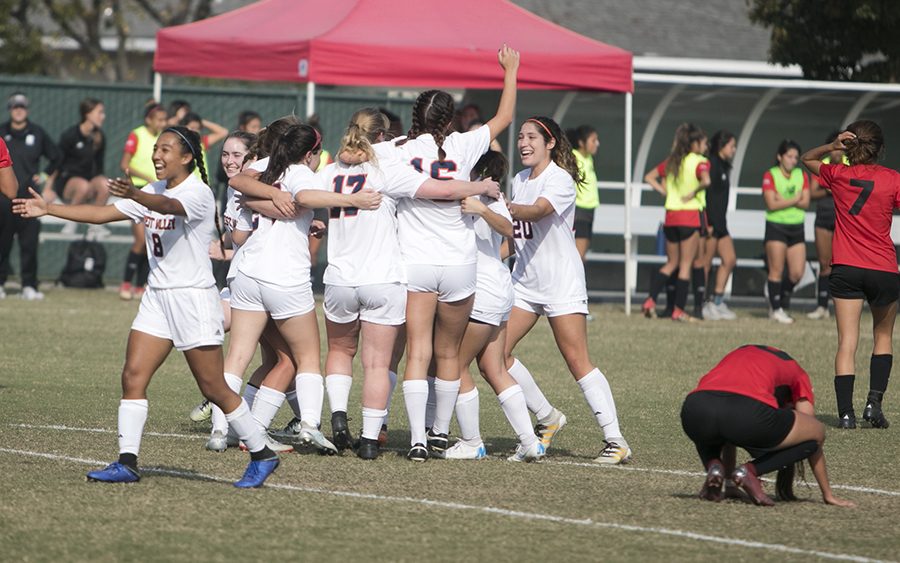 West Valley celebrates a win over Fresno City College in the Nor Cal Regionals on Saturday Nov. 17, 2018. Photo by Larry Valenzuela

A game that started with a 30 minute delay due to poor air quality left the Rams stunned after a 1-0 loss to the 13th seeded Vikings of West Valley College this past Saturday, Nov. 13th.

The fourth seeded Rams of Fresno City College came out with intensity, but a goal coming in the 4th minute by WVC would put the Rams on their heels early on.

The Vikings would score from a fast break counter attack that didn’t look threatening to begin with, but would lead to a ball in the back of FCC’s net, and more importantly a 1-0 deficit that they would not overcome.

The scoreboard didn’t tell the whole story for the Rams as they had many opportunities to tie the game up throughout the remaining 86 minutes.

FCC would have 10 shots on goal through both halves along with five corner kicks in which they didn’t convert. The game looked to be dominated by the relentless offensive attacks coming from the Rams but multiple clearances and a few good saves by Vikings goalkeeper Samantha Coelho would hold them at bay.

The game would come all the way down to the wire as FCC would get a corner kick with just a minute of extra time awarded by the referee.

The Rams would send everyone in, including goalkeeper Ruby Campa, to give themselves a chance to put a head on the ball but the opportunity would come out to nothing as the ball went wide of the left goal post.

“I thought we created a lot of chances in the first half,” Coach Oliver Germond said after the game. “Soccer is tough when it comes to scoring and today just wasn’t our day.”

The defending state champion Rams had made an impressive run after losing 16 players from the previous season and having to rebuild from the ground up. Germond will face the same challenge going into next season as 13 sophomores were rostered on this years team.

The Rams who came in as the fourth seed in the NorCal Regionals ended the season with an overall record of 17-3-3. West Valley College (13-4-5)  head to Tahoe College on Tuesday Nov. 20 as they take on the fifth seed Coyotes