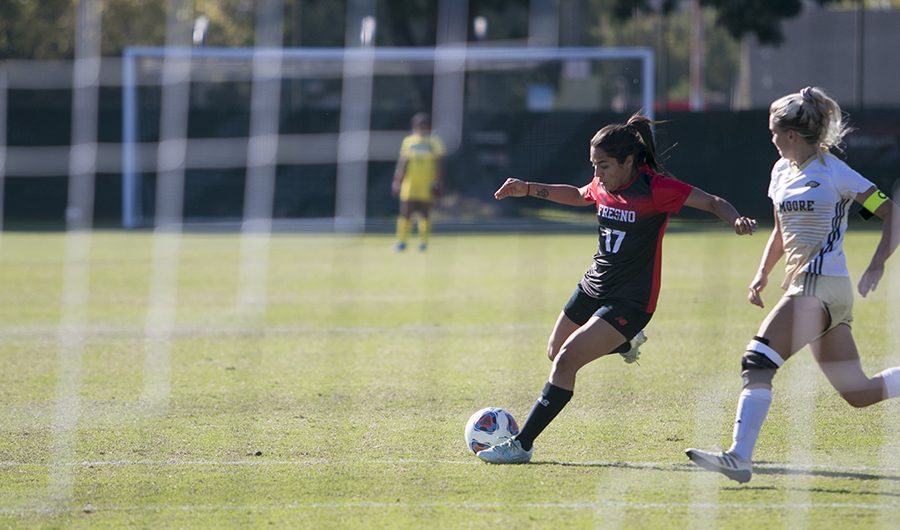 Jasmin Aguirre winds up for a kick towards a goal against Lemoore college at the Fresno City College soccer field on Tuesday, Oct. 16, 2018. photo by Larry Valenzuela

The past week has once again served the Fresno City College women’s soccer team completed the week of Oct. 16-23 with two decisive wins over both West-Hills Lemoore 7-0 and Reedley College 5-0.

While on the road against Reedley College on Friday Oct. 19  the Ram’s were led to the 13th win of the season lead by scores from five different Rams players, including decisive goals in the 61’ and 84’ minutes by freshmans Mia Lopes (2) and Anai Rosas (1).

Earlier in the week the Rams had yet another had yet another blowout win at home against West-Hills Lemoore on Tuesday, Oct 16 as they walked away with a 7-0 victory, making them 6-0 in conference play and 12-1-3 overall.

FCC did a great job at coming out aggressive at the start of the game, but the Golden Eagles of West Hills were able to contain the relentless attacks of the home side. The Rams had a difficult time converting on their chances early on in the first half with several missed shots over the crossbar.

“I think we put a little too much pressure on ourselves,” coach Oliver Germond said when asked why he thinks his offense struggles early on in games. “We get a little too anxious and get away from playing our game.”

FCC did eventually come back down to earth as they were able to get goals from Taylor Alkire (13) in the 30 minute, and Brianna Figueroa (2) to put West Hills on their heels heading into the half.

From then on it was a highlight reel for the Rams as it seemed they had the West Hills’ defense figured out for the rest of the game. Goals came quick and in bunches as FCC put up five more goals in the span of a little over 31 minutes, including a hat trick from Jasmine Aguirre (5).

The Rams’ passing game looked stronger as the game continued on as they were able to pick up a two-assist game from sophomore forward Nia Valero and sophomore midfielder Madison Fisher.

To go along with a strong outing from the offensive side of the ball, the Rams, who are 2nd in the state in goals allowed (3), had another shutdown defensive day as they pick up their 11th shutout of the year.

FCC, who have now won five straight and eight of their last ten, look to stay hot as they have just six games left before their inevitable playoff campaign begins.

“We just talk about keep getting better,” Germond said when asked about preparation for playoffs.

FCC is coming off of a state championship from the 2017 season and is looking like they are ready to make another run at the title as they finish up the remaining six games of the regular season.

“We want to be at our best in November when playoffs start, and we want to take care of Conference and go undefeated.”