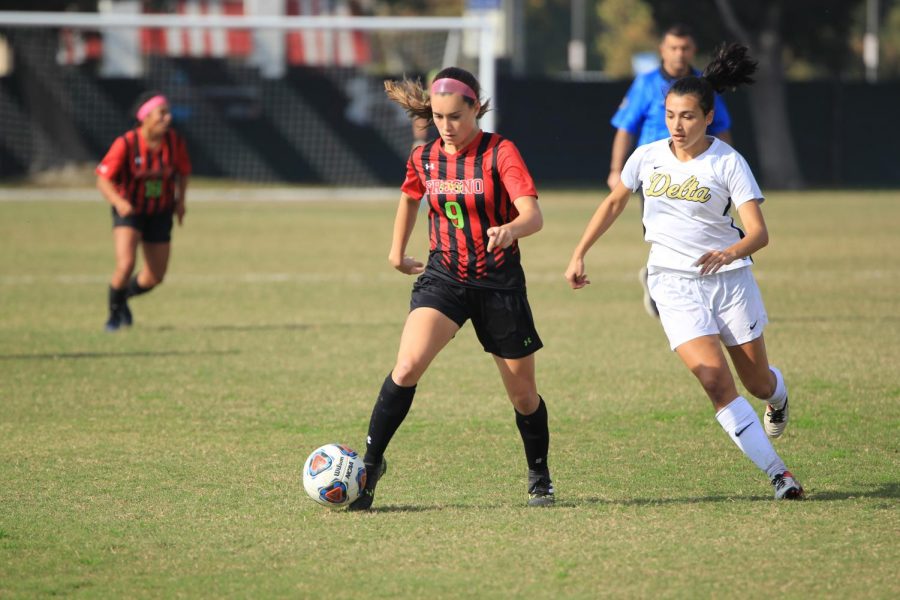 With an unusual game time of 11 a.m., the game began with both teams getting to the opposite side with dangerous plays, but with no luck. After the initial 10 minutes with no control from either side, the Rams began to keep the ball and started making more accurate passes.

The Rams had control of the game, but San Joaquin Delta kept the game competitive with an exceptional counter attack that kept the Rams’ defense on their toes.

It wasn’t until the 25th minute of game time when FCC defender Cassie Sandoval managed to take a strike from outside the box that got through the keeper’s hands, giving the Rams the first goal of the game.

After taking the lead, the FCC managed to also take full control of the game with San Joaquin Delta having sporadic counter attacks that the Rams’ defense kept under control. The Rams took the lead into halftime where coach Oliver Germond gave them instructions on keeping up the attacks and making sure they don’t take any momentum from their lead.

The second half of the game started much like the first minutes of the game with both teams battling for possession of the ball at midfield. San Joaquin Delta managed to get a few more shots on goal, but with FCC’s keeper Riana Castaneda always managing to keep the ball or just missing the target altogether.

For the rest of the half, FCC kept pressing the San Joaquin Delta defense with well-organized attacks.

In the 87th minute of the game, FCC’s midfielder Jasmin Aguirre took a corner kick that managed to get past San Joaquin Delta’s keeper who was being pressured by the Ram’s forward Riana Wristen inside the penalty box. This gave FCC the second score of the game and assured them the win with less than five minutes left of playing time.

With final score of 2-0, the Rams move on to the state championship final four and will face Santiago Canyon College on Dec. 1.

“We battled well today that team was very good, we kept our composure and did amazing. I am happy with our kids,” Germond said. “We didn’t play our best today, but we still found a way to win. We’re excited for the next games.”