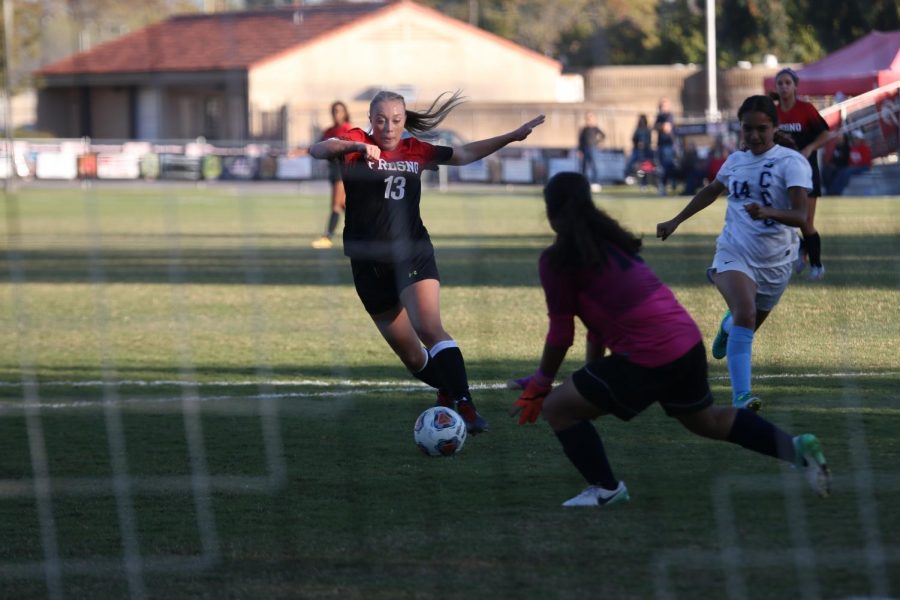 In the final regular season poll of the year by the National United Soccer Coaches, the Fresno City College women’s soccer team moved up one spot is are now the number one team in the nation after handing Cerro Coso a 5-0 defeat on Nov. 7 and giving the Rams a perfect home record of 10-0.

“We started all our sophomores today, and I thought they did a good job as a unit,” said head coach Oliver Germond. “We’ve gone 20 games undefeated, and that’s special.

Just a few minutes later, the second score of the game came from center Jasmine Garibay who was assisted by defender Cassie Sandoval. The Rams took the lead and never gave it back, because three minutes later forward Tori Coles scored the third goal of the match assisted by Garibay.

The last goal of the first half was scored by forward Anissa Wilson who was assisted by Bracamontes.

The entire first half of the game was dominated by the Rams whose defense only allowed Cerro Coso to get a scoring opportunity once in the first 45 minutes of the game.

During the game’s halftime, there was a special acknowledgement of 12 outgoing sophomores who were playing their last regular season home game at FCC. The players received flowers and a special collage of photos from their family and friends who were in attendance. While they were getting their flowers and pictures, there was an interview of each player recounting their best times at FCC playing in the background.

Once all the festivities were done, the second half was ready to start.

FCC continued dominating the game much like they did in the first half, with lots of offensive plays and a very solid defense.

The fifth and final goal of the match came when right wing Marisa Gularte got one past the goalkeeper, thanks to an assist from center Mariana Ocegueda. This made the final score 5-0, giving FCC the win.

With the win, FCC has now clinched at least a share of the Central Valley Conference title and they will finish the season undefeated at home with an outstanding 10-0. The Rams will be looking to take the CVC title outright and finish the regular season undefeated on Nov. 10 when they face West Hills College in Lemoore.

“One of the things I always tell my players is, don’t take this for granted,” Germond said, “because you might never be in a position to go undefeated.”