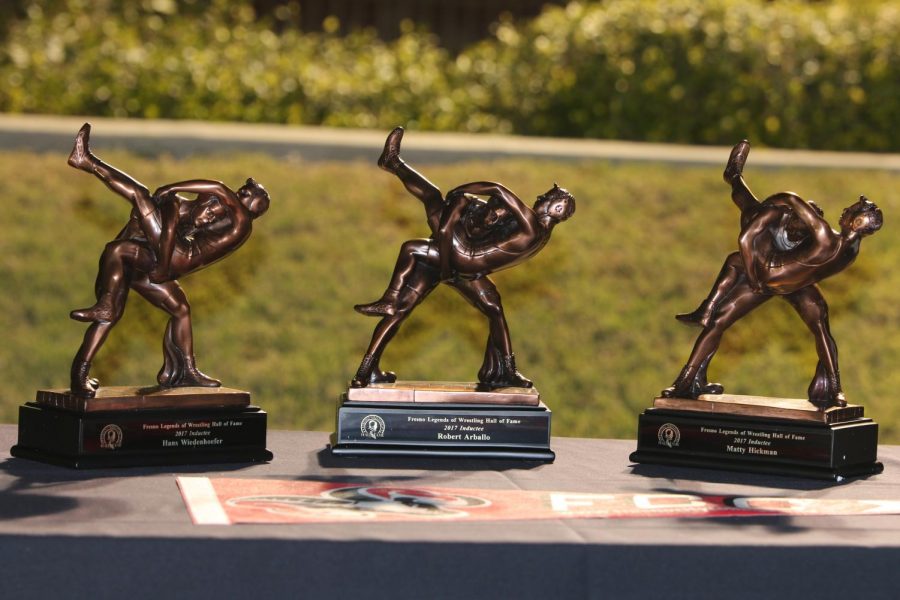 Oct. 27 was a special night for the wrestling team at Fresno City College and wrestling as a whole in the Central Valley.

This year’s inductees are some of the most decorated athletes to walk through the FCC halls with accolades, including with numerous Junior College State championships, National Coach of the Year awards and League championships.

Paul Keysaw, Rams head coach, said that honoring past wrestling legends is important to not only for those being inducted, but for present and future generations of FCC Athletes.

“I think it is great to bring different generations of Fresno City College students together,” Keysaw said.

Hans Wiedenhoefer, now deceased, was the first inductee.  Wiedenhoefer was a WWII veteran who is credited as “the Father of Central Valley Wrestling” for pioneering the sport of wrestling in local schools and at FCC.

Wiedenhoefer was not the only inductee to receive his award posthumously that night. Former FCC state champion Matt Hickman was inducted seven months after he tragically died in a car accident. During his time at FCC, Hickman was a former California Community College state wrestling champion and a member of the 2012 FCC championship team.

In attendance to receive the award on his behalf were Hickman’s parents who expressed gratitude to both coach Keysaw and FCC for what they did by helping their son reach his potential.

Hickman’s father addressed the wrestling team and challenged them to strive for their goals and work the hardest they possibly can in honor of Matt.

The third inductee, who was in attendance, was two-time state champion Robert Arballo whose humble, rural beginnings led him to wrestling greatness. While wrestling at 126 pounds, Arballo won two individual California State Community College titles in the 1970s, which led him Fresno State and onto an amazing 35-year coaching career.

After winning numerous league titles at the high school level, he embarked on a decorated coaching career at the collegiate level as an assistant coach for 17 years. He was recognized as the California Assistant Wrestling Coach of the Year on three separate occasions. Arballo has also won a state championship as head coach of FCC and in 1998 was the State Community College Coach of the Year.

Arballo spoke of his journey as a young kid in Madera County and how wrestling and FCC have made two of the biggest impacts in his life.

“It is an honor to be inducted alongside all the other past inductees,” Arballo said.

The Casino Night took place after the induction ceremony and was a scene of laughter and music. Proceeds from the event will go towards helping the wrestling program.

Many of the attendees were former FCC wrestlers, which Keysaw feels is very important.

“The goal is trying to build that connection and trying to link generations,” said Keysaw, “and give not only my wrestlers, but some of these inductees a chance to meet some of these wrestlers because they were once in their shoes.”