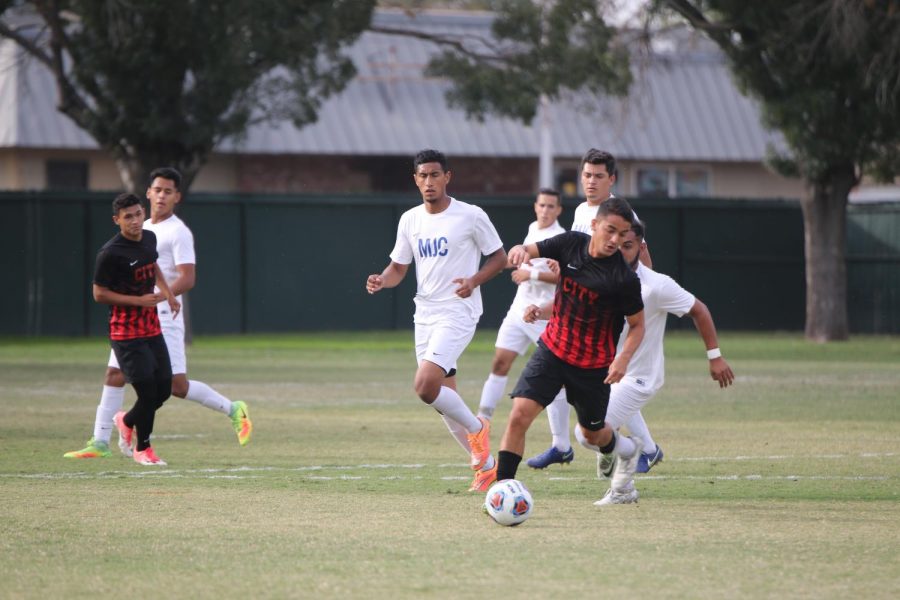 The Fresno City College men’s soccer team defeated Modesto Junior College at home 5-1 on Oct.10. This gave the Rams another win to continue with their undefeated streak and preparing them for the upcoming playoffs.

The Rams started off right, when within the first 15 minutes of the game, midfielder Juan Alvarez scored the first goal to open up the game.

Throughout the first half of the game, the Rams had control of the ball, making great drives up and down the field. Defender Matheus Araujo scored the second goal of the match, making it 2-0 in favor of the Rams.

Modesto managed to keep things interesting when they scored a goal by forward Jose Yepez, taking the score to 2-1 with Rams still in the lead.

Midway through the first half, FCC’s midfielder Omari Bell scored the team’s third goal, giving FCC the lead going into halftime with the score of 3-1.

Modesto came out in the second half with more determination and started to have more control of the ball. Although they didn’t score, their dominance of the ball improved from the first half of the game.

FCC’s goalkeeper Andres Castrajon, had a really great save when he dove and managed to slap the ball away to keep the Modesto from scoring.

The score got out of hand for Modesto when midfielder Jose Aguilera scored the fourth goal for the Rams who at this time were cruising through the game.

Just before the end of the game, forward Johnny Rodriguez scored the last goal of the match making it 5-1 in favor of FCC.

“We played sloppy defense for the first ten minutes of the first half, but other than that, I like what they’re doing,” said head coach Eric Solberg. “We’re one of the best teams in California. Our expectations are to win every game and for us to keep progressing. At the end, we have to play better than we currently have.”