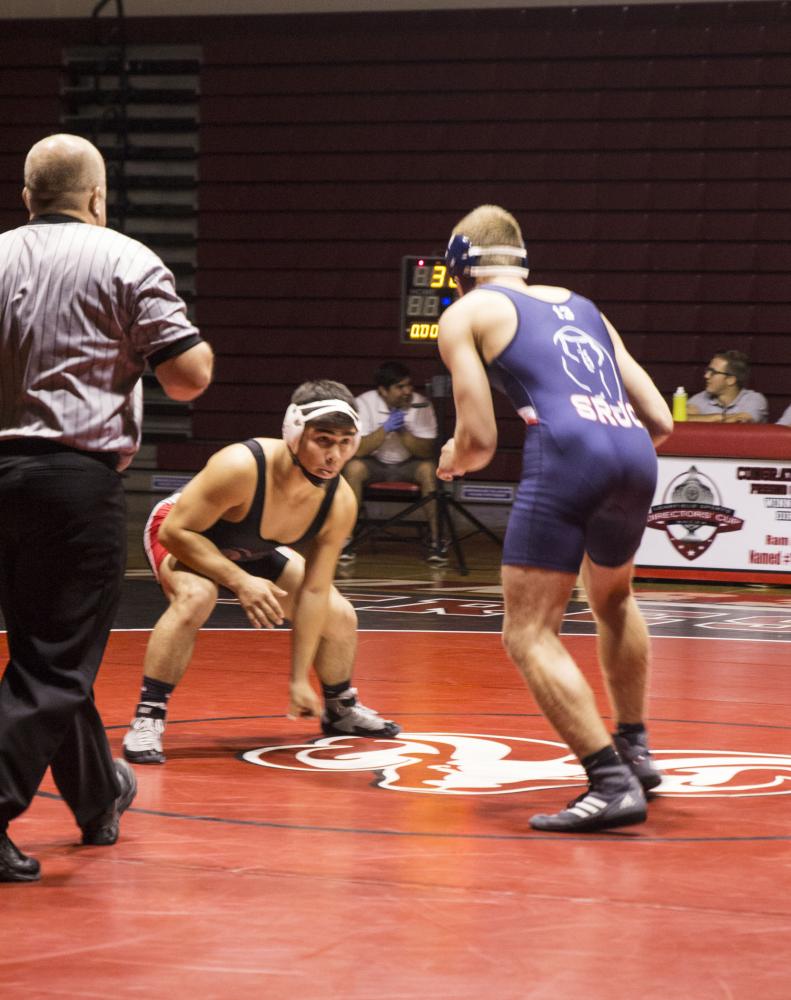 Coming off an impressive first place at the KLS Air Express Invitational tournament in Sacramento on Sept. 16, the Fresno City College wrestling team was ready to face Santa Rosa Junior College in their first conference match of the season. The Sept. 22 match was also their first home game of the season and the team didn’t disappoint the home crowd winning 42-7.

The bout began with a couple of exhibition matches: FCC’s Josh McMillon pinned his opponent in the first round to take the win and Bryant Franklin won his match by majority decision 12-3.

During the bout, FCC’s Jacob Delgado, Dylan Martinez and Bobby Miguel all received wins thanks to forfeits from Santa Rosa.

The first official match of the bout was the 125 pound weight class where FCC’s Brandon Betancourt faced Santa Rosa’s Brian Padilla. In a well-fought match Betancourt defeated Padilla via pin in the first period of the match.

The next match was at 133 pound weight class in which Isaiah Perez from FCC and Santa Rosa’s Tyler Poalillo faced each other. Isaiah got the fall over Poalillo and took the victory giving FCC a commanding lead in the bout.

Next up at 149 pound was Ryan Zaragosa from FCC facing Austin Graves in three well-fought rounds. Zaragosa won the first round 2-1, then the second round ended 5-5 making the last round very exciting to watch. Graves went ahead in the start of the second round and Zaragosa just couldn’t catch up and at the end Graves took the decision 9-5.

In the 165 pound match, the Ram’s Conrad Lopez went up against Cameron Casey from Santa Rosa. The match went all three rounds with the first round going to Casey 5-2. In the second round Casey took a commanding lead of 12-3 and by the third and last round Casey was able to shut down Lopez and not allow him to gain any more points ending the match 16-3 in favor of Casey.

For the next match at 174 pounds FCC’s Miguel Ruiz faced Ian Black from Santa Rosa. In a very competitive match that had Ruiz up 2-1 in the first, then in the second it was all tied up 2-2 and finally by the third Ruiz got the decision with a final score of 5-2.

The 197 pound match saw Jay Johnson from FCC take on Diego Lopez from Santa Rosa. The match was a quick one that only lasted one round. Johnson got the fall over Lopez in the first round.

The heavyweight match was the last one of the day and it had Casey Jones from FCC up against Karim Shakur from Santa Rosa. Jones defeated Shakur in all three rounds, finishing the match 6-1 in favor of Jones.

FCC took the team win with a score of 42-7 giving the Rams the first win of the conference at home.

“It was exciting to see Isaiah Perez, who is a freshman from Dinuba come and pin his opponent who was in the finals in the Sac city tournament last week,” said assistant coach George Moreno. “I was very pleased with the way our guys performed we had to juggle the lineup, but overall we had a pretty good performance.”