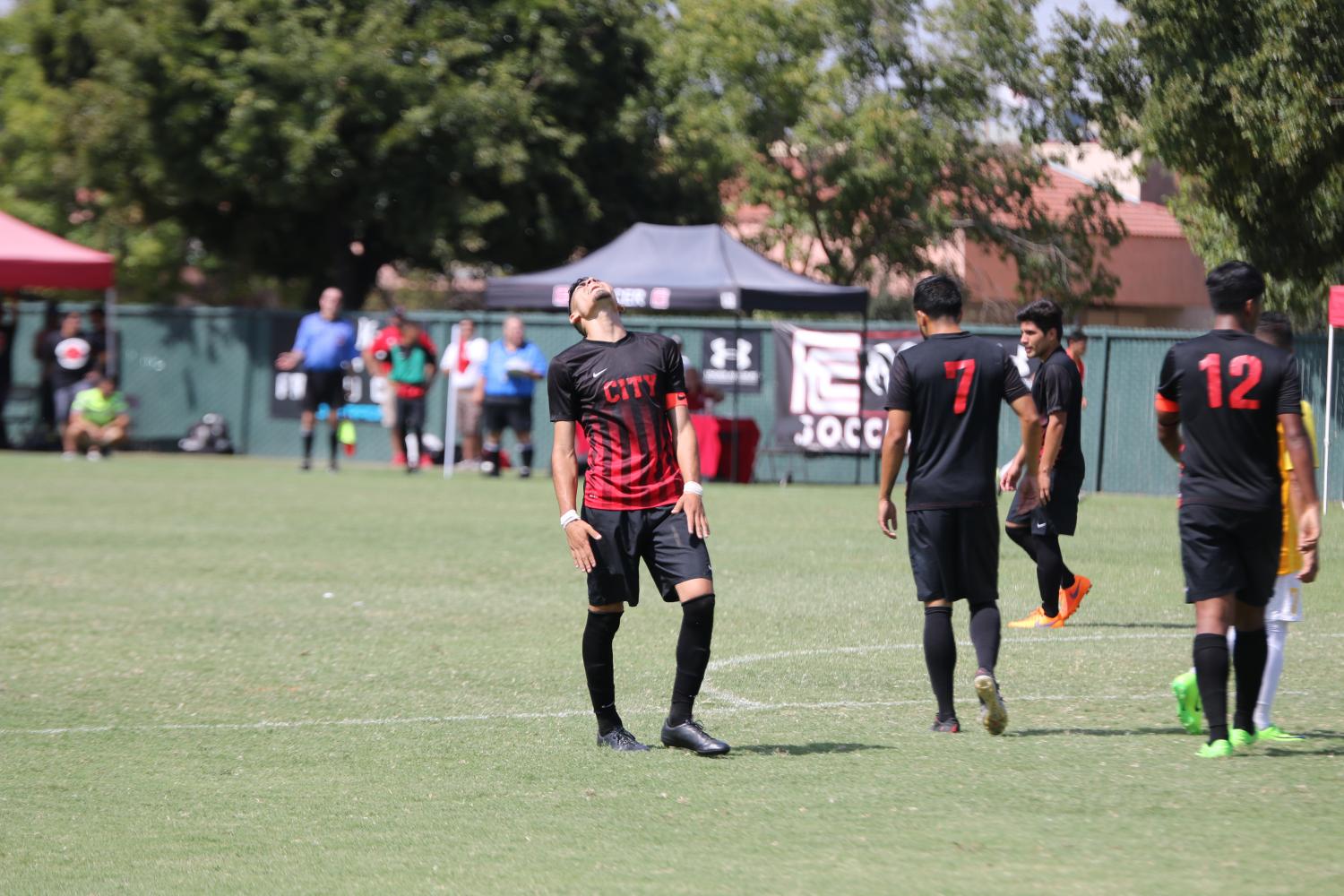 Ram's men's soccer players show their frustration after not being able to keep the lead during a tied game against Cañada College at home on Saturday, Sept. 16, 2017.

“We are going to do the same for the most part,” Solberg said. “We are also going to play fast, and other than that we are going to be ourselves.”

The game did not start out with the same consistency that was preached about before the game. Cañada came out strong with a goal earlier on in the game around the 6 minute mark to go up 1-0.

After making the necessary adjustments, the Rams defense stifled Cañada’s offense by taking command and controlling the pace of the game. The Rams made it very difficult for an offense that struck early and now was unable to cross mid-field for most of the first half.

The Rams got on the board thanks in part to the skills of leading scorer Forward Johnny Rodriguez, who was coming off a hat trick in the previous game against Contra Costa. Rodriguez made his presence known by slicing through the Cañada defense for the first score of the game.

After the shot in the arm by Rodriguez’s first score the Rams stayed on the offensive and continued the aggressive pace by bringing the fight to Cañada’s defense. This led to many scoring opportunities and a second goal from Rodriguez right before the end of the first half.

The game became chippy and physical play was on display from both teams. The referees were letting both sides play it out which led to many players taken out their frustration on each other on both sides.

At the end of the first half the Rams seemed to have all the confidence in the world, but as soon as the second half began the feeling was that FCC was playing a more conservative ball game. That is when the refs called a penalty that the crowd felt affected the outcome of the game with a couple of questionable calls going the way of Cañada  leading to a capitalization of penalty kicks.

After knotting up 2-2, both teams ramped up the intensity and towards the end of the game the Rams were able to take the lead with a crucial goal to make the score 3-2.

With the crowd roaring from a late score, the Rams just needed to defend their side of the field and they would add another W to the win column. Ultimately that would not be the case with Cañada striking in closing minutes and the game ending in a 3-3 tie.

The tie was cause for much disappointment on the sideline and on the faces of the players on both sides. Rodriguez felt more could have been and the calls not going their way ultimately the man factor for the loss

“Very disappointed,” Rodriguez said. “Could have won, should have won. Calls did not go our way and that is just how it goes.”