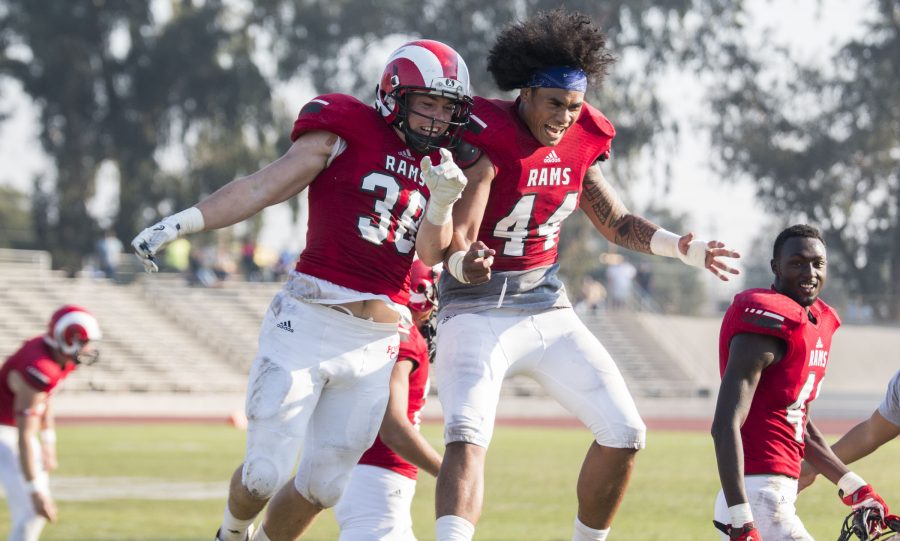 Thomas Lopez and Hugo Mendez celebrating after the Rams successfully blocked a punt against the San Joaquin Deltas at Ratcliffe Stadium on Nov. 5, 2016. The Rams won against the Deltas, 45-43. Photo/Ram Reyes

The victory was a much needed one as it came on the heels of a tough loss the previous week against Laney College, and it keeps the Rams alive for a possible postseason bowl berth.

Both teams had great performances from key members of their offenses which allowed each team to put up points and yards in droves.

That was a stark contrast to the way offense performed against Laney, as the Rams were only able to muster a meager 12 points.

Head coach Tony Caviglia said he was very happy with the way that his offense moved the ball, and was particularly happy with his freshman quarterback Andrew Zimmerman, who went 20-33 for 244 yards, with a whopping five touchdown passes.

“I thought [Zimmerman] played a tremendous game. He was putting the ball in the right spot the entire game and we were able to get some good play out of our passing game,” Caviglia said. “We were struggling with kicking and we knew we had to score touchdowns.”

Freshman wide receiver Marcus Rose was the beneficiary of one of Zimmerman’s touchdown tosses as he got into the endzone on a 30 yard strike in the second quarter that gave his team a 18-13 lead.

Rose wasn’t finished scoring as he had a crucial punt return for 72 yards and a touchdown in the fourth quarter that made it possible for Fresno to win the game with a huge momentum shift.

Rose talked about what he saw on the play.

“Coach had me scoot up a little bit because the punter wasn’t kicking that well but he ended up kicking a pretty good kick, so I had to run back and honestly didn’t know what to do,” Rose said.

“It ended up bouncing and coming into my hands, and when I started taking off I had great blocking,” he said. “Everyone was blocking and doing their job. Without them I wouldn’t have been able to score.”

He finished the game with 132 all purpose yards and two touchdowns that served as an integral part of the Rams’ attack.

The Rams offense couldn’t do it alone though, and despite giving up 43 points, it was the defense that was able to make the crucial stops to keep Delta from putting the ball in the endzone.

The defense forced a turnover on downs by SJD on the final drive of the game to seal the win in the Rams’ final home game of the season.

Rams’ sophomore linebacker Chandler Cocklin was proud of the way his defense was able to rise to the occasion at the most important moment of the game, despite how many points they allowed.

He said it all comes down to the way his team prepared.

“We started off slow. We had a lot of good film and our defense is really good,” Cocklin said.

“Everybody tries something different with us, so we had to adjust. Once we adjusted, we got going with it,”

At 4-5, the Rams now sit in the final spot for a bowl berth, but they must win in their season finale against College of the Sequoias on Nov. 12 to secure it.