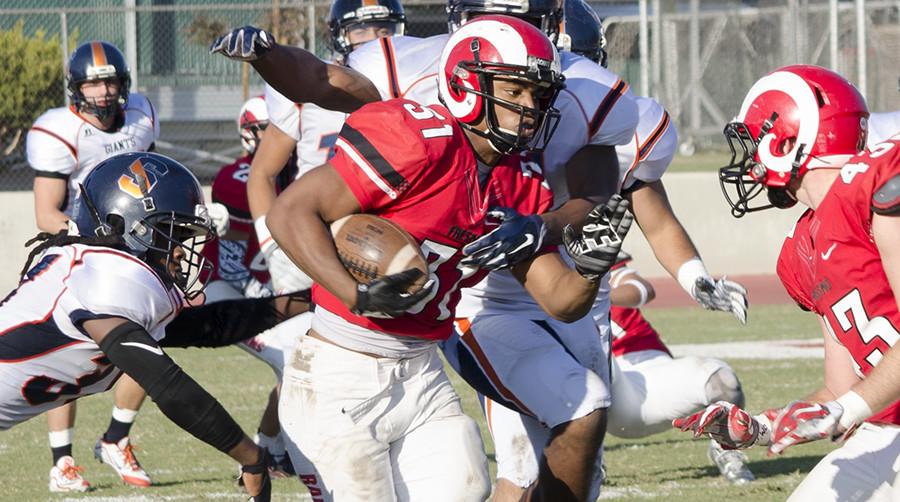 The Fresno City College football team finished its regular season on an extremely high note as the players took care of business against the fledgling College of the Sequoias Giants with a final score of 49-17 at Ratcliffe stadium on Nov. 14.

With a final record of 6-4, the win allowed the Rams to clinch a postseason berth for the 17th consecutive season under head coach Tony Caviglia.

The Rams dominated from almost the very beginning of the game, taking place on Military Appreciation Day. Defense and special teams were key to the flurry as they forced a three-and-out on the Giants which allowed freshman wide receiver, Mitch Brumfield, to put them on top with a punt return for 72-yards and a touchdown.

“Having scored 14 points early in the first quarter before the offensive even taking the field some of that takes a lot of pressure off the offense,” freshman defensive back Chandler Cocklin said.
“It helps build our confidence throughout the game.”

They weren’t done though. On the next possession, Cocklin intercepted a Brian Chester pass and returned it 54 yards for a touchdown. In the blink of an eye, the Rams were up 14-0 and the offense hadn’t even set foot onto the turf.

Caviglia and his coaching staff put an emphasis during practice on scoring points in other ways than offense, and it showed up on the field on Saturday.

“It’s great anytime that you can score without having to drive the ball down the field,” Caviglia said. “Our defense’s goal is to score.”

The head coach added, “Mitch Brumfield hadn’t had a whole lot of opportunities to return punts, but he made a tremendous run to get that score. Scoring in the kicking game and scoring on defense, that’s usually a recipe for winning.”

COS took over and were able to score on a 25-yard touchdown pass from Brian Chester to wide receiver Malik Harrison to make the score 14-7. By then though, it was too late as Fresno had already established the overwhelming momentum that would carry them through the remainder of the game.

The two teams traded scores on the next two possessions making the line 28-14 and it would be 28-17 at halftime.

After halftime, Fresno clamped down on the Giants, not allowing them to score a single point the rest of the game.

Meanwhile, the Rams offense put the pedal to the metal in the third quarter and took their next two possessions to the house, making the score 42-17 going into the fourth.

From there, Fresno’s offense slowed down a bit, and the team scored only 7 on a 3-yard touchdown rush by NCFC offensive player of the week, Nate Jones.

FCC was able to finish the game in the same sort of fashion that they began — with their defense. With 12 seconds left in the game, linebacker Jaquan Alvies and defensive lineman McCarthy Tonuao sacked Chester to put the Giants out of their misery.

To officially end their season, the Rams will face Sierra College in the State Center Bowl on Saturday, Nov. 21 at Ratcliffe stadium.

Caviglia said he was extremely proud of how his team played under the pressure of needing to win to secure a bowl berth along with showing out in front of the military present.

“I had a lot of things riding on this game,” he said. “And we had the Bill Music halftime memorial presentation. We were honoring veterans, and especially with the things that are happening in Paris.

Caviglia said he and his team had a lot of emotions going into this game. “We were playing to secure our bowl berth,” he said. “I’m just happy about how the team came out and played.”