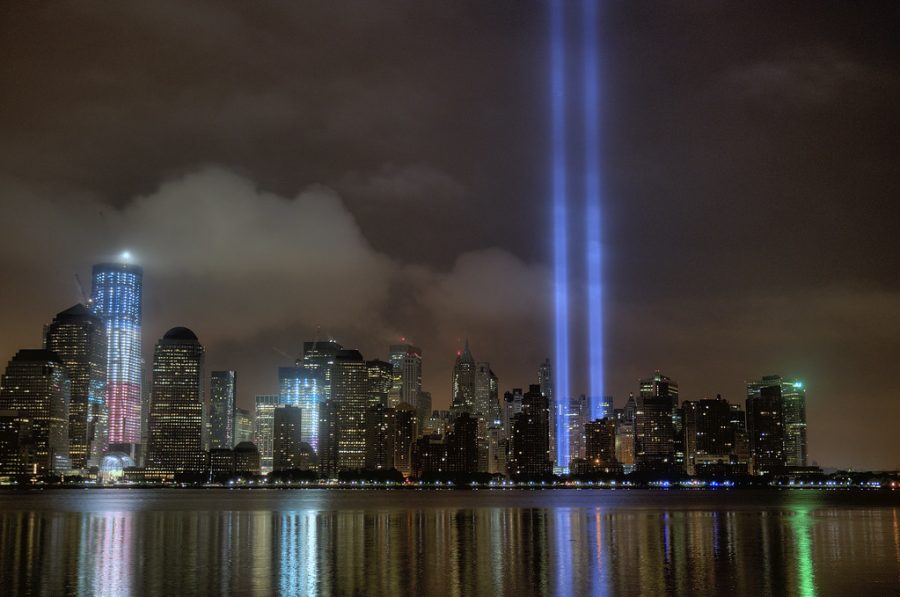 The "Tribute in Light," an art installation of 88 searchlights placed six blocks south of the World Trade Center. The twin beams of light commemorate the 9/11 attacks. For those that lived through the attacks, the lights memorialize a skyline eternally scarred. For those born after, the lights are all that ever was. Photo courtesy of Flickr.

The editorial board reflects on their memories of 9/11.
Tommy Tribble, Editor-in-Chief
I remember the television.

I was 7 years old, and I must have been in the second grade. I remember an early morning, a glowing TV set, and my surrogate grandmother, a woman named Mary. The screen displayed what I would one day know to be devastation—rolling smoke, broken glass, dead people, and a country that would never be the same.

But when I was 7, I just knew it was Bad. I knew because of Mary, who clutched at her chest and covered her mouth. She kept saying “Oh my god,” again and again.

And I knew it was bad as the footage replayed again and again that day, the footage of two towers falling down and apart. One. And then another.

I didn’t go to school that day. I don’t remember anyone explaining anything to me, and the hourly coverage of the attacks, the politics, the geopolitics, the international implications–none of it penetrated my young brain.

In the following years my teachers would read storybooks commemorating the tragedy. They were cutely drawn, like all art for children, even as they documented the most devastating terror attack in the modern era.

It reminds me of the picture books about the first Thanksgiving. It’s a comforting lie meant to render a dark, troubled history in simplistic terms that children can understand. That I could understand. But it brought no clarity.

In 2002, many thousands of miles away, the many millions of victims would see the very same dark, troubled recent history memorialized by twin beams of light. There is no text there, no legend: just an emptiness where life once was.

I imagine there are many 7-year-olds that see that light and understand it only by reputation, by the look in their parent’s eyes when they see it, every year.
Hannah Lanier, News Editor
I remember the history lessons.

I remember the memorial services hosted by my high school on the anniversary of the tragedy.

I remember the moments of silence requested over the intercom.

The great impact that this single incident had on the entirety of the future of the country–the only version of the country that I have ever known, or understood.

This day that comes with a morbid, gray cloud of sadness, oddly followed by a wave of guilt.

Guilt that comes from not being old enough to understand the intensity of the attack rather being told by my parents that they were paralyzed with fear.

Woken up in the middle of the night by a phone that appeared to never stop ringing.

Finally waking my mother up: What do you mean? You can’t be serious?

My cousin was supposed to be on that plane. Her and her new fiance were set to site see the magical place of New York City.

Was she on the flight?

It is impossible, that this is happening. She can’t be on the flight.

Although the attack happened across the country, it hit home in Fresno, California.

Hours later realizing that by the merciful act of flawed time management my cousin missed her flight. Left to stay in a city filled with chaos and grief, but safe nonetheless.

Regardless of the literal security of my family, the disaster stunned people across the country.

Leaving the people feeling insecure in their own homeland.

A country comprised of millions suddenly became one family. One family that lost thousands of its own, grieving differently for each and every one.
Ben Hensley, Sports Editor
I remember confusion.

Mom and dad watching silently in disbelief. Looking back, it was all my parents could do to maintain their composure and still shuffle the kids off to school.

Looking back now, the silence from my living room was the most deafening thing that happened that day. My family has always been commenters, be it during television shows or Thanksgiving dinner.

That day they were viewers.

Being on the West Coast, the events transpired as my sister and I were getting ready for school. As a 7th grader, my friends and I had almost no idea what was really going on. There were announcements made over the intercom at Pioneer Middle School, but for the most part my friends and I still didn’t know what exactly what had happened.

In the following weeks however, all became clear.

Through direct addresses by President George W. Bush, to hearing “Where Were You When the World Stopped Turning” in a never before packed church, the effects of that fateful day, while not immediately recognizable by my 11-year-old brain, were everywhere.

Adults crying. Teachers crying. Learning that my algebra teacher knew someone killed in the attacks.

The most resounding thing I remember from that day was the confusion. The confusion that such an awful thing could transpire. Not understanding what was happening.

For one of the only days in my entire life that I can remember, there was no anger. No retaliation. Just a new feeling of united patriotism that we as a nation was unjustly thrust into.

But we were just kids.
Derek Bullis, Opinion Editor
I remember that cold morning as I was getting ready to go to school.

That moment not realizing it would shape me forever.

I was only in the 8th grade watching terrible images of the people trapped in the towers and deciding they would rather jump than burn.

But the images on TV still always felt so far away, and never really hit home until a year later.

A few of my friends in the neighborhood still only kids fresh out of high school enlisted into the Marines. And when they never came home that’s when the effect really sank in.

Prom was coming up and the girl I was interested in asking out received word that her oldest brother was killed in action when his HUMVEE was struck by an IED.

I almost forgot this was the reason I never went to Prom.

Four years later after the attacks I would find myself walking down the aisle of my high school about to receive my graduation diploma. A sea of chairs with proud parents looking at us all with proud admiration.

Most of those graduating that day would go on to college. Would get married and begin families of their own with in the year.

But I chose a different path still remembering the guys from my town that went to war before me.

Soon it would be my turn.

Boot camp was a sh#$y experience. No other word really for it because you get stripped of everything that you are.

You feel alone, isolated, attacked every waking moment by the Recruit Division Commanders who are professionals at stripping a human of their previous identity in order to make the raw individual that leaves a stronger human being remaining.

An individual that will one day lead other men in combat.

I remember the moment I got word that my best friend had died.

I was still a new recruit and hadn’t even worked for the fleet. It was only my second week of my second combat school.

I would go on to struggle, to be challenged in ways I would never want another human being to go through themselves.

As I run towards conflict I always remember the simpler moments. Those homecomings where the guys I lead go to visit their loved ones and families.

Life was celebrated and I had a hand in bringing that to them.

The best feeling in the world.

It’s been 18 years since that terrible day, and as I remember I think to myself I would do it all the same.

I would enlist again, suffer again, and sacrifice everything again in order to fight for our country’s ideals again but one thing holds true.

I will always remember.