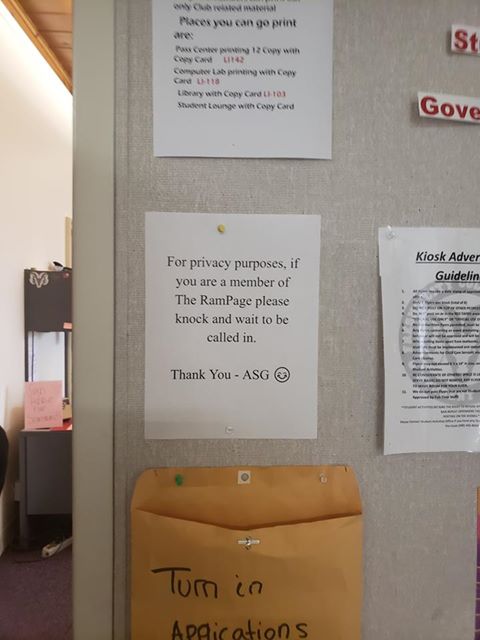 Christopher Washington, the president of the Associated Student Government, was fine with media access when his experience with the Rampage was one glowing profile after another.

That changed when the Rampage began to investigate the relationship between Washington and ASG vice president Angela Van Gilder, following a video interview that went sour. After the two got in an argument on camera, our reporter asked, “Do you work well together?”

We worked to answer that question.

At first, Washington was very forthright in his interviews about his intention to remove Van Gilder from her position. At first.

But when he failed to remove her, and when he lied about a closed session meeting, the Rampage access was slowly curbed. Reporters now have to make appointments through his information officer to speak to anyone. Additionally, in retaliation for a sign on the Rampage door requesting that ASG members knock before entering the office, Washington restricted all access.

The ASG office, much like ASG itself, exists to serve the student body. Their door should be open to anyone attending Fresno City College, except the Rampage, it seems. The ASG members later removed the sign, undoubtedly recognizing the contradiction between their supposed mission and a sign excluding the student-run newspaper of the very campus they serve.

In an email to his senators, Washington described The Rampage as “a steady flow of reporters hazing our association.” Senators are instructed to offer no comment to reporters until they consult Anna Munoz, communication officer and Raezhanique Brown, public relations chair and Washington himself. The sign that he “may or may not post” is meant to guard the ASG “against having reporters come into our office without an appointment,” he wrote.

During the ASG meeting on Sept. 25, Washington again instructed his senators to respond with “no comment” to reporters.

But Washington is a politician and a public servant, even if on the community college level. The Rampage is one of many bridges between ASG and the public. We are a voice, a megaphone, a platform.

That platform suited Washington when the coverage was favorable. When the truth was less glamorous, he pulled back and cloistered ASG away from the prying eyes of the public.

We live in a world where the president of the U.S. has referred to journalists as the enemy of the people. We’re fake news. We’re yellow journalists. We’re propagandists.

Our community is a microcosm of this nation.

Our cover story this issue documents the ongoing dysfunction in ASG, and President Washington’s repeated failure to remove his vice president. We stand by our reporting and our reporters.

We will continue to seek access to ASG. It is our right to probe what happens in our elected student government. It is the right of every FCC student to know. We hope the ASG lives up to its mission and keeps its door open to all students.