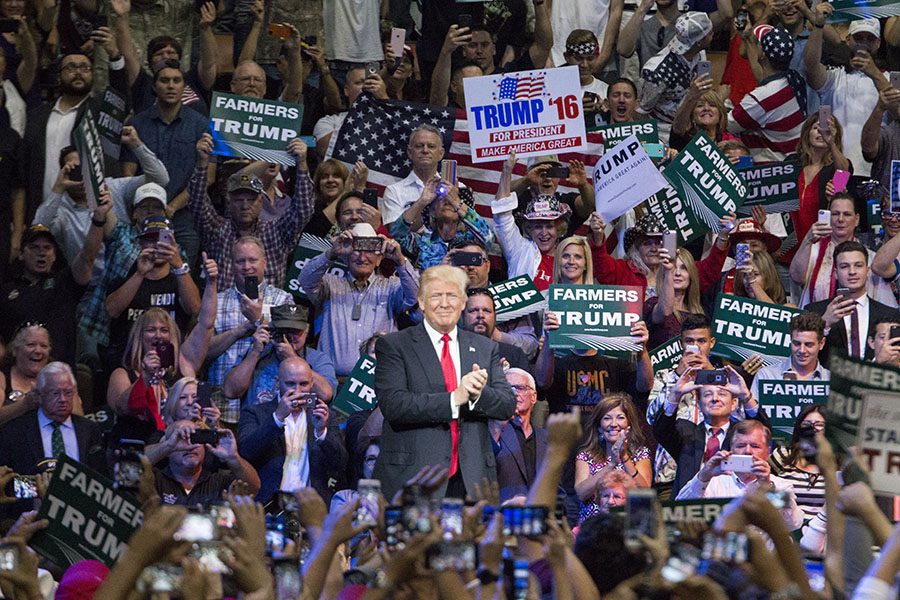 Donald Trump stands in the middle of supporters during a visit to Fresno on May 27, 2016.

Trump Takes Credit for Obama’s Economy, Even as it Crumbles

Donald Trump’s tenure as President of the United States has so far been marred by near-constant scandal, low approval ratings, high profile policy failures, and an administration awash in chaos. But in a first year defined by failure, he had one thing going for him: Obama’s economy.

He took time during the State of the Union to remind us about it. “Since the election, we have created 2.4 million new jobs, including 200,000 new jobs in manufacturing alone. After years of wage stagnation, we are finally seeing rising wages,” he said.

The things he said were true, but not accurate. While the economy has added 2.4 million new jobs since November 2016, a decent chunk of them were added while Obama was still president, and the job growth during 2017 was actually the slowest in seven years, according to the Washington Post’s fact checkers.

Moreover, wages have been rising steadily since the Obama years, and 2017 is another data point on an already established axis of trends.

His party will argue that their tax bill, which permanently and majorly benefits the wealth class while minorly and temporarily helping the working class, is the reason the economy grows. They will say this even as their wildly unpopular legislation runs up a serious deficit.

Trump will argue that his concerted effort to dismantle the Obama legacy, deregulate business, and cut taxes for millionaires and billionaires is the reason the stock market is soaring and the unemployment numbers are diving.

Small business leaders all over the nation feel optimistic that new regulations aren’t coming, even if persistent deregulation hasn’t saved them money. These feelings of optimism are inspired by the Trump White House’s disregard for what business does, the freedom to run wild that he offers. Because of this, it’s hard to believe the business community when it chalks the economy up to deregulation. The conflict of interest is obvious. They have so much to gain from deregulation and so little to lose.

The reality is that unemployment is low, wages are rising, and the economy is growing because of the Obama Administration’s slow but ultimately successful economic recovery. The Obama White House and the EPA were regulatory, they believed that business couldn’t be trusted to look out for workers or the environment independently, so they set their watch dogs in place to safeguard the people and the planet. Despite this, business began to boom, unemployment began to shrink, and millions gained health care.

Trump does everything he can to erase that legacy while claiming credit for its results. That’s why it was so funny when Trump gave a speech in Ohio bragging about the economy even as the DOW dropped thousands of points. It was the kind of drop they called historic, the kind of drop that caused even Fox News to cut away and cover it.

A week before, Trump had taken credit for the stock market at the State of the Union, too, saying it ““smashed one record after another, gaining $8 trillion in value.” But when a president takes credit for growth, he has to accept blame for loss.