Take a Knee Against White Supremacy 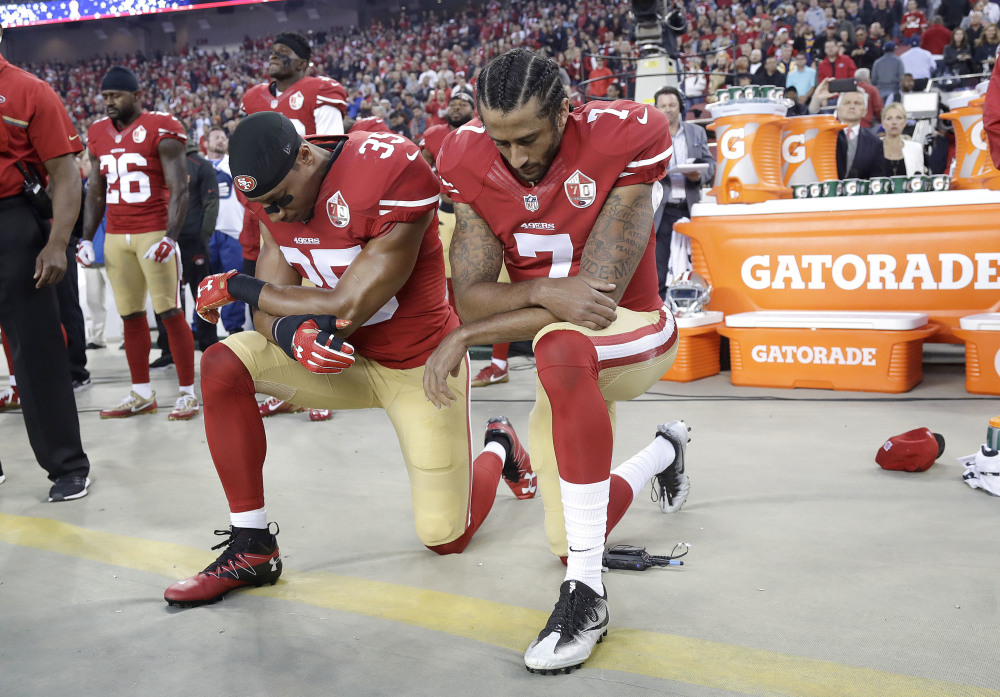 Last year during the first preseason game of 2016 , former San Francisco 49er’s quarterback, Colin Kaepernick took a knee during the national anthem in protest of police brutality and racial injustice.

Since then Kaepernick has inspired other players to take the same action this season.

President Donald Trump publicly condemned the NFL and protesting athletes during what was supposed to be a rallying in support of Senator Luther Strange in Alabama Friday Sept. 22.

“Wouldn’t you love to see one of these NFL owners, when somebody disrespects our flag, to say, ‘get that son of a bitch off the field right now, he’s fired?’” Trump said.

The following day he continued by tweeting, “If a player wants the privilege of making millions of dollars in the NFL, or other leagues, he or she should not be allowed to disrespect our Great American Flag (or Country) and should stand for the National Anthem. If not, YOU’RE FIRED. Find something else to do!”

Trump did not seem to have a problem with protest when the Nazis, or as he likes to call them, “very fine people”, marched in the name of white supremacy in Charlottesville last month.

So basically, Trump loves the first Amendment, except when it comes to football players protesting racial injustice.

According to Trump, the freedoms of the first amendment are only to be enjoyed by Nazis and white supremacists. Athletes who kneel, peacefully, deserve to lose everything.

Black protesters are deemed “ungrateful”, while white protestors have the right to exercise their freedom without being criticized.

This double standard is not an issue of patriotism or freedom of speech, it is an issue of white supremacy.

The Root staff writer Michael Harriot writes, “White supremacy is the structural mechanism built into American society that values whiteness over everything by default. It is not a preference or even a prejudice. It is the dismissive apathy that disregards the freedom and equality of people. It is the repeated placing of white discomfort over bloody black pain.”

Trump is encouraging the idea that black players using the NFL’s platform to speak out against injustice are inferior to white people’s personal feelings.

White supremacy is when white America feels like they have the right punish “ungrateful” black people from using their voice. As if their success is given, not earned.

CNN political commentator Marc Lamont Hill responded to those who considered the protest unpatriotic by saying, “You don’t get to define patriotism for everybody else. People didn’t die for the right to stand for a flag, they died for freedom and justice. And Colin Kaepernick is putting his knee down because there is an insufficient amount of freedom and justice for vulnerable black and brown people.”

Hill continues to explain how thinking that the owners can control what and how their player protest is plantation mentality. They are exercising their First Amendment right, and if Trump is not in favor of white supremacy he would stand up for everyone’s right to freedom of speech, not just white people’s.