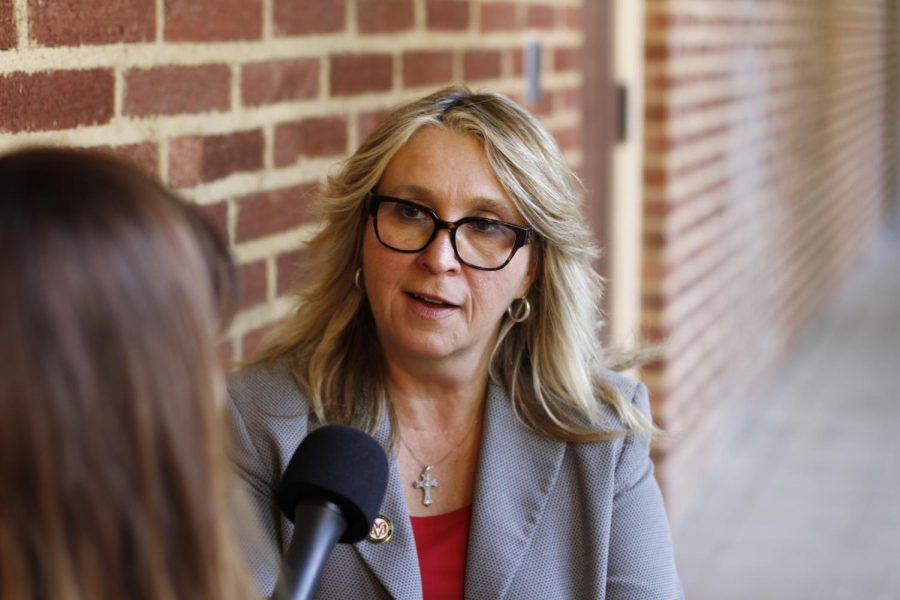 From her office in the OAB, Carole Goldsmith, president of FCC works to ensure that all students have every possible resource to take advantage of the opportunities they have for an education here on campus and beyond

Several improvements have been made to the parking lots on campus while the college community waits eagerly for the announced parking structure.

“We are doing things that are incremental, but we’re not waiting for the building [parking structure] to be built,” Goldsmith says regarding the current parking situation.

Goldsmith encourages students to consider alternatives to parking — including the FCC/FAX joint bus pass which enables students to ride the city bus anywhere for free, simply by using their student body ID cards.

“It’s a funding stream that may not be around forever,” Goldsmith said, adding that students should take advantage of the pass to expedite their travel to and from campus and avoid the jostle of fighting for a parking spot.

Dr. Goldsmith also applauded the district for acknowledging the need and approving a parking structure for FCC. She said the next steps involve the board of trustees approving the construction.

One existing parking lot that needed repairs over the summer was in fact reconfigured to add 60 additional parking spaces on the current lot, Goldsmith said.

Goldsmith encouraged students to be good stewards when it comes to traffic congestion, to understand that the parking issue will not disappear overnight and to be understanding of one another to reduce road rage and parking lot rage.

Regarding the tough question of enforceability, Goldsmith said, “We would like to start with positive reinforcement first.”

Goldsmith said the decision is in line with much of the state of California and follows the policy that the board has adopted and FCC will be implementing.

“There are opportunities for people if they want to get help in quitting smoking,” Goldsmith said, citing student and health services as well as societal trends which show smoking is becoming less and less common.

She said there are fines associated with smoking on campus, but the police will give warnings first.

“Not smoking is healthy for you and so I’m trying to get that message out,” she said. “Yes, you’re an adult. Yes you can smoke. I just don’t want you smoking here.”

Goldsmith said, citing her concern for students and their well-being.

Goldsmith and the rest of the college leadership want to reassure the community that safety is a top priority and an action point here on campus.

“We’re increasing our safe places training for anybody who’s feeling endangered,” Goldsmith said. “They have the training needed to give that student resources.”

Goldsmith listed other resources that are available to students, including legal services at the Dream Center for students who may be affected one way or another by immigration status concerns.

“We also have a speaker series to try to be able to create a safe place for people who have divergent ideas and be able to continue to have the conversation in safe ways,” she also said.

Goldsmith praised the safe zone training, which helps students to feel safe on campus regardless of status or identity.

“Our world is becoming much more volatile and scary,” Goldsmith said.

She said the new mantra on campus should be, “If you see something, say something.” She does not restrict this mantra to just dangers on the FCC campus.

Goldsmith said she is concerned about the uptick in domestic violence and in students who struggle in other ways.

“The more present danger I see is students who are in abusive relationships,” Goldsmith said.

Goldsmith said she continues to fight for a Title IX compliance officer to help ease some of these issues and create channels for students. She said that the college’s psych services office works with the district to get additional resources to help students with these issues.