Students Against Vaccine Mandate. A Big Problem for SCCCD? 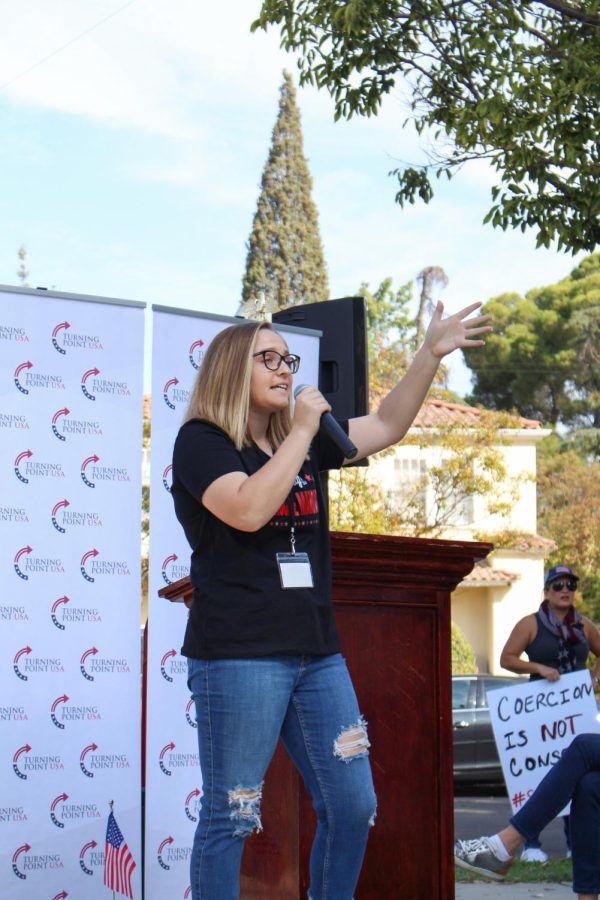 On Oct. 7, a local Turning Point USA chapter held their “Ram up Against Vaccine Mandates” rally at Fresno City College.

According to Addison Werth, chapter president, the goal was to get the State Center Community College District to rethink the vaccine mandate going into effect on Nov. 15, 2021.

“I think the SCCCD should respect that choice as they are not healthcare providers and they are not advised to make medical decisions for students,” she said.

The plan was to set up on the sidewalk of east McKinley Avenue, however due to spacing issues, the rally was held on the corner of north Maroa and east Weldon Avenues.

Approximately 100 people attended, most were community members of all ages, including some young children, and a handful of students.

Werth said she was anticipating more people to come and disagree with what the chapter stands for, but was glad it was only one person.

Said counter protester was a man named Richard Moore, who lives across the street from where the rally was taking place and could hear everything from his backyard.

At the rally, he yelled about the efficiency of vaccines and tried to talk over the guest speakers. People who were there for the protest tried to block Moore with their signs and get him to leave. An elderly woman stole Moore’s hat twice, dropping it into the street and stomping on it at one point.

Moore, who has two bachelor’s degrees from Fresno State in Microbiology and Engineering, and has worked at the Jet Propulsion Laboratory at NASA, said he attended to advise people of the vaccines’ efficiency so they later can’t claim ignorance.

“In 50 years, all these people here will be pretending that they were never here and they never had anything to do with this. They will be embarrassed in front of their children to admit they were doing this sort of thing,” he said.

He also cited many other times in US history where vaccines have been mandated, dating all the way back to the American Revolution.

After the altercation between Moore and the other protestors Werth said, “This is an event by the students for the students to protect our right to decide what goes into our bodies. This yelling is unacceptable. We are on the right side of history.”

Overall, Werth believes the chapter’s message really came across, especially when she spoke to SCCCD Interim Chancellor, Douglas Houston, who was present at the rally.

According to Werth, Houston said that when the vaccine mandate was made they had not considered opposing opinions.

Despite this, Houston said the board of trustees tries to listen to as many voices as they can when making their decisions.

When asked if he supported the rally, Houston said, “I support the board’s policy, but I also support anybody who speaks their mind and wants to influence the decision of any legislative body. So I support the activities that are going on here absolutely.”

The interim chancellor wasn’t the only SCCCD employee at the rally though. Teresa Tarazi, FCC English Professor, said she has a few concerns about the vaccine mandate and lack of clarity on it.

She said the SCCCD has made the process to request and receive religious exemptions from the mandate too complicated.

According to Tarazi, Fresno State students seeking religious exemption only have to click yes and provide their name. Meanwhile, SCCCD students must answer four questions in essay form which she said many don’t know how to do.

She added that there was no information about religious exemptions on FCC’s website a few days ago when she checked and when students asked during the Oct. 1 open forum, faculty did not respond.

“It’s confusing. What they’re doing is making it very difficult for students. So that you go, ‘Well, you know what? Just forget it. What am I going to do?’ Either walk away. So you get screwed that way. Or take the shot and you get screwed because it really wasn’t your choice,” she said.

Another concern is that FCC is asking instructors to work with students who do not meet the vaccination deadline, but Tarazi believes some might refuse to and students will fall behind.

For this reason, she believes the mandate should have been moved back so students could finish out the semester and their financial aid is not screwed up. According to Tarazi, students’ may be penalized financially if they fail courses.

Overall, she believes that students should be given all the information needed to make critical decisions for themselves.

About her attendance at the rally, Tarazi said since it is a student-led rally, she wanted students to know she is here to support them.

While many of those in attendance at the rally were not students, some were.

Diego Rivera, student at FCC, said he agrees with the purpose of the rally, the protestors and sees the mandate as a violation of human rights.

Now that he’s back on campus, he said he doesn’t know how the mandate is going to play out or if he will be able to gain religious exemption, as he believes in his own natural immunities.

Overall, Rivera felt the rally had a good turnout with good signs and great people.

“I’m glad that people are out here doing this. I’m not the only one concerned about it. That’s what makes me happy, people trying to organize and get more numbers for this stance on freedom,” he said.

Rosalinda Perez, licensed psychiatric technician who wanted to enroll into the nursing program, chose not to because of the mandate and will instead continue her alternative lifestyle career.

Perez attended the rally because she believes everyone has the right to make their own choices.

“It’s not right. They’re suppressing our people and I’m not f****** okay with any of it. I’m tired of  being quiet. We have been suppressed for hundreds of years,” she said. “This is bigger than color and politics, this is humans.”

Perez added that she is concerned about the vaccine because she believes they are “meant to poison people and kill them off, as that’s always been the objective of the founders.”

Also at the rally was Fresno City Councilman Gary Bredefeld, who was one of five guest speakers.

During his speech, Bredefeld said everyone should have the choice of getting the vaccine or wearing a mask and not having that right is unconstitutional.

According to Werth, the Turning Point USA chapter plans to keep speaking out at SCCCD board meetings and host one more event before Nov. 15, 2021.