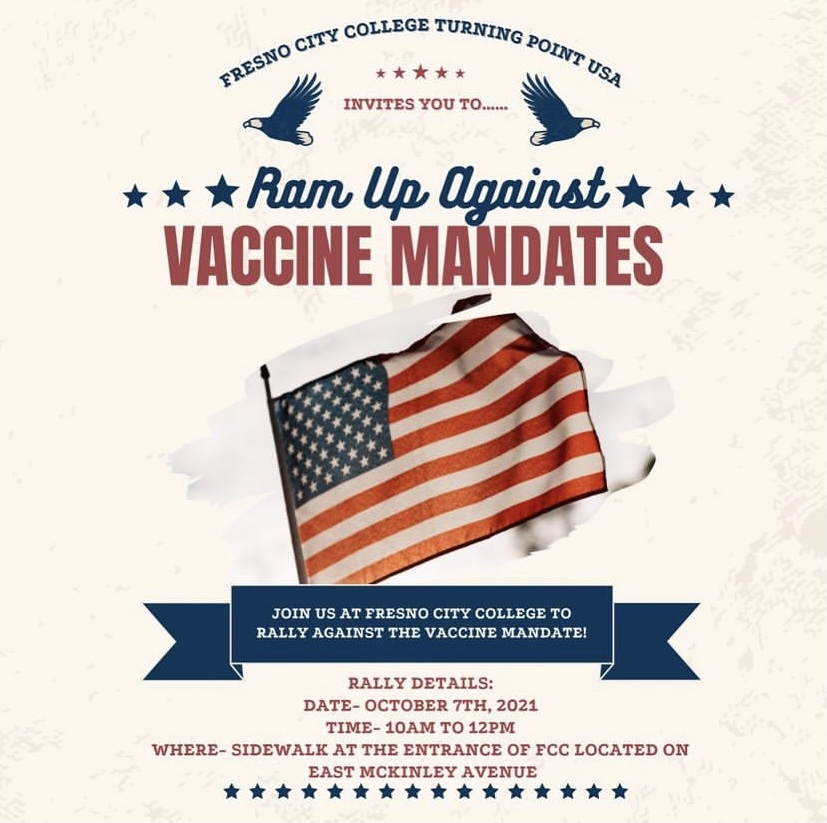 To establish a club on campus, there are a number of procedures that must be met by a designated deadline. Bonilla said FCC didn’t receive any paperwork from the chapter by that deadline.

Addison Werth, president of the Turning Point USA chapter, was a student at Fresno State who transferred to FCC when Fresno State issued the vaccination mandate.

She was motivated to start the Turning Point USA chapter after the SCCCD also passed a vaccine mandate.

Werth believes FCC leans more towards the left on the political spectrum, but having Turning Point USA will help center FCC.

“Instead of shutting down other student’s opinions, we happily welcome open dialogue from those that might not share our same sentiments on certain issues, which unfortunately is rare nowadays due to our incredibly toxic political environment,” she said.

To get the name of the organization out there to the students and community of Fresno, Werth and White came up with the idea of holding a rally against the vaccination mandate.

Since the SCCCD vaccination deadline got extended to Nov. 15, Turning Point USA is using that as an advantage.

The goal is to bring awareness to the mandate in hopes the SCCCD relooks the decision and potentially takes away the mandate.

“If you want to take the vaccine, great. If you don’t, great. It shouldn’t be a problem, especially when only 33% of classes are in person,” Werth said.

The rally will be on Oct. 7 from 10 a.m. to 12 p.m. and will be on the sidewalk at east McKinley Avenue, near the entrance of FCC’s campus.

There will be no mask requirement due to it being an outdoor event.

Werth wanted to hold the rally on campus but she faced limitations in auditorium space and did not get a response from faculty.

With no involvement with FCC, the organization received funding for the rally with activism grants from Turning Point USA headquarters.

At the rally, Turning Point USA will host speakers such as:

Werth said that so far there has been a positive reaction from the public about the rally, as students feel that at least there is another opinion about the vaccination mandate.

Poonam Rattu, nursing major at FCC, found out about the rally through social media.

Rattu said she agrees with the chapter’s message and desire for individuals to have the right to decide what they put in their body.

Though she is vaccinated, she believes the choice should be made by the person, not someone else, as they may have their own reasons to not take the vaccine.

“Whether it is for religious reasons or fear that their bodies would not react well to the vaccine, people should try understanding where they are coming from,” she said.

Rattu will not attend the rally. However, she believes the rally and organization would allow the voices of those who often get overlooked be heard.

When asked about a counter rally possibly showing up, Werth said she is open for conversation but does not want anything to resort to violence.

“We are not anti-vaccine. This is not a pro-vaccine rally. This is simply giving students the freedom of choice to make their decision,” she said.