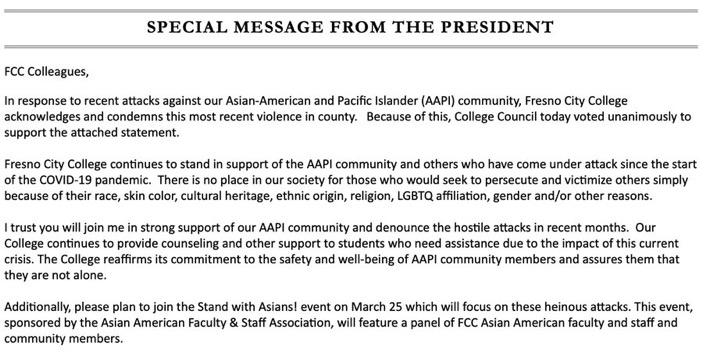 Fresno City College's President Carole Goldsmith has issued a statement regarding the increase of hate crimes against the Asian and Pacific Islander community.

Following the increase of violent hate crimes, Fresno City College has issued a statement to show their support to the Asian-American and Pacific Islander community.

In the statement, FCC President Carole Goldsmith said FCC stands with the AAPI community and is providing counseling for those seeking help.

President of the AAFAS, Tchay Her, said the, “Stand With Asians Table Table” event originated from a discussion in which a member of the group expressed they wanted to spread awareness on hate crimes.

The other members of AAFAS supported the idea because they believed the subject was important and urgent to discuss so they met in short time frames to put the event together.

AAFAS’ table talk event happened to be a week after the Atlanta shooting, which led Her to believe it was even more important to host the event.

By hosting the event, AAFAS  hoped to encourage viewers to stand up for themselves, speak up when something is wrong and know that they are not alone, according to Her.

At the beginning of the event, FCC President Goldsmith briefly mentioned that the State Center Community College District Board of Trustees passed an anti-racist resolution which was voted on unanimously.

The anti-racist resolution was voted on is a commitment that every community member does not feel discriminated against based on their color, also everyone feels safe, valued and like they belong, according to Goldsmith.

Cho believes the “Stand With Asians Table Talk ” was a good event and that AAFAS should continue to host different topics each semester, aside from the hate crimes.

“We have to make a statement or take a stand,” he said. “In other words, if we stay quiet as the Model Minority, that empowers others to dump all their trash on Asian Americans. It is like ‘just shut up and take what we give you.’”

Her agrees with Cho that FCC needs to publicize Asian hate crimes more and that there should be more workshops on this topic and other Asian-related topics to bring awareness to them.

For Chanthavisouk, seeing the support FCC is showing on the website shows that the college cares about their voices, identity and acknowledges the recent events.

Another way FCC can help Asian students and staff feel safer is by adding more security on campus, according to Chanthavisouk.

Since April is Asian American month students’ activities are hosting different events since Asian Fest cannot be held in-person this year due to the pandemic.