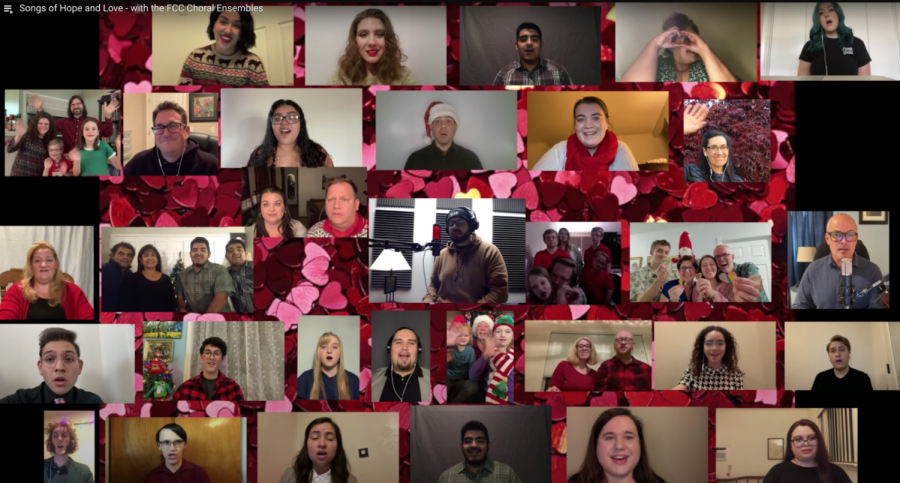 Fresno City College’s choir program has continued to bring music to the world, despite challenges the COVID-19 pandemic has brought.

In an effort to bring music to the community, the choir held a virtual concert, entitled “Songs of Hope and Love,” for their annual holiday concert in December 2020.

The concert was a 35 minute YouTube video consisting of individual student clips edited together to make one large virtual choir.

Head Choral Director and FCC Instructor, Julie Dana, directed the choir and edited the video together with help from her husband, Mike Dana, who did the sound.

Dana said she didn’t start learning how to edit until early October 2020 and spent many sleepless nights trying to get the video perfect.

And although editing took a lot of effort, Dana wanted students to know that she was learning along with them.

“Me as a teacher, if I show you, my student, that I’m still learning after teaching for 37 years,” she said. “That shows you can always learn more, and do more, and not be discouraged, but to reach out and go ‘What else can I do?’”

For Dana, the concert was a “labor of love,” she felt was needed in order to help, “Push more love into the world.”

In addition to virtual concerts, there was a struggle of trying to have weekly Zoom rehearsals and classes, which are difficult compared to those in-person.

At the beginning of quarantine in March 2020, the choir did not get to perform any of the music they had been preparing, according to Dana.

Since then, she has tried to keep consistent Zoom times so students can get the interaction they need.

For Emily Ellis, child development major in FCC’s City Singers group, the choir class became, “That one Zoom class that I could just escape from everything else and I can just hang out with friends.”

Other students have had a harder time with the transition to remote learning.

“I don’t think I’ve ever been able to not stand next to my peers and hear them and sing with them and make music with them,” said Samantha Arrellano, a fifth year Vocal Education major, also in FCC’s City Singers. “It was really hard for me to want to make music again.”

But as of last semester both Dana and her students have managed to find ways to keep class and rehearsals running.

One song from the concert, “What the World Needs Now is Love” arranged by Dana, was shown at the Community College League of California’s Trustees conference on Jan. 20, 2021.

The state board of trustees and FCC’s President Carole Goldsmith were in attendance at the conference, according to Dana.

The video showcased all of the FCC choral students as well as choral directors from other schools. Both Ellis and Arrellano are featured as soloists in the video.

Getting to see the concert come together gave a lot of hope to the students, showing that their hard work was paying off, according to Dana.

“It’s what we do. It’s our community, and at that moment, they remembered what it is we do,” she said.

Although Dana reports enrollment numbers have dropped throughout the Choral Music department, she hopes students will come back once FCC returns to in-person instruction.

“I’m really proud of my kids, they’re troopers and they’re fighters and survivors”, she said.

FCC’s choir has an upcoming concert on Feb. 26, 2021 which will be available on their YouTube channel.

The concert is in celebration of Martin Luther King Jr. and is a collaboration between FCC and Fresno State’s choral program, directed by Cari Earnhart.