Fresno City College’s Conversation on the Transfer of Power 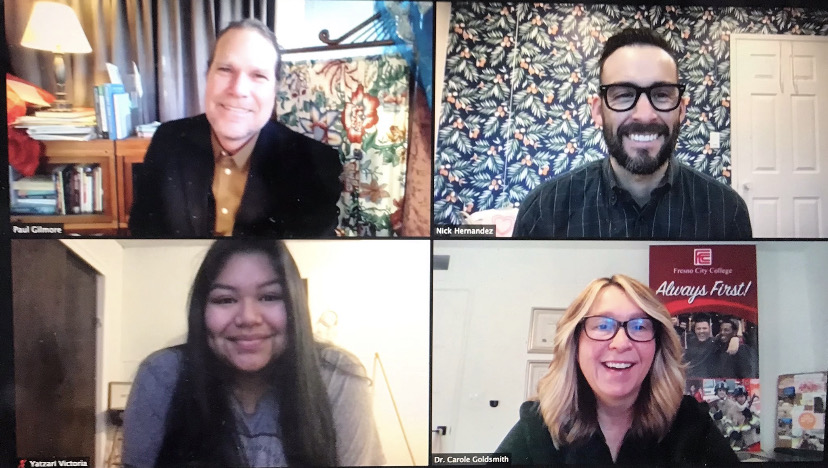 On the morning of January 20, 2021, President-elect Joseph Biden was officially sworn into his four year presidential term.

In preparation for the transfer of power, Fresno City College President Carole Goldsmith and Associated Student Government President Yatzari Victoria held a community conversation via Zoom on Tuesday Jan. 19 about the political and historical importance of events such as Wednesday’s inauguration.

The mastermind behind Tuesday’s meeting was Victoria, who was eager to discuss recent events fueled by 2020 election results.

“We play a role in the health of democracy, in terms of how we can be a catalyst for civic engagement, civic discourse and of course our primary goal is to transform lives through education,” Goldsmith said about the importance of these kinds of discussions.

In regards to how the 2020 election came to be, Hernandez briefly explained the Electoral College, the Constitution and the many election laws that have been introduced over the years.

Getting more into the tension between the former President Donald Trump and President Biden, Hernandez clarified that although the Constitution and state laws call for the need to transition from one presidency to another, these legislations do not necessarily state the transition must be peaceful.

A peaceful presidential transition is just something Americans have come to expect because it has happened in the past, according to Hernandez.

“An election occurred. There is a winner and now there is a loser. We may have disagreements but this is the system that we have and it has worked up until this point,” he said. “So we continue to do it. It becomes institutionalized.”

On the other hand, Gilmore took a different route and talked about the events that have occurred over the last few weeks such as the Jan. 6 Capitol Hill insurrection.

The “silver lining,” as he described it, of these recent events is that they have been a break from traditional political norms and have shown Americans that nothing in politics is inevitable.

Gilmore then went on to talk about the divisiveness that has always been present in American politics which he believes is inevitable and necessary.

“While some moments in our history seem less divisive than others,” he said. “There have always been crucial, really important political differences in America, I would argue even irreconcilable differences but we remain one country.”

Hernandez spoke about his admiration for how younger generations united and worked collaboratively to encourage one another to vote in the 2020 election.

“It is really interesting what happened in Georgia and states like Georgia that are sort of turning purple, that will continue to happen because of young voters, which is really exciting,” he said.

At the end of the Zoom meeting, Goldsmith announced that another community conversation is in the works. The next topic will be about social media’s impact on politics.