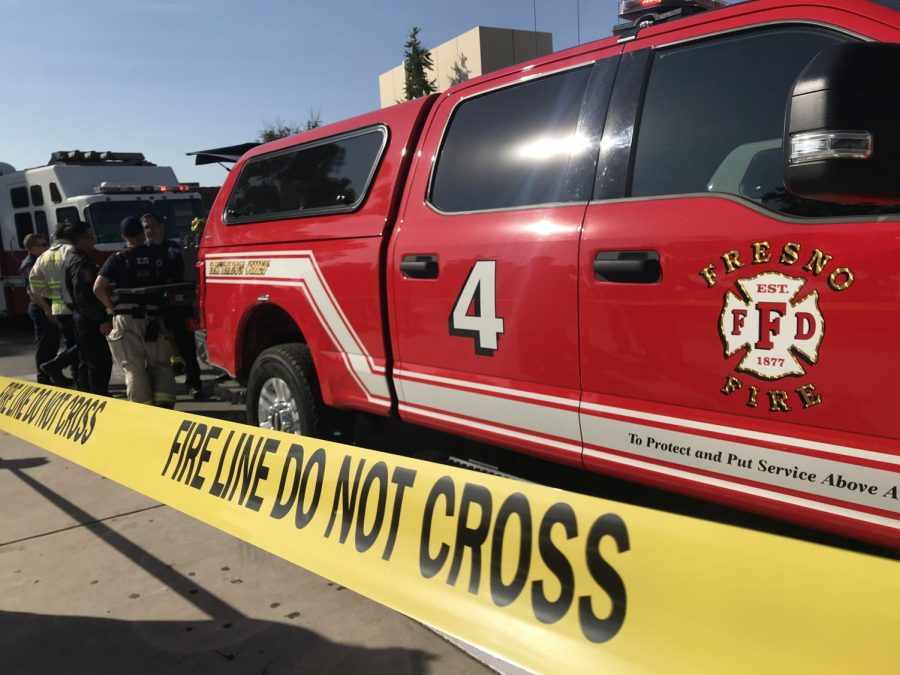 Police and Fresno Fire Department keep the area clear as students are treated and the FCC Math and Science Building is evacuated at 10 a.m. on Thursday, Oct. 10, 2019, following a chemical spill.

Four students are undergoing treatment after being exposed to an unknown substance during a chemistry lab at Fresno City College, Thursday morning, Oct. 10, 2019.

Students followed proper protocol of chemical exposure by immediately rinsing the substance off in designated sinks and showers.

“The water from the emergency shower, due to high volume and being on for 5 minutes as required, flooded the floor and impacted the room below,” said FCC President Carole Goldsmith in a midday statement to students, faculty and staff.

Showers were added to the building in 1995 and proper drainage was not available in the decades old building. The showers have only been used one other time, according to FCC Public Information Officer Kathy Bonilla.

Because the chemical is not known, treatment for the students has proven difficult. Students have been transferred to the hospital to treat minor injuries, according to Public Information Officer for the Fresno Fire Department, Robert Castillo.

“There were seven chemicals that were in normal use in this chemistry lab,” Castillo said, “We are still trying to identify the exact [chemical].”

One of the victims was exposed to the chemical only after attempting to help the other three victims, according to reports.

At approximately 9 a.m. a campus alert was sent out to faculty and students warning that emergency services were on campus and that the Math and Science building would be closed until further notice.

All classes held in the Math, Science and Engineering building are cancelled for the day, but campus officials expect the MSE building to be open tomorrow for all scheduled classes.

Kris Hall contributed to this story.

This story is developing and will be updated as more information becomes available.