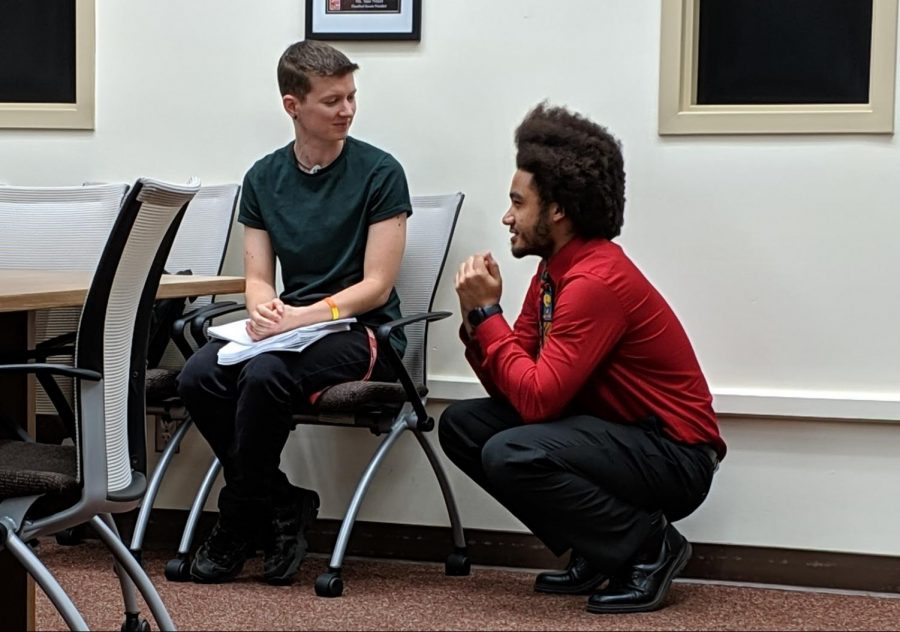 DeRon Walker, right, is the new ASG president. Here he is at a meeting to discuss the need for all gender bathrooms on campus, on Tuesday, Sept. 3, 2019.

DeRon Walker, 29, is a busy man, juggling his job, Associated Student Government presidency and responsibilities as a husband and father, all while staying on top of his classes.

“I never get sleep” he said, only half-joking. “Really it’s about managing your time. Study your syllabuses, make sure you’ve got your scantrons and whatever else you need before class begins. Definitely look at your syllabus more than just the first day of class.”

An example of his dedication to time management, he finishes school assignments ahead of time, never at the last minute. Walker also said he addresses emails as soon as he sees them in order to stay on top of ASG concerns.

Walker is a computer engineering major in his third year at FCC and in his first semester as ASG president. He was born in Fresno and wouldn’t dream of leaving. While others might want to leave, he sees too much potential in Fresno to give up on it.

For the benefit of his success, Walker surrounds himself with a loving and supportive family, which includes his 12-year-old son DeChris Walker.

“I absolutely would not be able to do what I do without support from my family,” Walker said. His upbringing was decidedly different, lacking support.

He never knew his father. When he was 12, his mother was incarcerated. Shortly thereafter his grandmother sold the house that Walker and his siblings were living in and left.

Walker was left with no legal guardians after his grandmother left, and said he technically should have been in foster care. He was only capable of supporting himself at such a young age by spray painting address numbers on curbs.

As a young entrepreneur, Walker was able to bounce around from couch to couch, making money when he could for much of his adolescent life. Survival was paramount from ages 12 to 17.

At 17, he decided to drop out of high school to take care of his niece and nephew. Shortly after, Walker decided to have a child of his own. DeChris Walker was born out of Walker’s enthusiasm to give love and to receive it–deciding to start his family at 17.

Walker worked to ensure the success of his family and to address health concerns about his son, who was born two months premature. “He was wearing a diaper about the size of my palm, and it was huge on him,” he said.

Ultimately Dechris Walker pulled through and overcame his health issues. He is now a healthy, thriving 12-year-old interested in pursuing the subject of English.

Walker said his family survived mainly off of Top Ramen. After so many years of the same noodles every night, he can’t stand the stuff. He cooks homemade meals for his wife and son every chance he gets.

Walker said being a dad is something he is grateful for every day.

Before enrolling at FCC he settled into a comfortable position at work and was considering a part-time pursuit in education. But circumstances resulted in job loss, forcing Walker to reconsider his plan–piloting his entire college endeavor.

“I never wanted to witness that [job loss] happen to me or my family anymore. It was tragic to go from thinking I was stable and comfortable to not,” Walker said. “So, I just got into school and ran with it, and it’s been the best decision I’ve made yet.”

He quickly joined the student activities office where he was able to help students directly and address their individual needs, he said. It was during his work there that he developed a relationship with the ASG.

At the ASG meeting on Aug. 27, Advisor Ernie Martinez said, “This is the strongest ASG so far.”

Walker said he was initially intimidated by the ASG presidency. The ASG officers on campus always looked undeniably professional. He encountered them at his job and often wondered if he had anything to offer. “I would help on the sidelines but I didn’t need the recognition for it.”

His first position in the ASG was as the elections commissioner. It wasn’t until the ASG scandal in 2018 when Christopher Washington, former president, was arrested and ultimately convicted for dissuading a witness, that Walker was finally interested in running for president.

Walker said he is proud and honored to be a part of ASG this year. “Dr. Martinez has seen a lot of different faces in ASG over the years, so when he said that [‘This is the strongest ASG so far’], it meant a lot to me.”

Walker hopes he can have a lasting impact on students.

“I want my legacy here to be for students to feel that their voices can be heard. Not just at FCC, but a national politics as well. I’m only going to be able to do that by working with others. I need as many people on this campus who are willing to help others and want to help, all working together. With that I believe I will be able to leave behind a legacy I am proud of.”

Walker says he sees a diverse community at FCC. “Even our international students program and students without legal citizenship are welcomed here.” He said that he loves how the college encourages all walks of life. “[The administration] really believes in what I believe in,” Walker added, “college is for everybody, and should be available for everybody.”

Walker said, “Bring me any questions or concerns. I’m here to help you.”

Walking around on campus it is easy for students to see that the ASG president has notably amazing hair. “The secret,” he says, “is shampoo and conditioner.”