Combs Holds Her Own at Poverello House 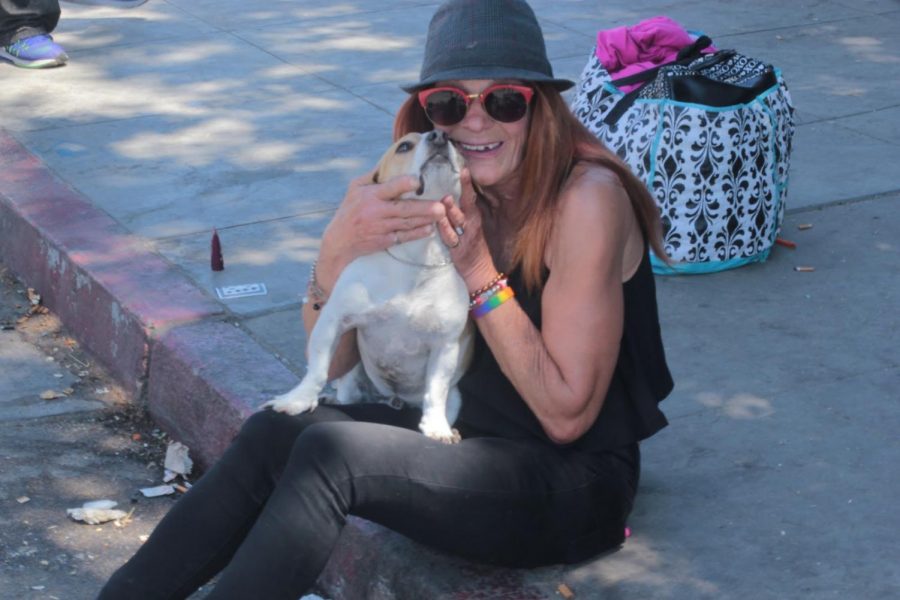 "This is my little bruiser boy. He's good protection. He don't like aggressiveness. He's a good alarm, he does not hold back barking, and he barks at people who are no good. He has sense and I'm grateful to him. He's my best friend." Marianne Combs with Shiloh, April 24, 2019 outside of Mike McGarvin Jr. Village of Hope.

“I’m homeless. I’ve been out here on the streets for six years. It’s not a picnic,” said Marianne Combs, standing about 4 feet, 11 inches. “It’s hard, especially being a woman out here.”

Combs stands out; she sports a nude lipstick and pink blush. She looks showered and well groomed. She is very animated, even so early in the morning.

“You know, [women] are picked up or pimped out or get into drugs real heavy, and it’s rough out here. I call it a concrete jungle,” Combs said. She ended up the streets at the age of 57. Her husband of 41 years had just died.

Her puppy, Shiloh, is both her main companion and protection in an environment she says is not suitable for a woman such as her, or anyone for that matter. But even in the midst of her struggles,Combs and Shiloh try to stay positive.

“I’m always helping; you can ask anybody out here about me. I’ve never denied anybody food, clothing or shelter,” she said, now sitting on the curb and petting Shiloh, “I’m a caretaker. I like to take care of people, people that are sick, elderly, the weak, the meek, animals.”
How She Ended Up Here
“I’ve been out here for six years, and you know it’s hard. I’ve got health issues right now, and I’m trying to get housing, but I’ve been in there, oh God, since June of last year in the village,” Combs said.

The Poverello house provides overnight shelter at their villages, and emergency shelter at Naomi’s House.

“They are for people that are supposed to get housing within six weeks; I’ve been in there for nine months going on 10 months, and I still haven’t gotten anything. I feel like I’ve fallen through the cracks.”

Her previous life was very different.

“I owned my own home and everything. But I couldn’t come up with $2,000 in back taxes, property taxes, because they’re all tied up in everything when a person dies for a month and a half,” Combs said. “So, I lost everything.”

“It’s a blessing and a curse being beautiful and out here because I’m not an object,” Combs said. “I’m a human being.” As she spoke, a man, mumbling incoherently, walked up. Combs’ demeanor changes; she seems to be on alert and eyes the man repeatedly.

“And I take people for face value. I don’t expect much from anybody out here because it’s hard enough just taking care of yourself.”

The assistance she receives from the Poverello House include “services from the clinic for health reasons.” Combs uses the Women’s Center for “hygiene and showers and cleaning up.” She spends her nights in the village.

Directly in front of the Poverello House is a new building complex that appears clean from the outside. Combs told a different story about the inside and the people it shelters.

“They take in people that are mentally disturbed. They should still take care of themselves, but they need to be housed in separate living area because people do take advantage,” she said.
Combs says that new residents take the shelter over, and sometimes mentally ill residents are afraid to do anything, becoming prisoners in their own home.

She says the real stories rarely get to the public.

“It’s the truth. There’s a lot of s**t out here that needs to be taken care of or at least addressed,” she said. “They’re saying people aren’t getting taken advantage of. There’s thievery, really bad.”


Rampant Crimes
Combs noticed that a black grocery bag on the ground beside her was gone. Someone had taken it while she spoke.

She suddenly seems anxious and afraid. Combs is ill and is exposed to violence and crime daily. She has even been sexually assaulted.

“I’ll be 63 this year. It’s on and crackin’ for me; I shouldn’t be out here,” she said with a distressed look on her face. “Lately there’s been a lot of rapes going on. You know that’s kind of a surprise ‘cause I’ve been out here six years and you just hear about it once in a blue moon, I happen to be one of those.”

She didn’t report it because she was fearful. “But you know I’m no worse for wear. I’m here. And I’m not gonna whine over it. It happened.”

Combs said the rape caused her a lot of pain, and that at some point, her alleged assailant went to jail and her “homeboy” paid him a visit after which the alleged assailant was confined in the infirmary for two weeks. Jungle justice, politics or simply survival.

Poverello House policies ensure that Marianne and others are safe within their walls, but they cannot control what happens outside of them. The center’s meal plans are generous and include three meals a day, five days a week and breakfast and dinner on Saturday and breakfast and lunch on Sunday.

“If I miss it [a meal at Poverello], I wait till the next time around, dinner,” she said. “If it’s not too late, and people are still eating, but they’re not serving, they give you a sack lunch. But they try to get everybody.”
Helping the Homeless
“We’re homeless,” she asserted. “We’re not bums. At least I’m not.”

She credits the Poverello House for making life more liveable.

“They’re doing a good job. They’re doing what they can for as many people as are out here,” Combs said, scooping up Shiloh.

Combs is philosophical about her situation.

“This is a test for me. God brought me out here for myself to show me that what happened to me was bad but there are people out here that are worse,” she said, pointing to tents around the area. ”It has changed my whole attitude in life. I actually love myself now. I used to never do that before because I was always selfish.”