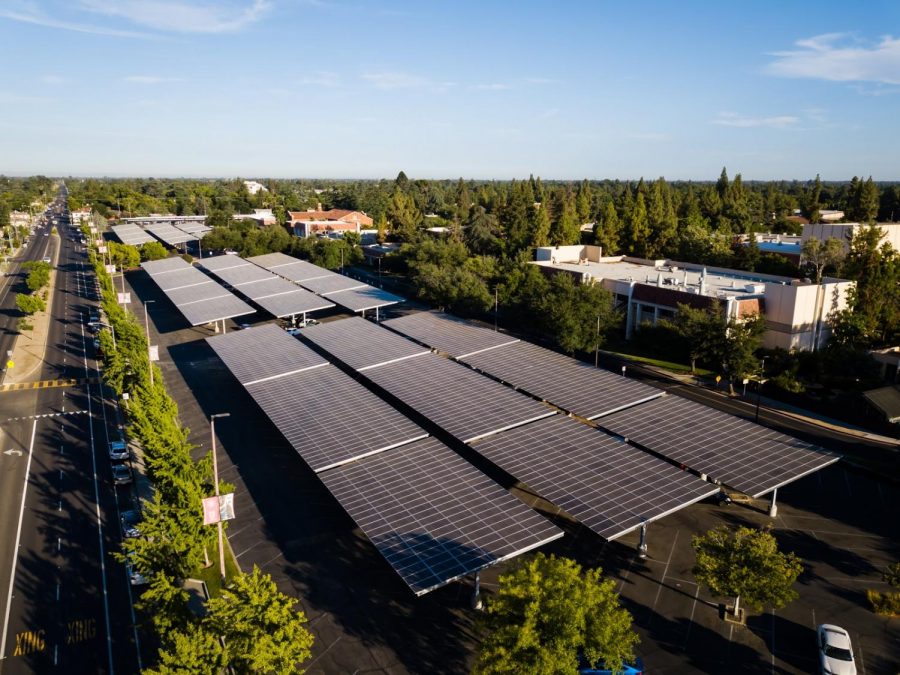 What began as a controversial proposal by the State Center Community College board of trustees has now evolved into a successful endeavor.

The district’s parking lot solar panel project is proving to be a resounding success, which over the next 20 years, is projected to save Fresno City College $6.2 million and $17.8 million district wide. This project is just one of many the district is pursuing in the name of eco-consciousness.

“It [solar panels] is something we’ve talked about for years, but the upfront costs never quite penciled out, until now,” said Shannon Robertson, director of construction services for the district.

The current solar panel project was first presented as a 20-year-lease to the district by School Project for Utility Rate Reduction (SPURR), a program aimed to procure alternative energy systems to California public school districts.

“What attracted us to SPURR’s proposal was that there was no upfront cost, guaranteed production, and maintenance included for the life of the lease,” Robertson said.

Also included in the proposal was shading for the parking lot, additional lighting, and four electric vehicle (EV) charging stations.

The implementation of the solar panels represents a major step forward for the reduction of FCC’s, and the district’s carbon footprint. For FCC alone, the solar panels produce 3,904,101 kWh worth of energy, a reduction of a whopping 2,744 metric tons of CO2 output, equivalent to the amount of CO2 produced by 580 passenger vehicles per year. The project’s shaded parking also adds the benefit of reducing idle time for vehicles in summer due to A/C cooling.

As for future campuses, such as the West Fresno branch, Robertson said, “While solar panels won’t be in the initial build out, infrastructure in parking lots and buildings will be solar-ready.”

She said the solar panels haven’t been included on the campus’ plans because of budget constraints which are causing the district to focus on the new campus’ educational programs.

Despite proving to be a major force in cost and energy saving for both the college and the district, the project initially encountered some resistance. “There was some push back from people who were concerned about the tree removal in FCC’s parking lot,” Robertson said.

To mitigate this concern, the district is working with Tree Fresno to implement the adoption of a tree planting project. Also in keeping with “going green”, the district has accepted a grant from Tree Fresno, a non profit focused on increasing Fresno’s greenery, to replace dead and dying trees or inappropriate trees on the district’s campuses and replace them with more sustainable species.

The district’s project with Tree Fresno will grow more tree groves across its four campuses. Robertson said, “We have a lot of beautiful trees in this area, and we hope to incorporate that on our campuses through Tree Fresno.”