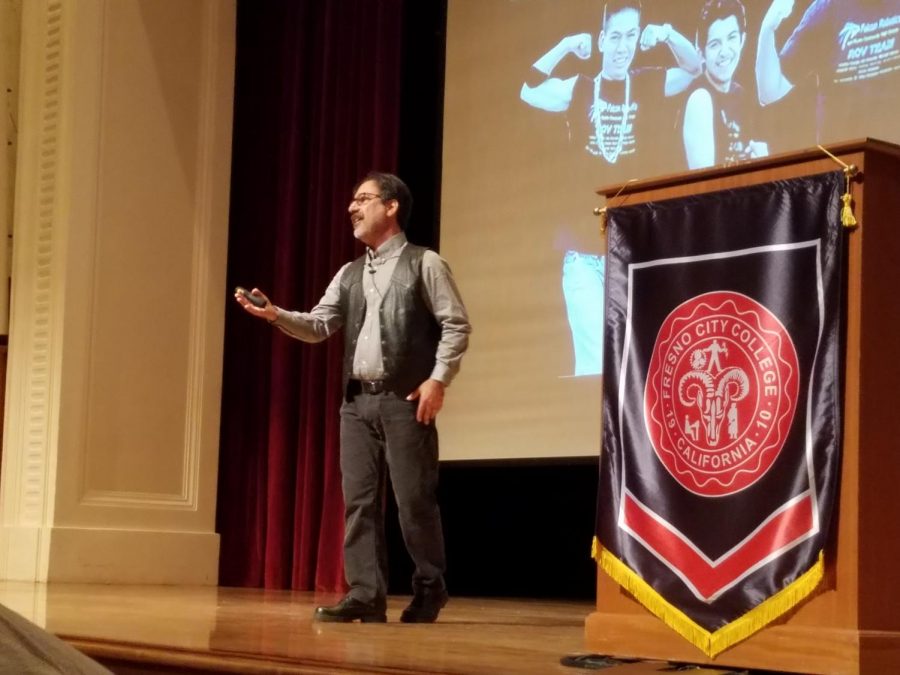 Fredi Lajvardi addresses the audience at the FCC Speakers Forum on Sept. 13.

“If life doesn’t give you a dream, build one.”

That was the closing statement from Fredi Lajvardi, retired science teacher and leader of national robotics competition winner, during his speech in the OAB Auditorium on Sept. 13.

The presentation focused on the successes of his robotics coaching career, teaching career and his inspirational and thought-provoking seminars based on his students, and his own experiences.

Lajvardi shared his story about his leadership and involvement in the national champion robotics team and their struggles and successes when he was a science teacher at Carl Hayden High School in Phoenix, Arizona, and eventually defeating highly regarded college programs, including MIT.

Carl Hayden High at the time was plagued by crime, poverty and a stigma of dead-end students. He supervised the installation of an electric vehicle racing club comprised mainly of students who were the first in their families to graduate. Lajvardi created interest in science where there was no interest before.

The success of the club at Carl Hayden High was immediately recognized, as they were the first high school to build and race full sized electric powered cars. This, however, led to the groundwork of his more prominent club – the robotics club.

After a while, the electric vehicle club transitioned to robotics. Entering a national competition in robotics building, Lajvardi entered the school into a competition, but not with other high schools. Instead, he chose to compete in the college competition.

“We learn the most when we fail,” said Lajvardi, reflecting on his decision to enter the competition with colleges. “We wanted their failures to teach.”

Despite his best efforts to teach by failure, the robotics team and their robot “Stinky” shocked the robotics world with their underwater robotics national championship. Carl Hayden High won the “judges award,” and an award for “best technical writing.”

Lajvardi has been the inspiration for the films, “Underwater Dreams,” “Space Parts,” (book and film), and he is featured in the recently released IMAX film “Dream Big: Engineering Our World.”