Sunshine Derek is Fighting for a Brighter Future 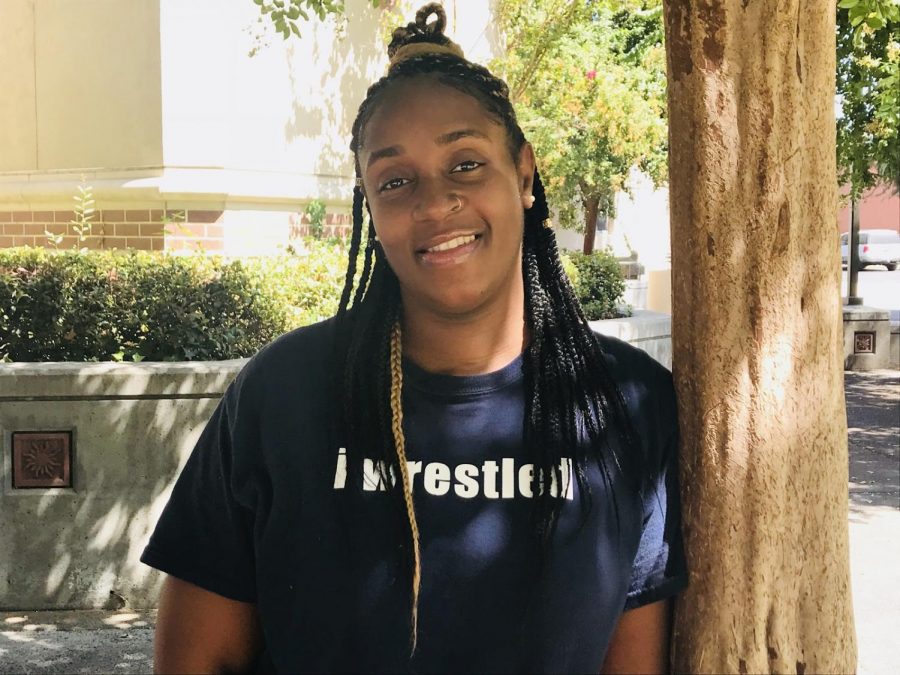 Sunshine Derek spent years isolated from the world in a strict religious sect.

Imagine spending two decades in isolation, no family, no friends, no contact with the outside world, and suddenly, you’re thrust into the hustle and bustle of modern life.

This is the story of Fresno City College student Sunshine Derek, 38 and her journey in starting her life over after spending decades under a strict Christian sect.

Growing up, Derek lived a typical American life. While working at a hospital following her high school graduation in 1998, she met a man. Derek got married that same year and soon found herself pregnant with her first child.

Derek’s husband, whom she prefers not to name, introduced Derek to a strict sect of Christianity which followed the Old Testament.

“We never really had a name for it,” Derek recounts. “It was just what we did.”

This sect would isolate Derek from the world. “When I met him, he was very religious. The more we got into it, the more secluded we became.”

Little by little, Derek would lose complete contact with her former life. She took up wearing a veil and avoided all contact with authorities. She avoided doctor visits and even homeschooled all her children.

This was her life for 18 years. Yet despite what seems like a complete alienation from society, Derek said she enjoyed it.

“I felt like I knew what I needed,” she said. “I knew what we needed.”

Derek’s fortress of solitude began to crumble when her youngest child was diagnosed with sickle cell anemia.

“The doctor tried to contact me,” she said. “I had to start taking him to doctor visits.” The doctor visits would lead to restoring some contact with the world.

Concurrently, Derek’s husband began to suffer a bout with paranoia, making false accusations against Derek. These accusations culminated into their divorce in 2017. Suddenly, after six kids and 18 years of marriage, Derek was forced back into mainstream society. She had no job, no car, no license, and a broken lease under her name from her ex husband in Texas.

“I was able to get a place with government assistance[Section 8],” she said. “It was like I was starting my life again with six kids.”

Sunshine’s first course of action was to enroll in school. “I started off here [Fresno City College] with 18 units. There were times I’d go to my room and cry.”

Nevertheless, she persisted and diligently worked her way to straight A’s, realizing along the way that “people were not stuck up and judgemental.”

After spending nearly two decades in seclusion, Derek was not prepared for the violence of her new neighborhood and her personal struggles.

”A guy got shot last July, and they left his body [in the neighborhood] for hours,” she said. “I didn’t let my children go out to play.”

The shooting profoundly traumatized Derek, and she spent nearly a year working through her fear. On July 2, 2018 another man was shot and killed in her neighborhood.

This fear inspired Derek’s “Get Out challenge,” a play on the movie “Get Out.” She said she started the “Get Out” challenge to help herself and her and children move to a new neighborhood.

She is trying to raise $4,600 to pay off the broken lease her ex husband left her with after renting out a house in her name in Texas.

Once she gets the lease paid off and moves out, Derek plans to help the neighborhood she currently lives in.

She also plans to write a book about her life.
“Had I not been through it,” she said, “I wouldn’t be who I am today.”

Derek says her life’s journey has been bittersweet but that she has no regrets.

“You can never judge another,” she said, “because you never know what someone’s been through.”