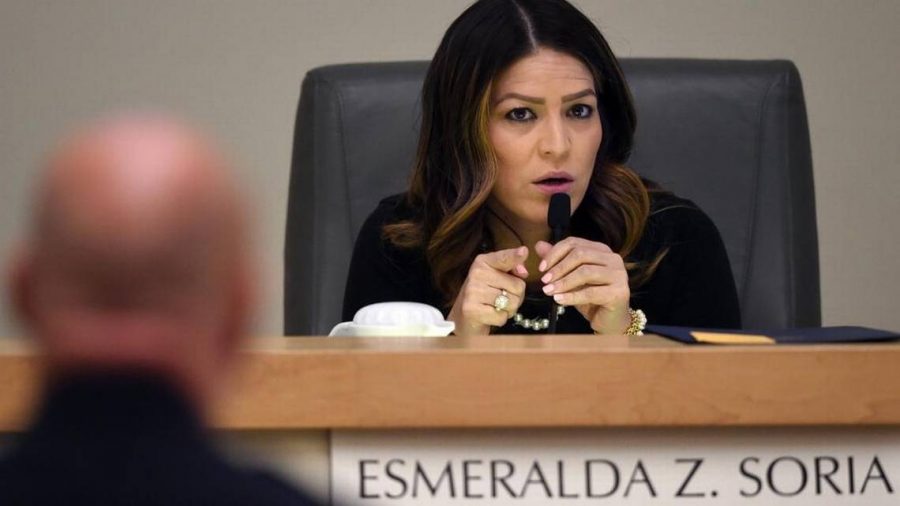 Photo courtesy of The Fresno Bee

Esmeralda Soria is Determined to Inspire

A previous version of this story incorrectly stated that Esmeralda Soria worked with Sen. Marco Rubio, and also that she worked with Barack Obama before he became president.

The first time Esmeralda Soria, Fresno city council president and Fresno City College instructor, applied to law school she was rejected. But she tried again, because that is what she does. “I ended up in law school, same thing with the [Bar Exam]. I didn’t pass the Bar the first time,” she said.

“But it didn’t mean I would kind of let go of the dream to actually be a licensed attorney,” she said.

Whether it was being the immigration lawyer, the policymaker who worked for President Barack Obama and California Sen. Michael Rubio, the professor teaching Fresno City College students, or the daughter of undocumented farm workers who immigrated to this country in the 70s, — Soria’s dream has carried her.

Born and raised in Tulare county, she knew early on that she wanted to make a change, to impact the lives of others. “I just kinda felt like I needed to, one, get my education, and two, get involved somehow, in some way shape or form,” she said.

“That kind of sparked my interest,” she said. “I guess I can trace it back to, you know, being in high school and realizing that if you’re not at the table, you’re on the menu.”

Her drive to be at the table took her to Berkeley, where she studied political science and Chicano-Latino studies, disciplines that she would later teach at Fresno City College. More than that, she began to network and gained internships that allowed her to work on policy, “like the policy perspective,” she said.

She worked on issues of safe drinking water, air quality, and environmental justice issues when she worked for the California Rule Legal Assistance Foundation in Sacramento. Eventually she would work for President Obama.

Despite her high profile, she eventually returned to the Central Valley. “Fresno seemed to be the right place to come back to,” she said. At the time, then-mayor Ashley Swearengin was pushing Measure G, a policy that would have privatized the city’s garbage collection.

Swearengin met strong opposition from not just the labor unions, “but other folks from the community,” who were opposed to the privatization, Soria said. “Because although it would save some money to the the city of Fresno for short-term purposes, long-term families would have been impacted by one, the hikes in prices,” she said.

“That was kind of my first moment where I was like, ‘you know what, I’m not appreciating how things were going.’ And I didn’t like that direction in terms of Measure G.”

So Soria did what she does: she got involved. Measure G was defeated.

She would eventually run for city council in 2014. Soria had some federal experience from her time in DC, also during law school, when she worked for Obama. But her focus, and her entry point, became local politics.

“You see these great policies passed at the state and sometimes at the federal level. But they don’t really trickle down and impact the community here, maybe in the most positive matter because they’re not being executed or implemented correctly,” Soria said.

She lost the primary. Well, she didn’t lose. She came in second, 30 votes short of first. And on election night that same year, “I actually was down 20 votes when they called it a night,” Soria said. But when the absentee and light ballots were tallied later, she managed to close the gap and triumph with a 600 vote margin.

“I became the first Latina president of the council,” she said.

From her seat, she managed to open a grocery store in a food desert via the supermarket on Clinton and Weber, as well as a park west of Highway 99. Day to day, her council saw more streets and sidewalks paved, and a deal struck with the fax buses to allow student travel and mobility.

But she seems most proud of one of her earliest, and smallest accomplishments. When Soria was sworn-in, one of her friends, a mother, had to go to the restroom to change her child’s diaper. There were no changing tables, and she ended up using a blanket and changing the baby on the floor.

Soria saw to it that changing tables were added to both the male and female restrooms at City Hall. She beams when she talks about it now. “We did that, and we did a small family room and a nursing room,” she said.

Sometimes it’s the little things. Local government can seem like a little thing. Soria emphasizes its importance. “Being able to teach the students [at Fresno City College] that I have the importance of local government,” is one of her proudest accomplishments, she says. “I don’t remember thinking [when I was in college] about how important local government is in our everyday life, and how we’re so intimately connected.”

She said one of her political science students sent her a message. “[He] told me how much I motivated him when he was in the classroom.” He was pursuing a law degree because of her encouragement, and because of the path she presented.

Soria also saw the development of a youth commission, a collection of 15 to 22-year-old members who serve as mini-council members, meeting once a month to discuss issues relevant to young people and pass those messages along to the City Council.

Working with and inspiring young people is a theme in Soria’s life, in her role as a councilwoman and as an educator. “Just today I went to Pyle Elementary, I spoke to fifth and sixth graders to motivate and empower them,” she said.

Soria is running unopposed in her city council primary, and she will continue to return to Fresno City College to teach political science and Chicano-Latino studies. “Even if I make an impact just on one student every semester, for me it’s extremely rewarding.”