Veterans Ceremony Shows That ‘No One Who Serves is Alone’ 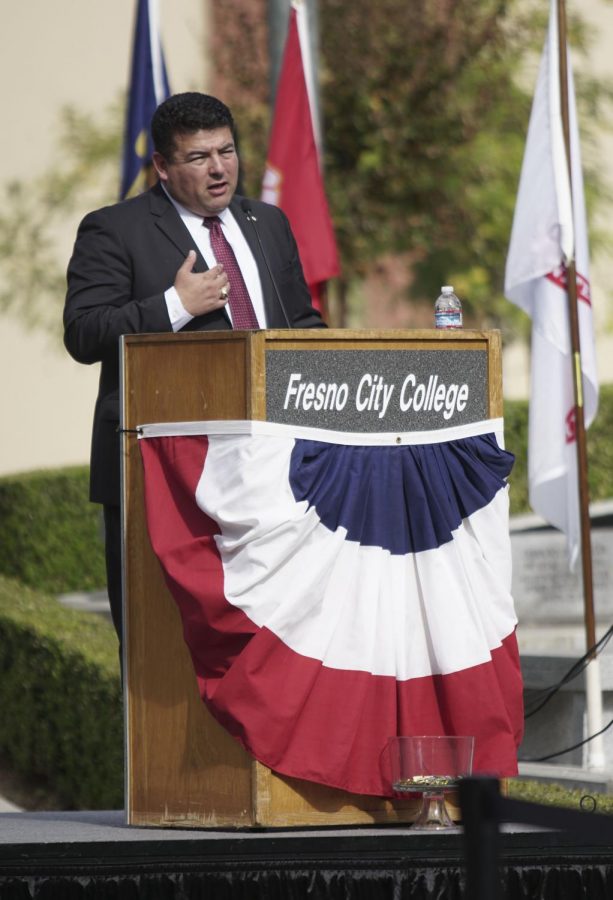 Keynote speaker Lt. Col. Lorenzo Rios speaks about his time as a veteran for the FCC Veterans Day ceremony on Friday, Nov. 3, 2017

Fresno City College held its annual Veterans Day Ceremony in front of the cafeteria on Nov. 3.

Veterans of all ages and from all branches of the military were honored at this prestigious event.

The ceremony began with an introduction by the master of ceremonies, Sean Henderson, Dean of Student Services. The Fresno State Army ROTC then performed the presentation of the colors.

Leading the attendees in the Pledge of Allegiance were FCC students Veterans Nikko Falcon and Keith McDaniel.

Soon after, a UH60 Blackhawk Static helicopter flew over the campus and landed in the softball fields behind the gymnasium, allowing students and attending visitors to go and take a look.

FCC president Carole Goldsmith welcomed all veterans who attended, thanking them for their service.

As the FCC Concert Band played a medley of patriotic tunes, Dean of Instruction Neil Vanderpool saluted each armed forces branch, asking those who could to stand up to be recognized for their service.

Rios is the chief executive officer of the Clovis Veterans Memorial District. He served a distinguished 23 years in both the U.S. Army and the Marine Corps.

He delivered a message of positivity and encouragement, recognizing all veterans and community members alike. The point of his message is that we all have, and will play a part in making this the great country that it is.

“Although we may not all be perfect, we all work together to form a more perfect union,” Rios said.

“We the citizens are here at home not knowing what service men and women have to go through. Through their fight, they have made sure we can live normal lives,” Rios continued. “Events like this help veterans by connecting them to the community and showing people who they are.”

Julissa Fuentes, a veteran and a student said it’s a great experience seeing people come together at veterans events. “It shows the camaraderie that we learn in the military and it shows that no one who serves is alone.”

Veteran Frank Renteria, says it is important veterans reflect this time of year. In 1968, he enrolled at FCC after coming back from Vietnam.

“Not all of our scars are on the outside, but I am blessed that I am here standing,” said Renteria.

“I remember being right here in front of the cafeteria while protests about the war were going on, but I had a very different perspective than them,” said Renteria. “You get lost trying to adjust and you do not know what you want to know.”

If you or someone you know is a veteran and might not have things figured out, the FCC Veterans Resource Center always has its doors open.

“There is plenty of help here at FCC,” said Rios, “and this is a quality education that you can count on to help you get where you want to be.”